Garett Saye says he joined the San Jose Police Department because he longed for a more fulfilling job than the one he held down at his family’s semi truck dealership for 15 years. “I wanted to be a part of something bigger than myself and help out the community,” he said. “Law enforcement is a brotherhood. Everyone takes care of each other.”

Six weeks into training at the academy, Saye and his fellow recruits got a chance to pay that sense of community forward by volunteering at the African American Community Service Agency (AACSA) to feed the homeless on Thanksgiving Day.

“It’s awesome to see the community coming together, just giving back to people and helping people in need,” Saye said.

Throughout the holiday event, police recruits helped Martha’s Kitchen serve meals and handed out sanitation packages for homeless people while nonprofits Community Seva and Sacred Heart Community Services donated rain ponchos, gloves, socks and beanies for people to stay warm and dry during the impending rainstorms. Other service providers, including HomeFirst, First 5 Santa Clara County and PATH, set up tables with pamphlets about how to access housing assistance.

SJPD Chief Eddie Garcia said he hoped the event helped dispel perceptions of an adversarial relationship between law enforcement and the homeless.

Great day for our academy recruits, as they helped feed those in need in our city. @ AACSA, Sacred Heart and Martha’s Kitchen. Our expectation is to take the criminal element off the street AND build community trust. These concepts are not mutually exclusive. pic.twitter.com/VLtvzTNSM2

“[We’re] coming out here to speak to our unhoused community and say, ‘Hey, we’re here as a friend, we want to keep you safe from other people,’” he said at the event. “‘We know that there’s unhoused criminals that are preying on other unhoused people. But if you’re unhoused and you’re not conducting criminal activity, you have nothing to fear from this police department.’ It’s not going to be easy. It's not going to be overnight. But that’s the message we’re trying to send.” 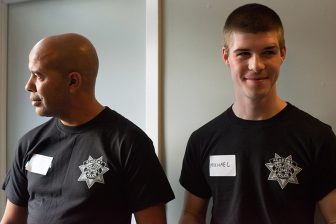 CHAM Deliverance Ministry Pastor Scott Wagers, who’s been embedded with San Jose’s Street Crimes Unit as an advocate for the homeless, said he’s joined them in patrols of the creeks where many of the city’s unhoused residents live. “I make sure everything’s cool between the cops and the homeless,” Wagers assured. “Cops are doing a good job, but they can’t solve the problem.”

The bigger question, he told San Jose Inside, is: “Why can’t we find more resources to put them into housing?”

Edward Ortega, who said he’s been living in his car, showed up to the outreach event to pick up some much-needed supplies. “We’re just surviving and here we are,” he said.

In San Jose, and Santa Clara County as a whole, the homeless population has continued to grow faster than local governments and service providers have been able to house people. That’s a life-of-death problem, Wagers emphasized.

“They’re waiting on housing,” he said of the people he serves, “and if they don’t get housing, they die. People are dying on the streets in record numbers. We need more than this. We need to figure out how we’re going to get people indoors, out of the creek beds and out of horrible conditions.” 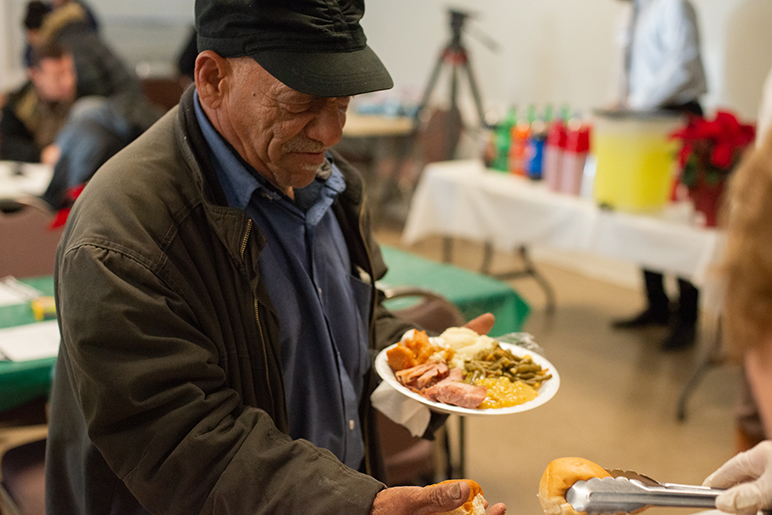 Scores of homeless people lined up for a Thanksgiving meal at last week's event. (Photo by Nicholas Chan)