This story has been updated, at 7am Thursday, Jan. 12, with rockslide video (below).

Gov. Gavin Newsom toured the storm-ravaged Central Coast Tuesday, promising aid for flood and high surf damage and warned of a difficult weekend on the coast and in nearly stranded mountain communities.

“We’re not out of the woods – we expect these storms to continue at least through the middle of next week with a minimum of three more atmospheric rivers hitting our state," Newsom said in Aptos. "California is soaked and even an inch more of rain can bring catastrophic impacts like flooding and mudslides. These conditions are serious and they’re deadly and we want all Californians to be mindful and follow all guidance from local emergency responders.” 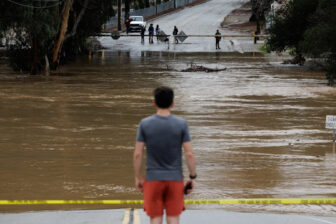 The Biden administration announced late Sunday that President Joe Biden had approved a request from Gov. Gavin Newsom to declare a statewide federal state of emergency because of the continuing "atmospheric rivers" pummeling California. The federal designation followed a statewide declaration by the governor last Wednesday.

The entire Bay Area remained under a flood watch and a high wind advisory through Thursday, Jan. 11, with areas of greatest concern along the coast and in the North Bay, according to the National Weather Service. The California Water Resources Board reported today that water levels in the Guadalupe River, which had reached 13.77 feet in San Jose, approaching the 15-foot flood stage, Monday evening, had dropped to below 10 feet by midday today.

The storm that brought more wind and rain late Sunday into Monday, and the rain and wind was predicted to be even worse tonight into Tuesday.  Tonight willl bring more rain, thunderstorms and windy conditions, according to the weather service.

Page Mill Road will be closed from 8am-5pm today and Friday, while crews repair a sinkhole along a stretch of the road between Paseo del Roble Drive near Moon Lane and Arastradero Road in the town of Los Altos Hills, according to Palo Alto police.

State Route 92 was closed early this morning in both directions along a 4-mile stretch between Skyline Boulevard and west to Pilarcitos Creek Road.

Those outage totals are significantly higher than they were Monday evening, according to PG&E, because of an overnight weather system that brought lightning as well as wind gusts of up to 70 mph to the region. Just 10,703 PG&E customers were without power as of 5 p.m. Monday. Updated information can be found at the PG&E outage center.

Utilities had reported 400,000 customers without power across the state on Sunday.

Mudslides closed southbound lanes of Highway 17 in Santa Cruz County on Monday, but CalTrans reported the highway open this morning.

A thoroughfare in Gilroy was closed Tuesday morning due to downed power lines, police said. Monterey Road was closed in both directions between Ronan Avenue and Pierce Street, Gilroy police said in an alert shortly after 6:45am.

All Santa Cruz County schools and UC Santa Cruz were closed and residents were ordered to shelter in place, ahead of today’s worsening weather conditions.

A 61-year-old Ben Lomond man died in a one-car crash on Highway 17 near Scotts Valley  Sunday morning.  Also on Sunday morning, one man was killed in a two-car wreck at Blossom Hill and Belgatos roads in Los Gatos.

UCLA climate scientist Daniel Swain warns that the next atmospheric river will be “unusually unstable” with “quite a lot of thunderstorm activity.”

“Expect to see the worst of it still in front of us,” Newsom said Sunday.

The National Weather Service predicted high winds, gusting to nearly 50 miles per hour tonight through Tuesday, accompanied by heavy rain and thunderstorms. The rain, while tapering off, is to continue through the weekend.

That’s a scary prospect for thousands of Californians, who live along rising rivers or on the coast or in areas scarred by wildfires.

In the last 10 days, 12 people have died in California storms and flooding — more than the number of civilians who died in wildfires in the last two years.

Newsom also said he sought the seeking a federal emergency declaration to get “the full support of the federal government in our efforts, which we have all the confidence that we’ll receive based upon the conversations with the White House.”

Newsom announced Sunday that he will include an additional $202 million for levees and other flood protection in the proposed state budget he plans to unveil Tuesday.

That would be on top of more than $700 million in flood infrastructure California has invested in since 2019, according to Wade Crowfoot, secretary of the state’s Natural Resources Agency. The federal government has also put in $2.4 billion since then, he said.

Crowfoot said, “But let’s not let’s not sugarcoat it. While we are deploying some of the world’s most advanced technology to predict the threats we now face, Mother Nature is full of surprises. So it’s clear that we have to be ready.”

Newsom’s declarations followed another in a series of strong “atmospheric river” wind and rain storms that ripped through the Sacramento region late Saturday and early Sunday, leaving swaths of downed trees (including near the state Capitol) and widespread power outages in its wake and increasing the threat of catastrophic flooding.

As of Sunday afternoon, 20,000 people had been evacuated and more than 400,000 customers, were still without power, said Nancy Ward, the just-appointed director of the Governor’s Office of Emergency Services. The weekend storm caused at least one death — a homeless woman reportedly hit by a tree in Sacramento.

Here is a list of resources for flood-related assistance:

San Jose Inside added  weather updates to this story. CalMatters, Bay City News and The New York Times also contributed to this story.