Arturo Villareal opens his new book with a quote from Uruguayan journalist Eduardo Galeano: “History never really says goodbye. History says, ‘See you later.’” It’s a fitting reminder for a piece of history that had been obscured almost entirely.

Jose Manuel Gonzales, recently published by Chusma House, is a brief but profound corrective to the historical record, the biography of San Jose’s second mayor (the first to serve a full term): a full-blooded Apache. “That’s unheard of, an Apache mayor,” Villarreal says. “And the more I dug, the more I realized there was so much more.”

In 1776, months before the Declaration of Independence, Jose Manuel Gonzalez came to the Bay Area with the De Anza expedition. A settler-soldier from Sonora, in what is now Mexico, Gonzales was a private in the Spanish colonial army before serving as alcade (mayor) at el Pueblo San Jose de Guadalupe.

But like The Purloined Letter, Gonzales’ significance to the city of San Jose has often been hidden in plain sight. A plaque mounted next to the Peralta Adobe House describes the landmark: “The last vestige of El Pueblo de San Jose de Guadalupe, the simple adobe, rehabilitated in the mid-19th century, is believed built before 1800 by Manuel Gonzalez, an Apache, who was one of the pobladores (founders).”

Mounted in 1976 by the San Jose Historic Landmarks Commission, the plaque does name Gonzales, but only as the builder of this “simple adobe.” Nothing is said of his status as mayor, or that he was the structure’s original inhabitant, living in it until his death. Instead, the information is presented as if Gonzales was a construction worker.

For years, this was the only mention of Gonzales posted near the home he built. Then, in 2011 San Pedro Square Market was built around the adobe. At that time, an information display erected by History San Jose helped to better explain his significance. It read, “The adobe in front of you was constructed by Manuel Gonzales, an Apache Indian, member of the De Anza party, and one of San Jose’s first alcades, or mayors.” 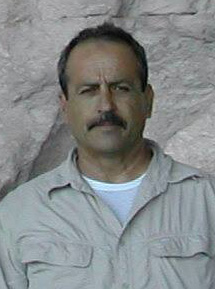 Over the years, Villarreal had seen the plaques, and they both stuck with him. Then, while researching for Mexicans in San Jose, a photo book co-written with Nannette Regua, he noticed them again.

“I was working on the first chapter, which deals with the founding of San Jose. It took me back to the Peralta Adobe House, and once again, there was that plaque staring me in the face,” he says. “It was haunting me, you know. I thought, ‘I got to get this person out. People need to know about this Apache man.’”

In addition to being one of San Jose’s first leaders, Gonzales helped build the Presidio in San Francisco, where his family were some of the first residents. Afterward, as part of unit known for its agricultural skills, he traveled down to San Jose, founding the city along the Guadalupe River. To this day, the one remaining structure still standing from San Jose’s original pueblo is one Gonzales hand-built: the Peralta Adobe House.

“I said, ‘I gotta write an article.’ Maybe submit it to NACCS, “ the National Association for Chicana and Chicano Studies, Villarreal recalls. “Then more information presented itself and it was like, ‘I got enough for a little book here.’”

Though it is slim, Jose Manuel Gonzales paints a remarkable picture of one of San Jose’s founders—one that had a nearly been painted over—and a unique figure in American history in general. Not only was Gonzales one of San Jose’s first mayors, he is one of the very few native mayors in U.S. history. Aided by Villarreal’s clear, concise prose, Jose Manuel Gonzeles (the first biography published on its subject), is an important contribution to history, local and beyond.

But the author has a remarkable story of his own.

An anthropology and ethnic studies professor at Evergreen Valley College for the last 29 years, Villarreal was born in the 1950s to a family of migrant farm workers. He was only 6 years old when he began working San Jose’s prune fields.

“When you’re that young, you don’t work that hard,” he says. “You work in the shade. But you do have to work.”

Villarreal’s family came to California from the small border town of Del Rio, Texas, and all throughout his youth Arturo travelled back and forth to Texas. There, up until he was a sophomore in high school, he attended segregated schools.

“It was very different than it was here,” he says, “though I do believe that that informed my future education. I was always aware of the different ethnic groups here as opposed to over there, and why is it segregated over there and more open here. That always captured my attention.’”

Every summer, the Villarreal family returned to San Jose, staying with relatives and working the prune fields, getting paid by the box for their labor. Eventually, his mother started working in the canneries that once defined Midtown and North San Jose. After high school, Villarreal stayed in the Bay Area, earning an AA from San Jose City College before transferring to San Jose State, where he obtained two bachelor's degrees and a master’s in social science.

“Learning about all these different cultures that I had encountered over the years, I was intrigued by that. Anthropology gave me that platform,” he says.

Today, Villarreal’s work mostly focuses on pre-Columbian societies, indigenous peoples and the history of California before its colonial days. But with two books on San Jose history now published, he is also becoming an important voice in documenting the city’s past, fleshing out our understanding of a city with a unique history.

Without asking it directly, one of the most important questions raised by Jose Manuel Gonzales relates back to San Jose’s first historic landmark: the Peralta Adobe House. Considering that it was built by a boundary-breaking San Josean, one of the city’s first politicians and one of the few visible native politicians in U.S. history, why would the Peralta House be named after it’s second inhabitant? It is often said that white supremacy isn’t just Klan robes and hoods; it is also the systematic rewriting of history to highlight the narratives of white peoples above all others.

“I like to give people the benefit of the doubt,” Villarreal says. “Maybe they just didn’t understand beyond the fact that he built it and that he was a settler, that he was so much more.” As our chat comes to an end, he continues: “I think about our Native American population. I wonder, when do they hear about their heroes or their figures—whether they’re heroes or not? Native Americans of significance. They don’t get that.”

Historically, they haven’t. But history has a way of saying, “See you later.”