Santa Clara County says it has doubled the rate of COVID-19 testing in just two weeks, but has a new goal of tripling the number of daily tests.

“We will need full participation of the other providers – the hospitals and community clinics” to be able to do 15,000 tests per day, reported Dr. Martin Fenstersheib, COVID-19 testing officer for the county Public Health Department, as he revealed the county’s new testing goal. In mid-June, he had hoped for 4,000 tests per day.

Two weeks ago, a frustrated Fenstersheib reported testing rates of about 2,400 per day, far below public health goals, and he laid part of the blame squarely on poor cooperation from private healthcare systems.

To force the issue, the county on June 10 announced that all private health clinics and hospitals in the county would have to immediately provide “diagnosis on demand” to citizens in three categories.

On Friday, Fenstersheib told the Health and Hospital Committee of the county Board of Supervisors that while the county is now testing more than 5,000 people daily, the Big Three healthcare providers in the county—Kaiser Permanente, Palo Alto Medical Foundation and Stanford Health Care—need to do more.

The county has added sites for the tests, and added early evening and weekend hours, as the number of tests continues to grow. In downtown San Jose, a free test site at the SAP center will be open from 9am to 3 pm Saturday, June 27.

The county’s COVID-19 dashboard reported today that 173,977 diagnostic tests of the coronavirus had been given in the county, with 4,724 positive results.

The dashboard also reported that the number of COVID-19 cases in the county continued to grow, and not just from increased testing. As of today, the count is up to 4,162 total cases and 155 deaths, with 82 still hospitalized.

Fenstersheib said the increased test numbers show that other hospitals besides the county-owned Valley Medical Center are picking up their pace of testing.

The June county order stipulates that any person who has symptoms of the coronavirus, any person who has been exposed to a known case of infection with the virus or any person who works in a “frontline” job such as a bus driver, grocery clerk or health care or public safety worker “should be given a test if they request it,” regardless of symptoms.

Kaiser Permanente and Stanford Health Care said in response to the latest county concerns that their testing is increasing. The Palo Alto Medical Foundation declined a request for details.

“We agree with the importance of testing and support the call for health care providers and private labs to do even more testing,” Kaiser Permanente said in a written response to questions from San Jose Inside. “We continue to increase our testing capability to support Kaiser Permanente members and the counties where we operate. We are offering COVID-19 testing through multiple venues including drive-through, our medical office buildings, emergency departments, and hospitals.”

The Oakland-based healthcare provider that serves nearly 40 percent of all health consumers in Santa Clara County said it is complying with all components of the county order: testing all patients with COVID-19 symptoms and most asymptomatic patients, including: first responders, health care workers, and other occupations at high risk for exposure; people at high risk due to age or certain medical conditions; anyone in close contact to a person with confirmed COVID-19; residents and employees of congregate living facilities; Kaiser Permanente patients prior to surgeries and certain procedures; and people who have attended large-scale events.

“We take a tiered approach to testing, and occasionally have to turn off testing for a certain tier if demand is greater than supply,” the statement continued. “But we have been able to consistently test all of the groups mentioned, including any Kaiser Permanente member requesting a test, for the last several weeks.”

Stanford on June 25 reported substantial increases in its COVID-19 testing, and not just for its own patients and staff. The Palo Alto-based healthcare system reported this week it had conducted a total of 88,701 tests of 73,497 people, reflecting multiple tests of medical staff, with 2,239 people testing positive. More than 23,000 people who were non-Stanford patients were among the totals.

“Since the beginning of the pandemic, Stanford Medicine has been committed to supporting COVID-19 testing for the greater Bay Area community and to date has partnered with medical facilities across 14 northern California counties,” she said.

Stanford’s own COVID-19 test was approved by the Food and Drug Administration on March 4, she said. “We are also actively working with several skilled nursing facilities in Santa Clara County to provide surveillance testing as recommended by the county. These facilities reached out to us through the intake form on our COVID-19 testing website.”

The county opened its first “pop-up” testing facility just a month ago. This week, multiple pop-up sites accounted for more than 2,700 tests daily. The county is hiring more laboratory staff and buying more equipment to speed up the testing process. “We need to get the message out to the greater community basically to reinforce the message and to direct them to where they should be able to receive a test,” Fenstersheib said. 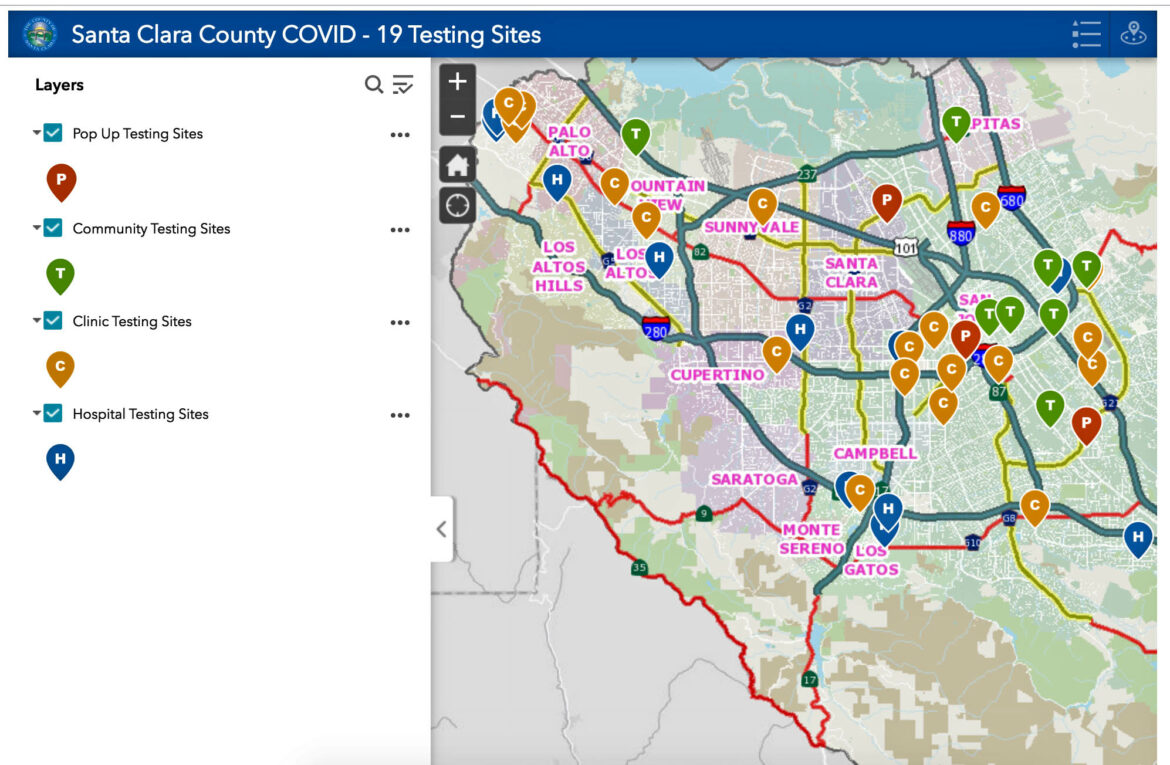