A campaign mailer painting Milpitas Mayor Rich Tran as a communist seems to have backfired by drawing fierce condemnation on whoever sent the offending literature.

The first-term mayor, who’s defending his seat against four challengers, linked Councilman Anthony Phan to the hit pieces, one of which overlays a photo Tran on the Vietnamese flag with a question that translates to, “Who is this yellow star going to be fighting for?” The other side features images of a Ho Chi Minh statue and a Catholic priest detained by Vietnamese police.

Mayor Tran said the attacks are an affront to his family and particularly his mother, who risked her life by fleeing war-torn Vietnam. In a Facebook post Sunday, Tran said his aunt died on the journey and his mother only survived because she was rescued at sea.

“This hate mail cannot be any more painful for my family,” he wrote. “What hurts even more, is that I’m actually a member of the United States Armed Forces, swearing my life away to protect and serve our country.”

Tran said he points the finger at Phan—a fellow Vietnamese American—because the South Bay SV Community Coalition PAC, which authorized the mailers, shares a phone number with the councilman and his consulting firm Invictus Strategy.

“He is responsible for the hate mailer associating me with the communist Vietnamese government,” Tran wrote in Sunday’s status update along with a screenshot of the mailer. “It’s just as extreme as if it were the Ku Klux Klan or the Nazis, in the Vietnamese-American refugee community.”

The mayor demanded that Phan relinquish his council seat—or else.

“If he does not resign, I will personally walk across Milpitas to get every signature I need for a recall,” Tran told San Jose Inside in a phone call Monday. He later added: “I knew I should have never accepted his friend request on Facebook.”

Vietnamese-American San Jose Councilman Lan Diep penned an open letter that echoed Tran’s denunciation. “I will leave it to the voters in Milpitas to decide whether Mayor Tran deserves a second term,” Diep wrote. “However, this Vietnamese-language mailer attacking him deserves special condemnation.”

Linking Tran to communism diminishes the suffering of Vietnamese refugees, Diep continued. Though the Vietnamese community has come a long way since first arriving in the U.S., he said time has not healed the trauma of losing their homeland to an oppressive regime. While red-baiting may be ineffective to most Americans, Diep explained, it’s painful and triggering for many Vietnamese Americans.

In San Jose, mailers emblazoned with the Vietnamese flag and a photo of Magdalena Carrasco arguably cost the future vice mayor the 2010 election against District 5 Councilman Xavier Campos. Whoever resorted to the same tactic in Milpitas did so knowing full well the pain, confusion and outrage it would cause, Diep said.

“The South Bay SV Community Coalition PAC recognizes the Vietnamese American community’s suffering at the hands of communists, and intentionally sought to exploit that pain for political gain,” he wrote. “Instead of helping the Vietnamese American community move forward, the authors of this mailer have sought to move the community backwards. Such actions are the result of poor judgement and a wicked heart.”

In addition to landing a low blow, the mailers’ sender may have violated election laws. Tran’s campaign manager Justin Lardinois filed a complaint with the Fair Political Practices Commission claiming that the South Bay SV Community Coalition failed to file the proper disclosure forms with the City Clerk’s Office.

Phan initially declined to comment when reached via text Monday, but he defended the attack ads in a statement emailed later in the day on behalf of the PAC.

“The mailer criticizes certain actions committed by Tran as undemocratic in nature and disrespectful to not only the Vietnamese community in Milpitas, but also throughout the United States,” the PAC press release reads. “Such actions include Tran’s attempts to extend own mayoral term, Tran’s negligence of disclosing communications received from the Vietnamese government, Tran’s disregard for open-meeting laws, Tran’s perversion of the Vietnamese Heritage and Freedom Flag (by wearing it as a towel and having it touch the ground), Tran’s censorship of dissenting views on social media.”

Phan acknowledged that the mailer was provocative, but that it counts as free speech.

“Literature critical of officials in authoritarian governments, such as Vietnam, is explicitly banned,” the statement continued. “Retaliation and harassment is almost guaranteed by those criticized. Even coverage of such controversy by journalists, similar to what you are reading right now, is not permitted. South Bay SV Community Coalition PAC condemns government retribution of adversaries, we stand in solidarity with dissidents and journalists currently detained by the Vietnamese government, and we call for their immediate release.”

This article has been updated to include a response from Phan. 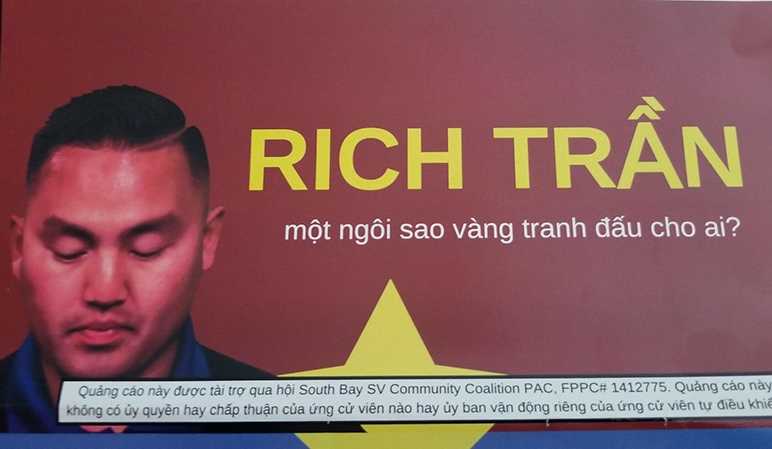 It's unclear how many of these mailers were sent to Milpitas voters over the weekend. (Source: Facebook)