The '60s civil rights struggle arrived in the '70s to San Jose, and into that environment came police chief Joseph McNamara.

“Like a whirlwind,” said former mayor Tom McEnery, who spoke Thursday at McNamara's memorial service, which was held at the California Theater in downtown San Jose. Despite political opposition and backlash from officers, McNamara rolled out a series of reforms decades ahead of his time, McEnery said, repairing the relationship between cops and the community while turning the San Jose Police Department into a national model.

Some 200 attendees—many of them former officers—came out to honor McNamara, the “father of community policing,” who died Sept. 19 of pancreatic cancer. He was 79.

Former subordinates, many of whom became police chiefs themselves, said his leadership and forward-thinking policies revolutionized the agency.

He “fundamentally and forever reshaped and led the creation of the finest police department in the country,” said Scott Seaman, a retired Los Gatos-Monte Sereno police chief who first met McNamara as a first-year officer in San Jose assigned to research and development, which meant working directly with the chief.

“Joe was a man deserving of superlatives,” Seaman added.

McNamara restored trust in the community. He incentivized advancement by implementing a policy to re-assign officers every few years so they could become competent in a variety of roles. That policy “was the foundation of our success,” Seaman said, noting that 28 former San Jose officers went on to lead departments around the country, including in New York City.

"His DNA is embedded in all of us," he said.

Personally, McNamara was competitive and loved a good debate. He was a risk-taker, a barrier breaker, a crime novelist and a nature-lover, both academic and street smart, a veteran of a tough Harlem beat and a graduate of Harvard.

“Twenty years ahead of his time is not the wrong way to characterize Joe,” Seaman said.

After retiring in from the SJPD 1991, he became a research fellow at Stanford’s Hoover Institution, where he studied issues that greatly concerned him: railing against the war on drugs and militarized police while advocating for gun control and community policing.

Rob Davis, who served as San Jose police chief from 2004 to 2010, said he meant to work as a cop in his early 20s only briefly, to pay his way through law school. But he found working for McNamara so professionally exciting that he pursued a decades-long career in public safety.

“Even now, the city has a low crime rate with absolutely the lowest ratio of police officers,” he said, crediting McNamara’s policies for the efficiency, despite the agency having the lowest officer-to-resident ratio of cities comparatively sized.

But McNamara’s ideas weren't fully welcomed when he first came to the department in 1976, with the agency was embroiled in accusations of brutality and racism. He was 41 at the time; people called him the “boy chief.”

Lou Cobarruviaz, who succeeded McNamara as police chief, was assigned to repair the relationship between police and Latinos. There were riots, rocks and bottles thrown. Officers working with the community were considered traitors among police ranks, while minority cops were treated like traitors to their communities.

“It was a thankless job,” Cobarruviaz said, adding that if it hadn’t been for McNamara, he would have quit law enforcement. “I strongly considered other professions.”

McNamara supported Cobarruviaz’s work, giving him the encouragement to continue.

“Things started to change,” Cobarruviaz said. “I stayed on the job and had a wonderful career.”

Officers who didn’t value the idea of community policing were denied promotions. He raised standards for conduct and expected officers to apply for promotions, rise up the ranks and learn skills from varied assignments.

McNamara’s sweeping changes drew the ire of the police union, which gave him a vote of “no confidence,” and the consternation of city leaders—four of seven council members wanted him fired. Some officers made a bunch of T-shirts that read: “Will Rogers never met Joe McNamara,” a riff on Rogers’ famous assertion that he never met a man he didn’t like. At one point, to protest the new rotational assignment police, officers staged a sick-out.

“We all admired his intelligence and ability, but sometimes it got to be too much,” former Police Officers’ Association President Carm Grande joked.

That early opposition faded away once the policies began to transform the agency, elevating it to an example for other departments and turning San Jose into the safest big city in the U.S.

McNamara’s daughter, Karen McNamara Rust, painted a more personal picture. Months before his death, he enjoyed a rare moment with all four of his grandchildren, some visiting from Alabama. He couldn’t get on the floor to play with the kids like he used to, she said.

“He sat in his chair and watched the kids play with their train set,” she said. “You should have seen the content look on his face.”

McNamara is survived by his wife, Laurie, a son, two daughters and those four grandchildren. 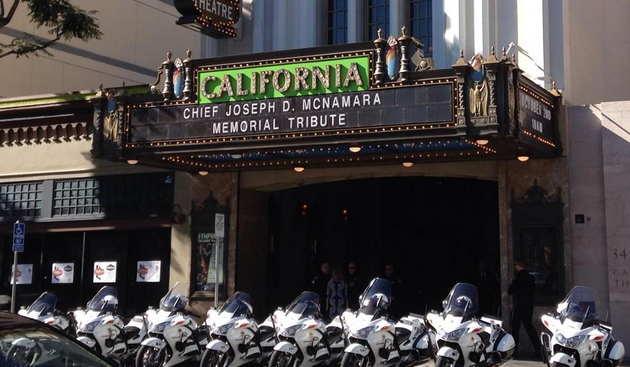