San Jose’s mayor and some council members said they want greater oversight of local law enforcement and would support a ballot measure to expand the role of the city’s independent police watchdog.

Before a packed auditorium at Bible Way Christian Center Thursday night, Mayor Sam Liccardo said he supports placing such a voter initiative on the 2018 ballot.

“Back when the charter was amended, establishing our office in 1996, I think the IPA’s model was really the standard,” Independent Police Auditor Walter Katz told San Jose Inside. “But it’s been 20 years since then, and I think there’s some voices in the community that say it’s time to reconsider.”

Along with City Council members Magdalena Carrasco and Raul Peralez, the mayor and police Chief Eddie Garcia also promised to release public reports on use-of-force incidents, a practice that was discontinued in 2006.

“I know that one of the holdups right now has been the technology itself,” said Peralez, a former San Jose police officer. But, he added, “This is information that absolutely needs to be shared with the community.”

The commitments came at the end of a forum on how to mend the relationship between police and civilians whose faith in law enforcement is badly shaken. Hosted by People Acting in Community Together (PACT), the event drew roughly 300 attendees and a host of high-ranking law enforcement and elected officials.

Garcia opened the discussion by talking about how bias in law enforcement is an extension of entrenched structural racism.

The department is trying to improve its internal oversight, the chief added. Part of that includes training officers on how to recognize their own biases. Garcia also apologized for any offense caused by a video released in November by the local police union. The minute-long clip released by the San Jose Police Officers’ Association highlighted the uptick in officer killings ended with declarations that “All Lives Matter” and “Blue Lives Matter,” slogans created to protest the Black Lives Matter movement.

“We’re not perfect,” Garcia said. “We will have bumps along the road, but in the end we need you to know that we are here for you.”

Speaking to issues of accountability at the regional level, Santa Clara County Supervisor Joe Simitian said he wants to install independent oversight of the jails and Sheriff’s Office, too. In the aftermath of Michael Brown’s killing at the hands of a police officer in Ferguson, Missouri, the supervisor pushed for a slate of accountability measures to prevent similar tragedies. Some of those changes include training sheriff’s deputies to recognize implicit bias and wear cameras to record their interactions in the line of duty.

“I’m sorry,” Le said. “At this time, I cannot support that decision.”

Newly installed cameras capture events inside the jails, she added, and officers document every incident as they occur. That, in her and the union’s opinion, is enough.

“Give us a chance for transparency,” Le said. “The use-of-force system is changing. We are documenting everything.”

Between Garcia’s initial remarks and public declarations from other officials, the audience split into smaller groups, each assigned an officer who volunteered to hear them out. Elvira Obregon, a social worker and local activist, asked one officer to explain why so many viral videos show police escalating tensions to the point of violence.

“A lot of times in these videos, the situation doesn’t call for that level of force,” Obregon said. “We hear all this talk of de-escalation, but that’s not what’s we’re seeing.”

Officer Jose Montoya, a 17-year SJPD veteran, told her that he can’t speak for other agencies but stressed that those videos often tell just a fraction of the story.

“You must admit that there’s some rotten apples in the bunch,” Obregon replied.

“Yes,” Montoya agreed, “as there is in any profession.”

“Would you be brave enough to call them out?” she asked. 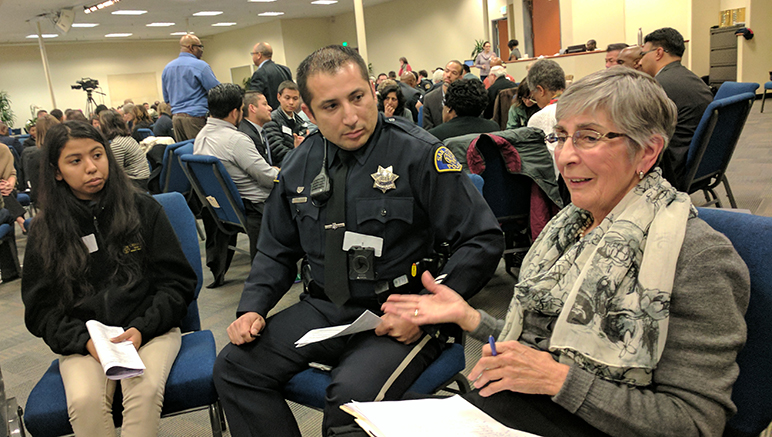 Officer Jose Montoya (center) listens as Carmen Johnson (right) talks about a negative interaction she had with a San Jose police officer.