On his first trip back to Madrid after November’s election, Miguel Lepoutre’s family itched for details. He recalls one incessant question, in particular: What is it like now that Trump is president?

“Everyone in Europe is just freaking out,” Lepoutre says. “They can’t believe it’s real.”

Lepoutre is an international student at San Jose State University (SJSU), where he is majoring in environmental studies. His grandfather, who grew up during the Franco dictatorship in Spain, worries that his grandson’s new home will undergo the same fate as his country, noting parallels between the new administration and previous fascist regimes.

“He was asking me if I felt a change in people and society in general,” Lepoutre says. “And I told him, ‘Yeah, I really did. People are really angry.’”

His family isn’t the first to identify similarities between the rise of Donald Trump and the regimes of Hitler, Stalin and Franco, and they aren’t the only ones worried about relatives studying abroad in the United States. News of the travel ban, rising hate crimes and last week’s rescission of the Deferred Action for Childhood Arrivals (DACA) executive order have damaged the country’s reputation as an academic haven.

As the Trump administration calls for the deportation of nearly 800,000 DACA recipients who have studied and worked here most of their lives, it’s no surprise that international students—who only recently arrived in the U.S.—are questioning their own future in this country.

When Trump’s election victory was secured, Steven Lianto was nearing the end of his first semester at SJSU, where he studies electrical engineering. Like hundreds of international students in science, technology engineering and math, he left his home (in Indonesia) to complete a degree in Silicon Valley.

“The day that Trump got elected, my mother texted me like, ‘Hey, are you OK over there? What’s the situation over there? Will your visa get rejected or has any problem happened to you?’” he recalls.

Aside from the initial shock of November’s results, Lianto says, he doesn’t feel personally affected by the new administration. But other students, like Shati Dayatar, expressed deeper concern regarding rising anti-immigration sentiment in the U.S.

Amid reports of airport detainment and deportation, Dayatar has refrained from visiting his home in India for fear he won’t be allowed back into the U.S. “I feel really scared to go back home,” he says. “What if I go back and I’m not allowed to come back to my college?”

Susan Popko, associate provost for international programs at Santa Clara University, says that issues of travel, both within the U.S. and abroad, are a common concern among international students.

“We are trying to make sure we’re informing people accurately of what the impacts are,” Popko says. “Obviously, what was so difficult about the executive orders is that they didn't have any warning, they just happened.” 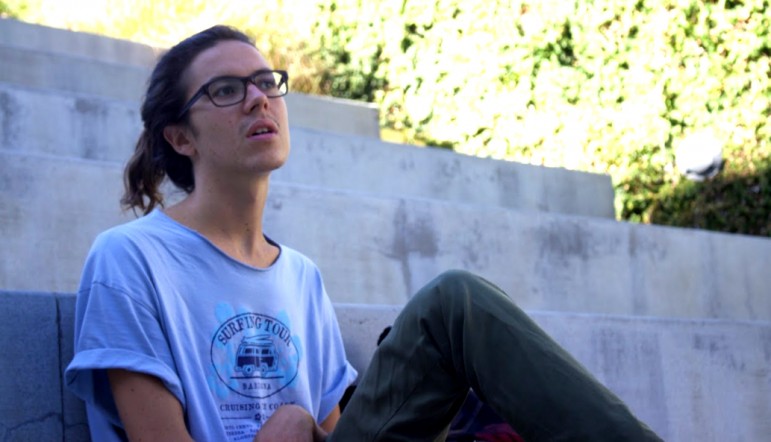 Between SCU, SJSU and Stanford University, the South Bay hosts more than 7,500 international students a year. Mirroring national statistics from the Institute of International Education, the majority of these students are in engineering, business, math and computer science fields. Most want to stay and work here after they graduate, but a crackdown on the temporary work visas has opened a rift in career options.

After getting accepted into college, international students are approved for a nonimmigrant visa called F1, which allows them to live in the U.S. as long as they are enrolled full time at an academic institution. Upon completing their academic program, students have 60 days to return to their home country. Those who want to stay in the U.S. can either transfer to a new school, work up to two years under Optional Practical Training (OPT) or apply for an H-1B visa.

After finishing his master’s degree in software engineering, Dayatar plans start a business back home where he can be close to his family, adding that the Indian government has been coming up with new regulations in support of tech startups.

Meanwhile, Trump’s administration has increased scrutiny on the H-1B visa program, which tech companies rely on to fill out their ranks. Computer programmers and software engineers make up the largest bracket of applicants in this hyper-competitive program, and critics fear Trump’s call for a more “extreme vetting” process would further perpetuate the nation’s tech talent shortage.

For international students like Andy Biersack, who dreams of working in Silicon Valley after graduating, the future remains unclear. Biersack moved here from Italy this summer and just started his first semester at SJSU as a software engineering major. After graduating, he hopes to score an internship and work at a local tech company. Maybe Facebook, he says.

It sounds about right—an aspiring engineer coming to the tech capital of the world—but many of his friends weren’t on board with his choice to study in the States.

“Most of my friends were like, ‘No, don’t do it. It’s not the right time, just wait,’” Biersack says.

But by the time the 2016 election results aired on his living room TV in Milan, Biersack had already been accepted to SJSU, his top choice, and he was on the brink of securing a student visa.

“If I quit all this and start back home, I’d have to start from scratch and I don’t want to do that,” he says. “So even though it’s crazy, even though I might not have a shot, I don’t really have a choice because I already completed 75 percent of it before this all happened.”

Despite Trump's promise to put American workers first, Biersack and other international students have faith that good grades and competitive resumes will ultimately land them a dream job.

“I really think it depends on our skill,” Lianto says. “If we are really needed here, then they actually really want us to work here.”

While students continue to put their faith in the tech industry, a recent report from U.S. Citizenship and Immigration Services proves that political tensions have taken a toll on the valley. For the first time since 2014, the number of H-1B applications fell below 200,000 this year. Employers submitted 199,000 applications for 2018, compared to 236,000 last year.

“That uncertainty, not knowing what their options might be, we feel that could impact enrollment down the road because if they don’t feel the opportunity here in the U.S., they might be looking elsewhere if that’s their goal,” says Rob Mieso, associate vice president of student services at De Anza College. Located in Cupertino, the community college has one of the highest transfer rates in California and hosts about 2,000 international students a year.

In addition to waning opportunities in the workforce, an uptick in hate crimes following Trump’s election has students questioning whether American universities are the safest option. In November, SJSU President Mary Papazian sent out a campus-wide email regarding multiple hate crimes, including one incident in which a Muslim woman was grabbed by her hijab and choked.

Three months later, two Indian nationals, both engineers, were shot in a bar in Kansas. Pat Harris, director of media relations at SJSU, says that while it’s not unusual for the school to send recruitment teams overseas, the issue of personal safety was even more pronounced when recruiters met with prospective students following the suspected hate crime.

“That was huge for us,” Popko says, referring to the killing of two Indian engineers in February. “At one level, international students bring in massive amounts of dollars. Universities depend on that and if we we’re going to have a dip of 50 percent, that would have a huge impact on the university.

Data compiled by the Association of International Educators (NAFSA) found that more than 1 million international students at U.S. colleges added $32.8 billion to the national economy during the 2015-2016 academic year. Even a slight decline in enrollment from nonresident students, who pay two to three times as much as residents, could heavily impact universities already facing budget cuts.

Growing enrollment and reduced state support have led to the first tuition increase in six years at California State University’s 23 campuses, with the University of California poised to follow suit.

Students who applied for this school year aspired to study at a U.S. college long before Trump’s election. Many of them, like Biersack, will continue on this path despite the recent turn of events.

“I won’t say I’m not scared,” Biersack says. “I am scared, but at the same time I can’t quit school and go back. Of course I’m gonna get my degree and give it a shot.”