This year has been bad—that almost doesn’t even need to be said anymore—but there have also been successes in San Jose’s urban core, which is primed to regain momentum in the new year, according to Scott Knies, head of the San Jose Downtown Association.

Knies, and others from SJDA, celebrated some of those successes and lamented the challenges Friday during its annual Year in Review meeting, normally held at the Hammer Theater, but this year hosted via Zoom for the first time.

“We all long to return to our cherished events and traditions, I promise to never take another art opening for granted, and oh my, how much I miss live music,” Knies said. “What I’ll carry most from this bewildering year is the strength of our small business community. Their endurance against all odds, getting whipsawed by protocols, finding a way, moving outdoors, even opening new businesses boldly and with flair and quality. And the best Christmas present of all: a Covid vaccine is coming soon.”

The challenges of 2020 and for the coming year are obvious: tight budgets for cities, organizations like SJDA and private companies; many businesses have shuttered for good during the pandemic; homelessness in downtown is on the rise and keeping the urban center clean has only gotten more challenging. 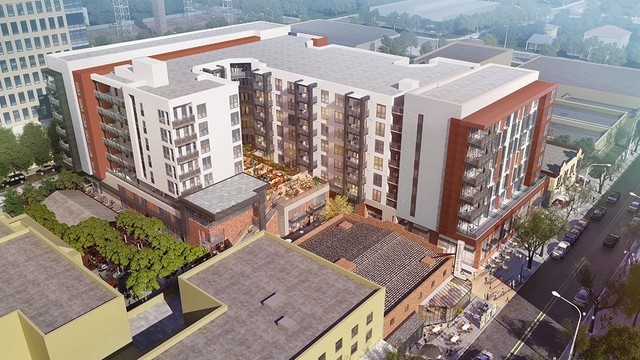 An Aerial view of the Modera residential development by Mill Creek Residential. (Image courtesy of SJDA)

The 2020 Golden Nail Award, an annual accolade that SJDA bestows to a person or project that has contributed “excellence and vibrancy to downtown’s built environment,” went to the Alley on San Pedro Square.

The S-shaped alley between San Pedro Street and Almaden Avenue is buffered by the new Modera Apartment building and its ground-floor retailers on one side. On the other side, San Jose mainstays, including Five Points and The Brit, have opened or expanded their patios to the new thoroughfare.

“The only thing missing is the people and that’s coming,” he said. “I know it is.”

Watch the SJDA Year in Review event in full below.