An evacuation warning was also issued for San Jose’s East Side. (For more information on teh difference between an order and a warning, click here.)

Throughout California, we are embarking on another despair: Wildfires. With more than 7 counties currently engulfed in...

The weekend’s extraordinary storms brought upward of 10,800 lightning strikes in Northern California that sparked 367 fires, many of which have morphed into raging infernos that continue burning through today.

Smoke from roaring fires amid a historic heat wave and parched air have coalesced into an apocalyptic haze blanketing Santa Clara Valley and beyond.

With so many fires burning throughout the upper half of the state, Cal Fire opted to naming clusters of blazes instead of christening each one. The resulting monikers: CZU in Santa Cruz and San Mateo counties, SCU in Santa Clara, Contra Costa and Alameda counties and the LNU lightning complex in Sonoma.

The CZU August Lightning Complex, a series of 22 fires burning at various locations near the counties’ shared border, started Sunday morning during an atypical lightning storm.

The fires are threatening 6,000 structures and are 0 percent contained, Cal Fire said.

“The unfortunate turn of events yesterday was the wind,” Cox said. “That’s why we’ve gone so quickly from a small-growing fire in the middle of the remote parts of the county to a fire front that has pushed southward fairly quickly.”

Cal Fire has identified five large fires, including the Waddell and Warenella fires. Combined, those two have ripped through 620 acres in the northern reaches of Santa Cruz County near Highway 1.

Smoke from the Waddell Fire drifts over Highway 1 along the Pacific Coast. (Photo by Dave Miller)

Cal Fire said residents of communities adjacent to Bonny Doon and San Lorenzo Valley should also be prepared to evacuate. Evacuation centers have been set up at Pescadero High School, located at 360 Butano Cutoff Road in Pescadero, and at the Santa Cruz County Fairgrounds, located at 2601 E. Lake Ave. in Watsonville.

Gov. Gavin Newsom late Tuesday declared a statewide emergency as several fires have arisen throughout the state, including a trio in Monterey County.

In Santa Clara County, the air is thick with smoke, prompting public health officials to urge physically vulnerable people to stay indoors as much as possible. 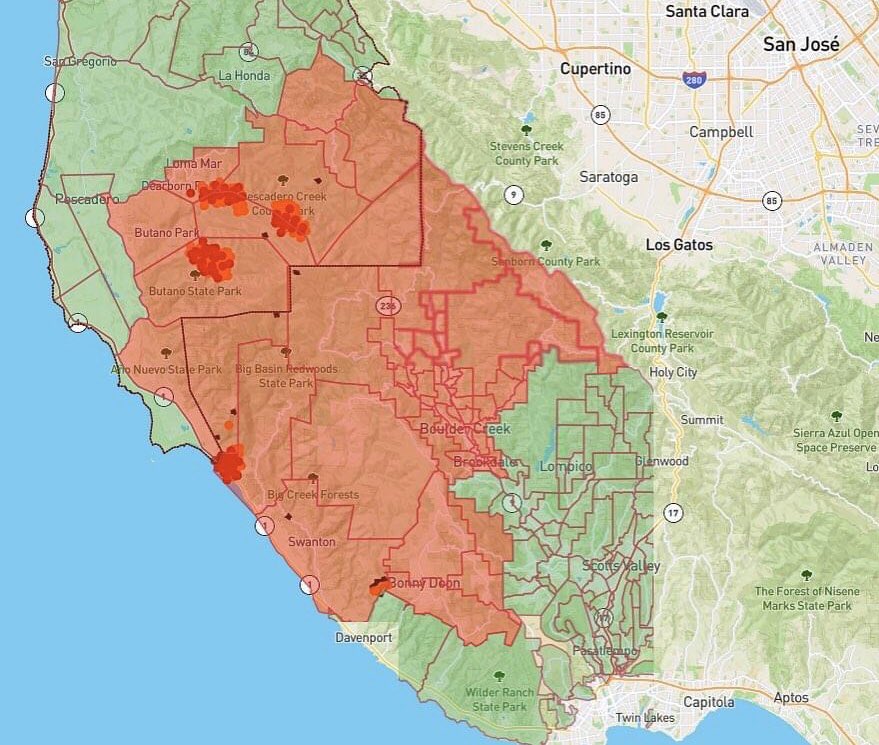 A map of the evacuation area. (Source: Cal Fire)