The gunman in the massacre at the Gilroy Garlic Festival took his own life during a shootout with police, the Santa Clara County Medical Examiner-Coroner revealed today.

Dr. Michelle Jorden, responding to a request from San Jose Inside this morning, ruled the death of Santino William Legan, 19, a suicide by “intra-oral gunshot wound of head.” That is, he shot himself in the mouth with a semi-automatic rifle.

The coroner gave no further details. 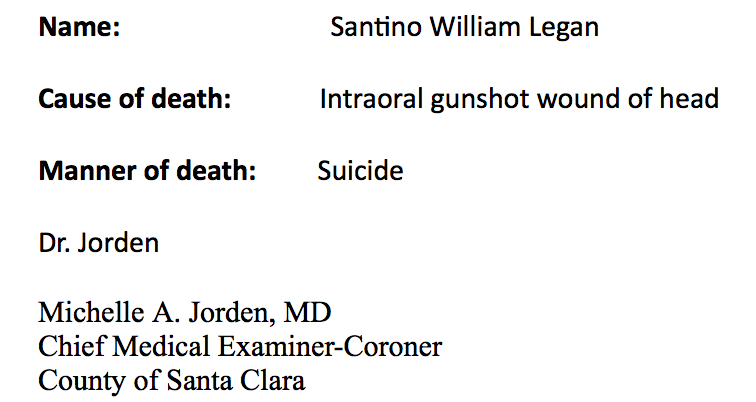 That runs counter to what the FBI and Gilroy police have repeatedly told media. Gilroy Police Chief Scot Smithee on Monday told media: “Officers were in that area and engaged the suspect in less than a minute. The suspect was shot and killed.” On Thursday, he named three officers whom he said killed Legan, taking him down within a minute of the rampage. He called the law enforcement veterans heroes for preventing more casualties.

Gilroy Police Chief Scot Smithee said he also learned of the coroner’s preliminary report Friday. At a hastily-called press conference at the Gilroy police headquarters, he offered more details about the July 28 shooting.

The chief said police on duty at Gilroy’s Christmas Hill Park fired at Legan, hitting him “multiple times.” During the shootout, the gunman fell to his knees and then to the ground. It was sometime during that sequence when the gunman fired a single round into his mouth, according to Smithee.

The chief said officers at the chaotic scene were unaware that Legan had shot himself, and that this new revelation from the coroner doesn’t diminish their heroism.

“In my mind, it changes nothing,” Smithee said at a press conference Friday. “The officers got there fast. They engaged him fast. They drew his fire and they eliminated the threat. Whether he fired that final shot or not, in my mind, changes nothing.

The July 28 shootout occurred at the north side of Gilroy’s Christmas Hill Park, 20 minutes before the close of the three-day Garlic Festival, and less than a minute after Legan had sprayed a crowded food court with dozens of shots, killing 6-year-old Stephen Romero, 13-year-old Keyla Salazar and 25-year-old Trevor Irby.

Police said 13 other people suffered gunshot injuries in the shooting at the festival, a signature event in this city of 60,000 for more than four decades.

Legan was a Gilroy High School graduate who had lived briefly in Nevada, where police said he purchased the murder weapon and ammunition earlier this month.

Police and FBI on Friday continued their investigation of the crime scene and of materials obtained from search warrants in Gilroy and Nevada. Four of the victims remained hospitalized at the Santa Clara Valley Medical Center Friday.