Peering through the diamond-crossed wire fence, Kirk Vartan describes his vision for the empty plot of dirt and asphalt across the street from Westfield Valley Fair mall. In just a few years, he says, those six acres could become a bustling urban village with low-income senior housing, a community farm, rooftop, aquaponic and vertical gardens, artisan shops, studios and an open-air market.

“This is the only open space, the only contiguous six acres the city of Santa Clara has left,” he says, clutching colorful renderings illustrating the site’s tentative future as a so-called “agrihood," a tract built around shared farms that’s cropped up in about a dozen cities throughout the nation. “We don’t want to see another boring proposal. We don’t want development for the sake of development.”

A decade after acquiring a slice of a former agricultural research site at 90 N. Winchester Boulevard from the state, the city of Santa Clara has revived plans to redevelop it. Based on the original terms of the sale, the city has to include at least 165 low-income senior homes and meet a strict deadline to break ground by early 2017. But Vartan, neighborhood groups and some city officials want to do more than rehash a stale development plan.

“Our city is seeing greater visibility,” says City Councilwoman Lisa Gillmor, who voted with her colleagues to put out a new request for proposals. “This could be a chance for us to showcase our creativity while preserving this land as a little snapshot of our agricultural past.”

Last month, eight developers submitted concepts for the empty lot bounded by Winchester Boulevard to one side and sentinel-straight rows of townhomes on the other. While the details of those proposals remain private, at least one draft circulated at a neighborhood meeting borrows from Vartan’s vision: edible gardens and orchards alongside affordable housing and public gathering spaces.

The Silicon Valley Business Journal filed a Freedom of Information Act request to get the names of those developers, which are listed here.

Vartan has been lobbying for this type of inter-generational urban-ag enclave in some form or another for the better part of a decade. Though his has largely been a losing battle against developers and the powers that be. 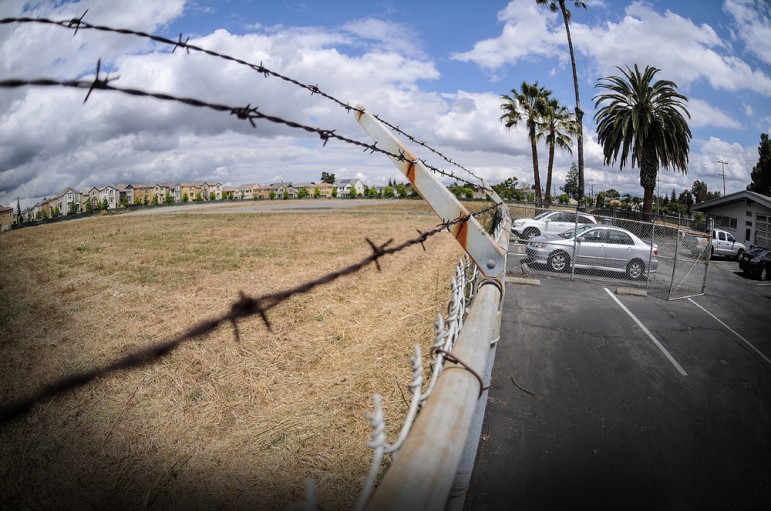 The site slated for redevelopment has been vacant for a dozen years. (Photo by Greg Ramar)

Remarkably, despite considerable setbacks, he remains hopeful. Proving his faith in the project, he put up more than $100,000 of his own money for architectural renderings of what he calls Win-6. His optimism belies a history fraught with political controversy, allegations of backroom dealings and retaliatory litigation that put Vartan personally in the crosshairs. Now with an end in sight, he’s willing to make amends, even with former political foes.

“The conditions have changed,” he says, “so my approach has changed. I think we can use this property that wedged the community apart to bring it back together.”

For 80 years, scientists and master gardeners studied agriculture at the 17-acre Bay Area Research and Extension Center (BAREC). They came up with ways to treat plant diseases, to make less-pungent compost and new varieties of turf. They hosted field trips and dispensed free gardening advice.

“When I was little, I lived down the street and would often go down there with bugs in jars to show the researchers,” Santa Clara City Councilwoman Teresa O’Neill recalls. “Lots of people would go there with a leaf from their garden to ask what’s going on with their plants. It was an incredible resource.”

But in 1999, the University of California, which owned the land, sold it back to the state in exchange for a $2 million annual funding increase. The sale took the community and even high-ranking political leaders by surprise. Then-state Sen. John Vasconcellos called the process leading up to the sale “truly abominable” for excluding public input. A year later, the site closed. It wasn’t long before the state reneged on its promise of a pay bump for the UC system. 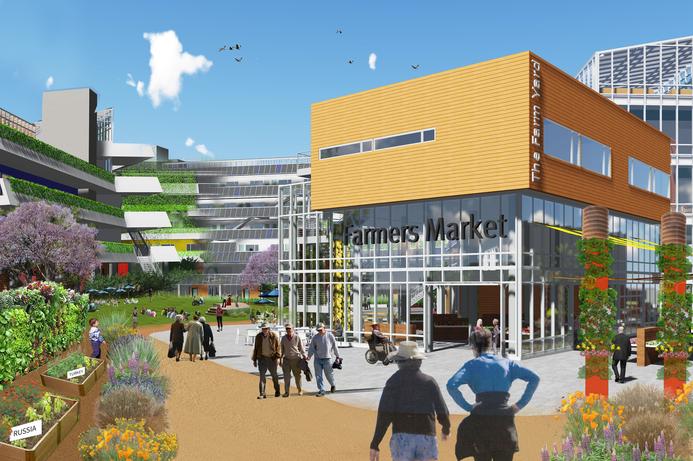 An early rendering of the Win-6 Village concept.

With the state in control and talks of another sale in 2002, a group of concerned citizens formed a group called Save BAREC to talk about how to revive the fallow farmland. They wanted to keep the property open and public, with at least part of it for agricultural education to honor the site’s history.

In 2005, the city spent $11.5 million on six acres with plans to build below-market-rate senior housing. SummerHill Homes bought the remaining 11 acres for $32 million, promising to set aside one acre as a public park. As head of Save BAREC, Vartan petitioned for a referendum to prevent construction of market-rate homes, but lost to a $1 million campaign bankrolled by developers.

Save BAREC then filed a lawsuit challenging the city’s environmental review, which delayed construction but ultimately lost in court. SummerHill sued Vartan and colleagues Kathryn Mathewson and Sharon McCray to recoup some of the legal costs, though a judge eventually tossed that case, too.

“It was exhausting,” Vartan says, reiterating that he’d rather talk about the future than the drawn-out legal wrangling of the recent past.

Homes went up in 2010, crowding out most of the open space. Plans by Charities Housing and Santa Clara Methodist Retirement Foundation to build the low-income senior homes were stalled by economic recession and the state’s dissolution of redevelopment agencies—a chief source of affordable housing funds. Finally, five years later, the housing market has come roaring back.

“There’s justification for this type of public investment now,” says Vartan outside A Slice of New York, a popular local pizza chain he founded after his engineering career at Cisco brought him from his native New York City to Silicon Valley. “I’ve been criticized for being too grandiose, but just look at the growth slated for this area.”

Valley Fair plans to spend $600 million on a new high-tech parking garage, theater and 150,000-square-foot Bloomingdale’s. Santana Row, across the street from the indoor mall, plans to build more office space and expand into the 11-plus-acre site of the former Century dome theaters.

“We’re about to see an unprecedented explosion in infrastructure and traffic as a region,” says Vartan, who has spent the past several months presenting his Win-6 concept to community groups and policymakers. “It makes sense to do something innovative here.”

Funding, he realizes, will be a challenge. In its call for ideas, the city encouraged creative proposals with limited public subsidy. For example, a developer could buy three acres for market-rate homes and use the resulting revenue to pay for low-income counterparts.

Recently, Vartan found an agrihood ally in native plant expert Alrie Middlebrook, founder of the California Native Garden Foundation (CNGF). At least one developer, according to plans submitted in response to the city’s call for proposals, has identified CNGF as a potential nonprofit partner for the community farm.

“We could actually create an urban village here with the capacity to produce 50 percent of the development’s food supply,” says Middlebrook, who converted a San Jose parking lot into Middlebrook Gardens, which she views as a working model for the former BAREC site. “That’s not far-fetched. If anything, that’s the future: to provide services to people close to where they live."