San Jose could dramatically raise the fines for violating its new cannabis club regulations. The City Council on Tuesday will consider an escalating schedule of fees ranging from $2,500 to $50,000.

Come Oct. 17, the grace period for pot clubs to comes to a close. City officials want to make sure the enforcement program is robust enough to get people to comply.

“The proposed changes would support more effective enforcement of regulations applicable to medical marijuana establishments by setting forth reasonable fines that encourage compliance with the code,” San Jose Police Chief Larry Esquivel writes in a memo proposing the new fees. 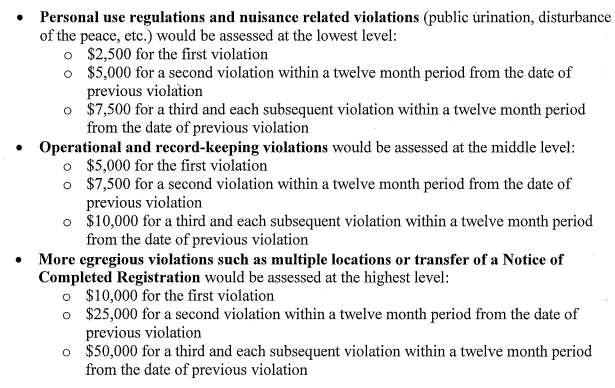 The council adopted new pot club regulations over the summer that restricted dispensaries to about 1 percent of the city. Cannabis clubs were given a three-month grace period to relocate or shut down. Attempts to overturn the new regulations fell flat when pot club advocates failed to collect enough signatures for a referendum.

Earlier this summer, San Jose counted 78 pot clubs within city limits. Only a handful are expected to survive once enforcement rolls out next month.