As departures continue to outpace new hires, a new audit directs the San Jose Police Department to invest more in marketing, expand its recruiting unit and change some requirements to broaden the pool of applicants.

In the past few years, as the city and its public safety unions sparred over pension reform, San Jose has seen a steady rise in vacancies, now at a historic high of 21 percent. The actual number of vacant police officer positions—out of a total of 871—grew from 40 in 2012 to 181 this summer. 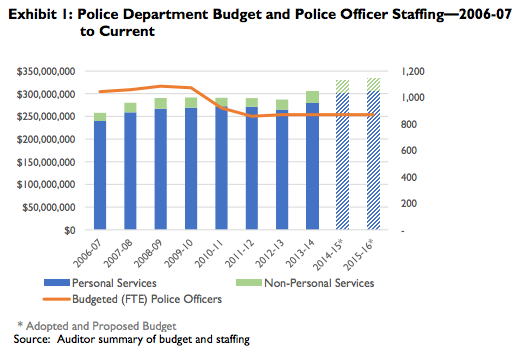 “This more than quadruples the number of police officer positions for which the department must recruit,” according to a report by city auditor Sharon Erickson, which comes up for review at Tuesday’s City Council meeting.

This year, the city plans to graduate three academies, which it has struggled to fill even after a deal that restored pay and dialed back some controversial pension cuts.

The target number for each class is 48 recruits, but each round brings a new record low. Only 13 cadets signed on to the academy this month, while even fewer are expected to make it to graduation.

According to Erickson, San Jose is not alone in its struggle to fill the ranks.

While increased demand and federal funding expanded police agencies in the late 1990s, the trend reversed in the decade to follow. Erickson cited a recent ABC News report that found a 90 percent drop in the number of applicants in some cities.

“While public safety departments face some of the same problems other employers do with U.S. unemployment at a 30-year low, police recruiters are additionally stymied by the job’s low pay, tarnished image, increasingly tougher standards for new recruits and limited job flexibility.”

Erickson said the SJPD should expand its recruiting unit, spend more on advertising and come up with a way to analyze which recruitment events have the highest yield of qualified candidates.

The audit also found that the SJPD didn’t make the most of its marketing budget. A $270,000 contract with an outside communications firm was only half used by the end of this past fiscal year. Because of a lack of communication, several tasks were left unfinished, advertising lapsed for a few months and a recruiting website that should have been finished was never built.

The agency could also tweak its requirements to accommodate more military veterans, the report said. Waiving college credits for relevant military experience could open the doors to more applicants.

One of the biggest hurdles for San Jose, however, is that net compensation doesn’t stack up to that of other Bay Area law enforcement agencies. Many officers leaving San Jose have taken jobs at nearby agencies.

“San Jose Police Department staff expressed concern that San Jose’s reputation as a top-choice employers has declined due to a variety of reasons, including take-home pay,” Erickson reported. “Internally, department staff members report that they face low morale. This can affect potential future candidates and retention of recruits. … In our opinion, the City needs to actively address morale and pay issues within the police department.”

More from the San Jose City Council agenda for October 6, 2015: