Days before the 2020 Census was set to come to an early close, a U.S. District Judge in California issued a preliminary injunction that extends the deadline by a month.

The ruling, issued Tuesday by Judge Lucy Koh in the Northern District of California, says the U.S. Census Bureau should keep tallying residents across the country until Oct. 31.

President Donald Trump’s administration had issued a Sept. 30 limit for collecting information and a Dec. 31 deadline to finish counting census data, but that shortened time frame was likely to turn up inaccurate information, Koh said in her ruling.

“Today, against powerful forces of exclusion and elitism, the court has vindicated a fundamental American principle: everyone counts,” Liccardo said in a statement. “We are proud to join forces with our partners to hold the Trump Administration accountable to our nation’s constitutional commitments.”

Proud to have taken part in this successful effort to force ⁦@realDonaldTrump⁩ ⁦administration to ensure a full & fair census count. In ⁦@CityofSanJose⁩ and under our #Constitution, everyone counts. #Census2020 https://t.co/Hvi9SRRfgM

The census, which aims to count every person living in the United States, is used to allocate more than 1.5 trillion annually of federal funding across the country. Those allocations start, however, by getting a count on residents once a decade. Each person counted can bring about $20,000 to the state annually, before the next count, adding up to millions of dollars at stake per person counted—or not counted.

Some of the most challenging people to count are people of color and homeless residents, census leaders say. This year, the coronavirus pandemic has ramped up the roadblocks to counting those populations, particularly for the team of door-to-door census workers tasked with trying to get stragglers to fill out the federal form.

Jonathan Nez, president of Navajo Nation, a more than 17 million acre Indian territory, said he hopes the ruling will be “respected,” so Census counting can continue.

“We have a strong and diverse coalition of plaintiffs who are demanding that the U.S. Census Bureau uphold their original plan to allow the census count to continue through the month of October,” he said in a prepared statement. “The coronavirus pandemic has set all of us back and created many challenges to get people counted, especially for rural areas such as the Navajo Nation.” 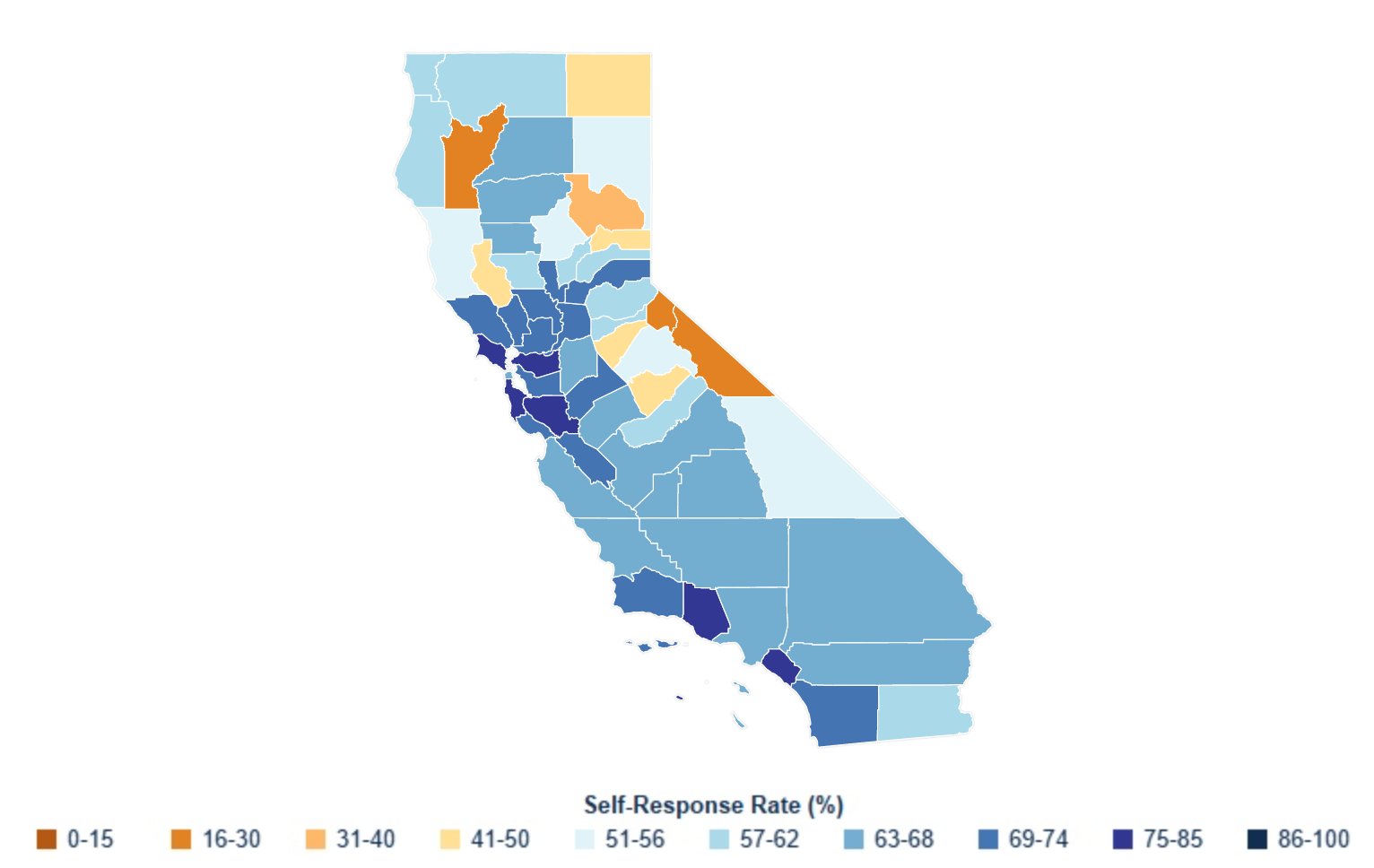 A snapshot of how the state is doing with collecting data. (Image courtesy of US Census Bureau)

Before the ruling this week, Koh had already issued a temporary restraining order that prevented the Trump Administration from implementing their plan to shorten the Census tally timeline. The order this week ads clarity to her decision.

Santa Clara County is doing a little better than the state as a whole in getting residents to self-respond to the census, according to the federal agency in charge of the county. So far, nearly 77 percent of residents have responded to the census in the county, compared to nearly 69 percent across the state. 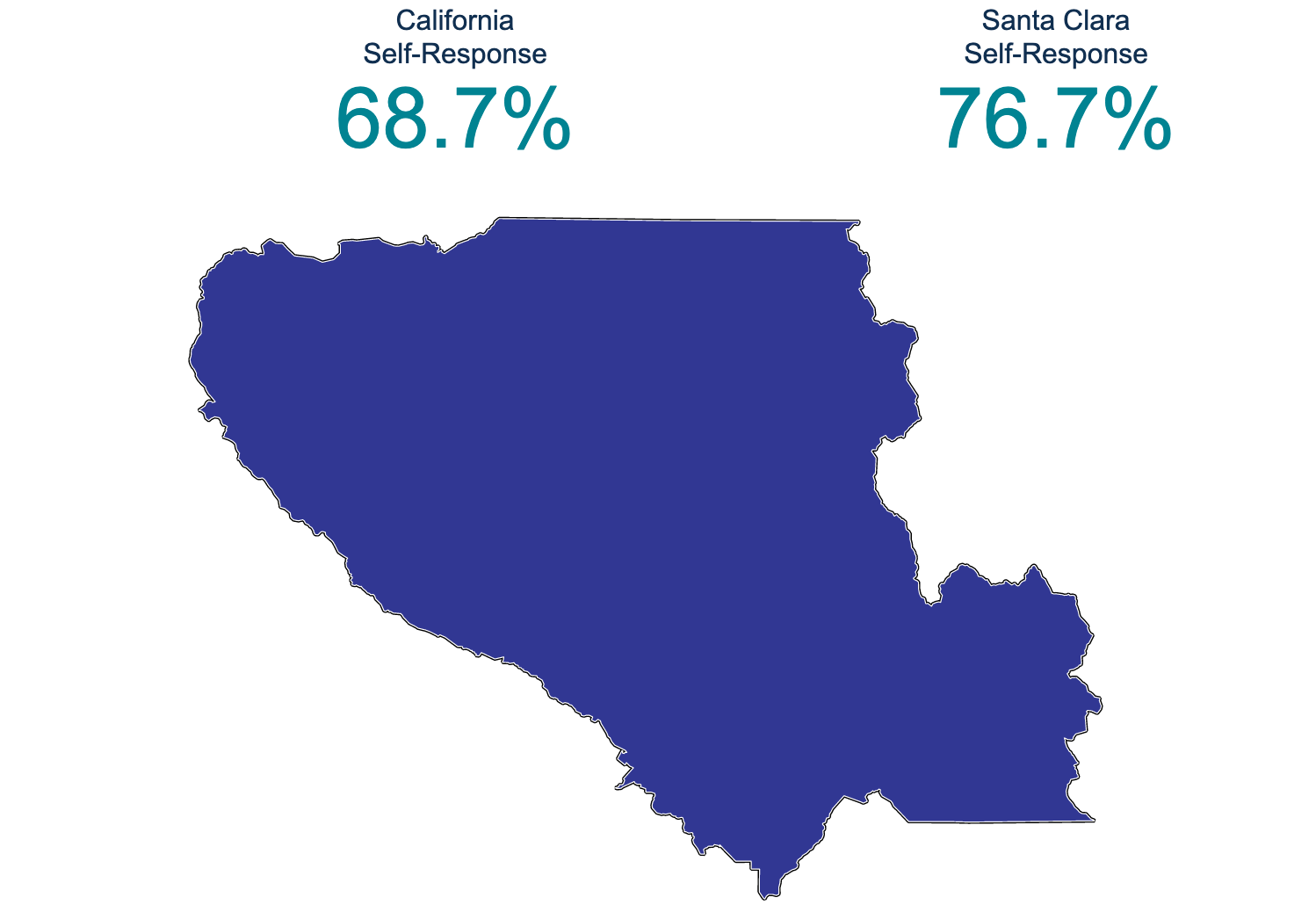 A snapshot of how Santa Clara County is doing with collecting data. (Image courtesy of US Census Bureau)

Nationally, the Census Bureau estimates that 66 percent of people have been counted.

“In the face of a global pandemic, the last thing we should consider is cutting short the decennial census that has long-lasting repercussions on the well-being, health, and livelihood of so many Americans,” Derrick Johnson, president and CEO of the NAACP. “The decision to continue the census will ensure proper attention is given to overlooked and unreported areas that need to be counted the most."