He braced for fires to come from three directions, just not all three at once.

When the flames came hurtling south towards John Chamorro’s 24-acre homestead on a 1,000-foot peak east of Mt. Hamilton, they hit faster and fiercer than he ever imagined.

The “wall of fire” looked hundreds of yards wide, he says, “more like a tidal wave of orange paint.” It blew past a 60-foot break with no signs of flagging.

Chamorro and his wife say they kept a close eye on the blaze for two days, from the moment a lightning bolt sparked it before sunup on Aug. 17. They immediately called Cal Fire, which he says acknowledged the incident and assured a speedy response.

“There was no suppression effort that I could see,” Chamorro recalls.

Smoke from the blaze “got bigger and bigger and bigger,” he says, before dying down a bit the next day. “Then, it blew up huge,” he recounts, and “ran back and forth in several directions—it ran everywhere.”

Alarmed by the disaster unfolding in the distance, the 68-year-old retired heavy equipment operator and his son, son-in-law and a couple of neighbors—“my crew,” he calls them—prepared fuel breaks on the north, east and south of the property.

“We laid out our plan to fire when necessary and had our points laid out well in advance,” Chamorro would later write in a dispatch to family and friends. “Everyone knew what and when to do it. Think poetry in motion mixed with a little chaos.”

Then came the fire.

At about 2am on Aug. 19, the flames began heading his way, dipping in and out of sight, from hilltop to ravine, until they crested about a quarter-mile away. “We decided, basically, that if we saw that fire on that ridge, then we’d jump,” he says.

Chamorro hopped on his bulldozer and launched “an aggressive attack” with his small crew, lighting backfires to the north and east of the house.

From behind his workshop, he torched a double break to lick up kindling before the wildfire could. Undeterred, the rogue blaze that came barreling through the rugged terrain “turned a bit,” he says, “and hit us from the south simultaneously.”

His house survived. The land around it resembles a hellscape, littered by smoking debris and the singed carcasses of rabbits, rodents and wingless birds. “Everything that was green is black,” he says. “The fire burned so hot here, it didn’t even leave the little sticks. It burned down to the ground so that there’s nothing but white ash.”

Many of the 200-or-so people who live in Santa Clara County’s remote backcountry defied evacuation orders to save what they could. Like Chamorro, they’ve weathered big blazes before. But he says he’s never seen a fire that danced so wildly or came so close.

“It was unpredictable,” he says. “There was so much wind, it was blowing spot fires everywhere and it just kept changing directions—a boomerang fire.” 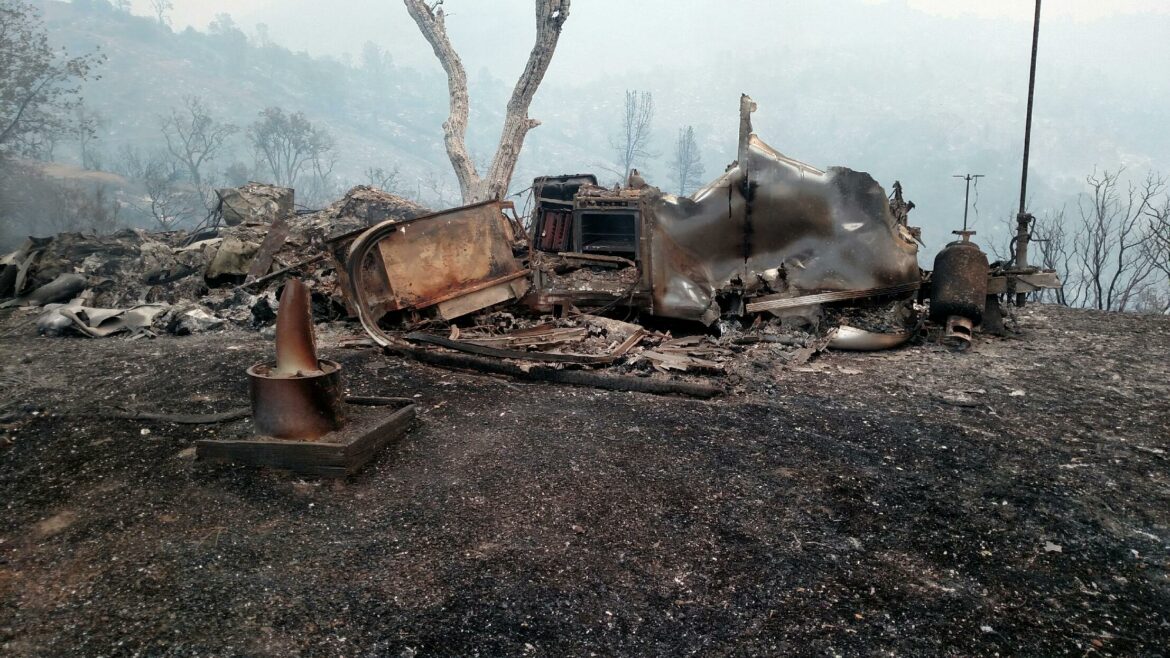 The day after. (Photo by John Chamorro)

Lightning-sparked fires spawned a week-and-a-half ago by freakish storms and expanding each passing day have already consumed 1.4 million acres in California.

The SCU Complex—the one that miraculously spared Chamorro—surpassed 365,000 acres on Tuesday, making it the second-largest fire in California’s recorded history and the largest still burning. With the LNU Complex in the North Bay’s wine country and the CZU Complex licking up bone-dry forests from the Santa Cruz Mountains to the Peninsula, it’s one of three major collections of fires laying the region under siege.

Though less catastrophic than the 2018 Camp Fire that flattened an entire town and left 85 dead, the sheer scope of the lightning fires that struck amid a pandemic, rolling blackouts and a record heatwave is staggering.

Some of the biggest fires in past years traced back to downed power lines, which steered righteous anger and legal recourse against the state’s power monopoly, Pacific Gas & Electric. This time, there’s no monied villain to sue for damages.

The lightning spawned during a rare August storm exposed the vulnerabilities of living in California, where protracted drought has turned grass, trees and shrubs into kindling and population centers lie close to flammable wildlands.

“This is an absolute marathon that we are embarking on,” he told reporters Sunday at one of the twice-daily briefings Cal Fire has held since the lightning fires started. “We have recognized that we are going to need to be here in the long term.” 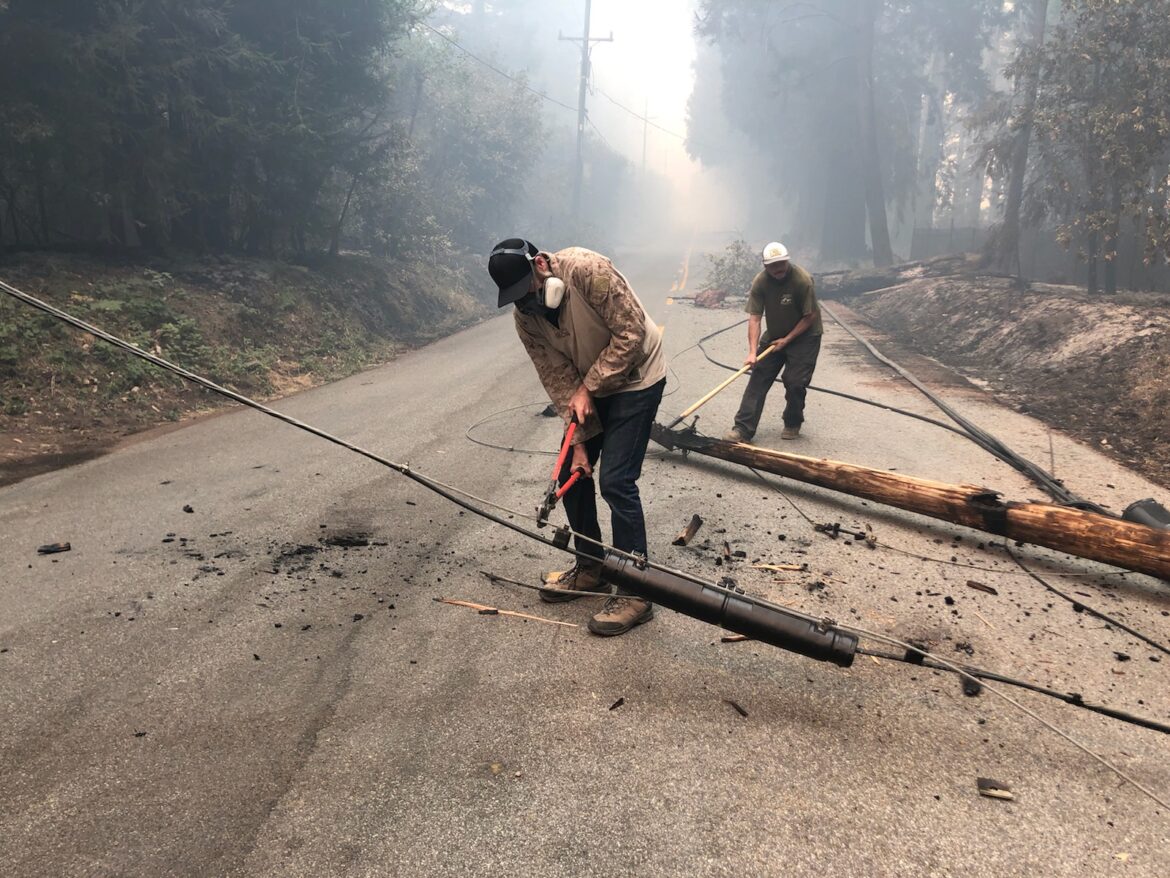 A pair of Bonny Doon residents who stayed behind to fight the CZU fires. (Photo by Matthew Hahn)

Santa Clara County Supervisor Dave Cortese, who lives just a block or so away from an evacuation zone in San Jose’s eastern foothills, says his office has been fielding hundreds of messages a day from worried constituents.

“My district has been going through a tremendous amount of anxiety,” he says. “There’s not as much structural damage here compared to what we’re seeing in some places, but that could change if the winds bring the fire to this side of Mt. Hamilton.”

It came close to crossing over last week when the fires closed in around the Lick Observatory. Thankfully, firefighters managed to hold the line until westerly winds pushed the flames south and east away from San Jose.

Cortese says he’s still uneasy about the flames finding their way to the city side of the mountain through the dry brushy growth of Alum Rock Park.

“If the fire reaches that far, it could easily end up reaching all those homes above the park entrance, above the San Jose Country Club,” he says. “We could easily have another Oakland fire up here, which is why everyone’s been on pins and needles even now.”

Even his normally rambunctious 3-year-old Labrador, Travis, seems affected, having been uncharacteristically pensive and glued to his side, Cortese says. “He seems to sense that something’s up,” he observes. “It’s actually quite touching.”

As a hillside resident so close to the state's biggest fire, the county supervisor says he’s grappling with the same sense of unease. Like many of his neighbors, he says he and his wife packed some essentials in case they’re forced to leave. They taped a checklist on the fridge. And he’s been keeping in close contact with County Executive Jeff Smith and Santa Clara County Fire Department Chief Tony Bowden.

“This has definitely been an interesting lived experience,” Cortese remarks. “Having studied some of these other fires—Paradise, the Camp Fire—as a member of regional government, I’ve learned a lot without having to deal with it firsthand. At the county, we sent out mutual aid, we helped when the fires were impacting other areas. But until you’re in an evacuation zone yourself, it’s just hard to explain how it feels.”

Billowing smoke from one of the SCU lightning fires. (Photo by John Chamorro)

Never has Cal Fire fought so many battles on so many fronts.

Even with out-of-state backup and help from Australia and Canada on the way, Cal Fire said the 14,000 firefighters deployed to quell the lightning fires aren’t remotely enough. Officials say they’d normally have 10 times as many crews fighting fires like the SCU and CZU complexes flanking the South Bay.

“We definitely are stretched thin—more so than I’ve ever seen,” says Cal Fire spokesman Joe Amador, a San Diego fire captain assigned to work the media hotline for the SCU Complex. “Normally, for a fire this size, we’d have 40 to 50 PIOs on it. This time, I can tell you, we have about a dozen.”

The fires have also laid bare the state’s heavy reliance on prison labor. To prevent Covid-19 outbreaks behind bars, the California Department of Corrections this summer released thousands of inmates, including those assigned to fight fires.

Cal Fire had 2,800 inmate firefighters to activate in 2019 compared to just 1,300 this year. Inmates deployed to California’s fiery frontlines make $1 an hour to do some of the toughest work, staffing “hand crews” that use shovels and chainsaws to cut firelines in places inaccessible to bulldozers, or if machines aren’t available.

With Cal Fire strapped for resources, it’s no wonder Chamorro and so many others shirked evacuation mandates and warnings from law enforcement to put up a fight. 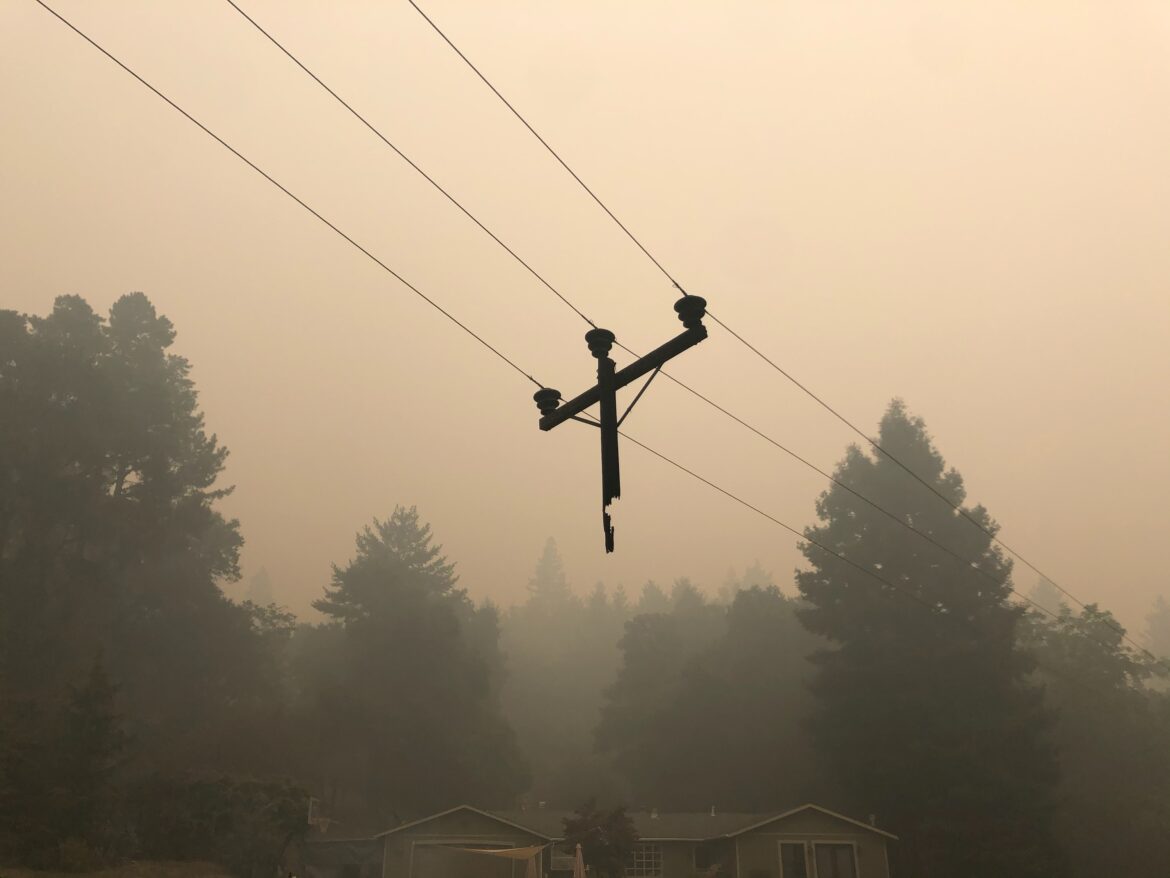 Smoke shrouded the region in a hazy pall for most of the past week. (Photo by Matthew Hahn)

When Matthew Hahn, 40, stepped outside his San Jose home on Aug. 19 to see ash falling from an orange, hazy sky, he decided to pack a camera before heading to work. “I’m a hobbyist photographer,” he says in a phone call earlier this week, “and I figured I’d get some good shots on a day like this.”

Scouting for good angles brought him to the edge of the CZU as the fires marched north through San Mateo County. While snapping photos by Pescadero Creek, Hahn says the sound of a chainsaw stirred “a visceral memory” of his years as an inmate firefighter.

The next day at work, he says a friend called with terrible news that moved him to action. “She told me her house burned down in Bonny Doon,” Hahn says. “She was beside herself, saying if only we had gotten there an hour earlier, it could have been saved—because it wasn’t like a fast flame, it sort of creeped up on her house.”

Figuring his hand crew experience could save other homes from the same fate, Hahn put out a call on Twitter for other ex-inmate firefighters. After leaving work early, he stopped by Home Depot to buy a chainsaw, shovels, axes, oil, rakes, gloves, goggles and other tools for anyone who showed up to help.

Then, he headed to Bonny Doon, expecting to lend a hand by clearing brush or dousing stray embers. Instead, he stumbled upon a cohort of impressively prepared volunteers playing more than just defense. With Cal Fire pulled to other fronts, scores of residents equipped with water trucks, fire hoses and bulldozers stayed to protect their tiny town.

“When I got there, I realized that this is a different beast altogether,” he says. “They knew what they were doing. They were ready to not only defend their homes, but to fight spot fires. They basically created their own community fire brigade.”

Over the course of two days, Hahn and helped the guerrilla firefighters extinguish blazes, secure structures and cut lines to protect the town. Their efforts saved a lavender farm from a fire that came roaring up a hill with what he says must’ve been 45-foot flames.

“The fire breaks we created managed to stop it,” Hahn recounts.

With wildfire seasons coming sooner and more intensely every year and Cal Fire overwhelmed as it is, Hahn thinks the state would be wise to support volunteer crews as organized as the ones he encountered in Bonny Doon. What’s more, he says, California could hire from the sizable pool of ex-inmate firefighters who trained on the taxpayer’s dime for exactly the work Cal Fire needs help with right now.

“You have probably thousands of these trained personnel throughout the state who can’t get hired because of their criminal record,” Hahn says. “The world isn’t getting cooler and California isn’t getting wetter. Why don’t we tap this resource when disaster hits?”