In the annals of California history, no one has ever had to put a broken state park back together. There’s no guidebook, no rules. So now state officials and conservationists are attempting a complex and extraordinary Humpty Dumpty project: The reawakening of Big Basin Redwoods State Park.

The state’s oldest park, Big Basin was nearly erased in last summer’s lightning-caused wildfires. In one day, 97% of it burned, destroying buildings that had been standing for 120 years.

The fire destroyed roads, bridges, campsites, trails, the visitor center, restrooms, electrical and water systems—everything that makes a park accessible to the public. Forests of giant redwoods were charred by flames that soared more than 100 feet high. Trees that didn’t fall in the fire were knocked down by howling winds in January, delivering the fatal coup de grace.

In all, it was the most comprehensive destruction ever of a major park in California history. Portions of other parks have burned, cracked by earthquakes or submerged by flooding, but not like this.

Today, the park remains closed, its trails gone. Thousands of dead, blackened trees, tens of thousands of acres of charred shrubs and scores of unearthed boulders still litter the ground.

But a rare tour on Thursday proved that regrowth is already apparent. Towering redwoods, stripped of limbs, still manage to crowd out the sky. Some have the look of chimneys, hollowed out by fire. Most are, eight months after the lightning fires, both green and black. Scorched, alligatored bark rises hundreds of feet, but vivid green shoots sprout at their base like fuzzy house slippers.

“These are resilient, long-lived trees,” said Chris Spohrer, the district superintendent overseeing the state parks in the Santa Cruz Mountains. “It takes a lot to kill them.”

State park officials now have a message to get across: The park, 20 miles northwest of Santa Cruz, needs help, mostly money, but also public support and patience.

The state’s early estimate of $200 million for basic wildfire repair across the Parks and Recreation Department will be gobbled up to satisfy Big Basin’s needs alone, estimated at $186 million. But that’s just the beginning.

The tedious work of hauling equipment and materials down a steep ravine to rebuild a trail and a viewing platform at Berry Creek Falls will cost at least half a million dollars, Spohrer said. And the state’s bill for debris and hazard tree removal in the region is now about $270 million, according to the California Office of Emergency Services.

The repair list is unimaginably long. Here’s a partial catalogue: six vehicle bridges and 46 pedestrian bridges, 85 miles of trail, 53 miles of road, 100 structures, including the park headquarters, a museum, a lodge, 20 ranger homes, hundreds of signs and miles of fences.

It’s going to take a long, long time for the park to be rebuilt, and for the forests to heal. Patience is required. But nature will prevail. Forests are resilient. The thousand-year-old redwoods have seen this before. They are already coming back.

“We don’t know what it will look like,” Spohrer said. “But we do know the park is not going to look the same for a long time. It will not look the same in our lifetimes.” 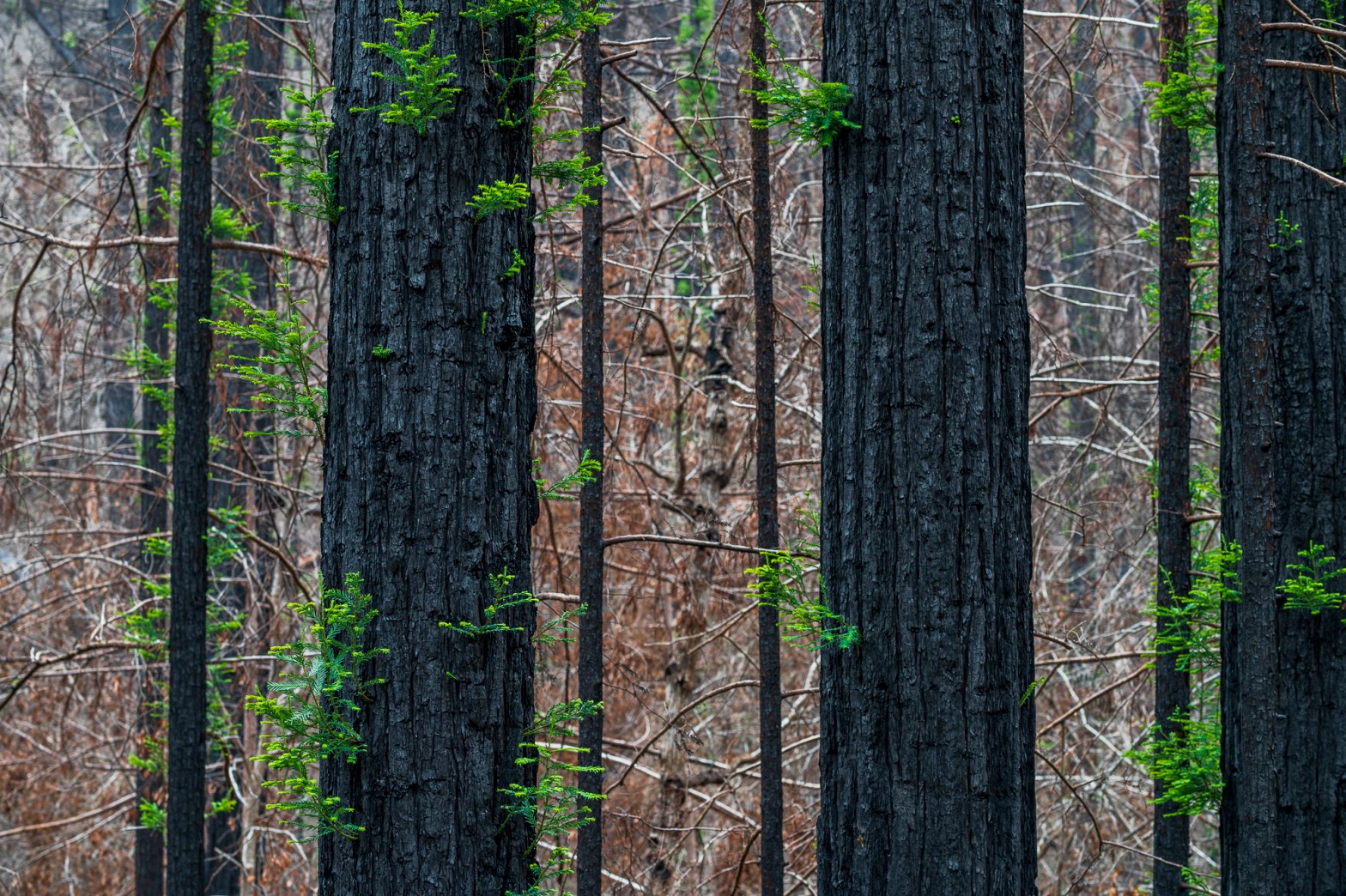 Spohrer stood in a parking lot off highway 236 on Thursday in the only 15 acres of the park’s front country that did not burn. Spohrer, blond and lanky, is the district superintendent overseeing state parks in the Santa Cruz Mountains.

He’s delivering, not for the first time, a carefully considered message. As awful as the fire was, its aftermath presents a unique opportunity for a wholesale reimagining of Big Basin Redwoods. Decisions will be made about where and if to rebuild structures. Rather than constructing charming wooden buildings, perhaps they’ll use fire-resistant materials and put them in places that aren’t as likely to burn. Maybe they won’t build facilities on the root structures of ancient trees.

The planning process will begin this summer and is expected to include public meetings, consultation with partner agencies and friends groups as well as local tribes, whose history is not deeply explored in the park.

There is no reopening date yet, it’s far off and subject to the progress of restoration efforts. But the Rancho del Oso area should be open for day activities by Memorial Day, Spohrer said.

He leads a convoy of four-wheel drive vehicles that bump along a narrow ridgetop road, affording a view of the darkly monochromatic landscape. The stands of knobcone pines here are reduced to smudges of ash on the chalky slopes, revealing pale Santa Cruz mudstone.

Most of the redwoods survived. The fire’s intensity triggered a survival response in the knobcone pines still standing: The cones are fused tight by a seal of resin. Temperatures of 350 degrees or higher melt the resin and release seeds, which can continue to rain down for years after a fire.

Other plants have spent their lifetimes adding to the soil’s seed banks, which are stored underground and called upon during times like this.

The landscape will continue to change, its balance upended: Delicate ferns that had spread in shady ravines under a now-gone dense tree canopy are likely to wither in the summer’s sun and heat.

The status of the park’s animals, such as deer, owls and racoons, is unknown. Those that could fly or run did so, and will return if they have homes to come back to. A system of trail cameras will help researchers track who’s around, Kerbavaz said.

“With the amount of biomass that’s been removed in the areas that are severely burned, there isn’t the same type of cover or food sources,” she said. “Species that could take advantage have moved in, like pileated woodpeckers. One of our important species, marbled murrelet, is a seabird that nests in old growth. We are concerned how the fire affected nesting habitat.”

None of the restoration work in the park is straightforward or in an easily accessible place. The park’s most popular site, Berry Creek Falls,  is one example of the complications.

The long descending trail that traces the creek is barely visible and crisscrossed with the husks of tree trunks. The trail’s artfully crafted wooden steps and hand railings are burned, the concrete bridges are lost and the once-burbling creek is clogged with trees and ever-falling rock.  The viewing platform, the site of visitors’ must-have selfies shot facing the cascading waterfall, is gone.

In January the state sent the Federal Emergency Management Agency its preliminary assessment of the repairs. If accepted, the state parks will be reimbursed for as much as 75% of the costs. 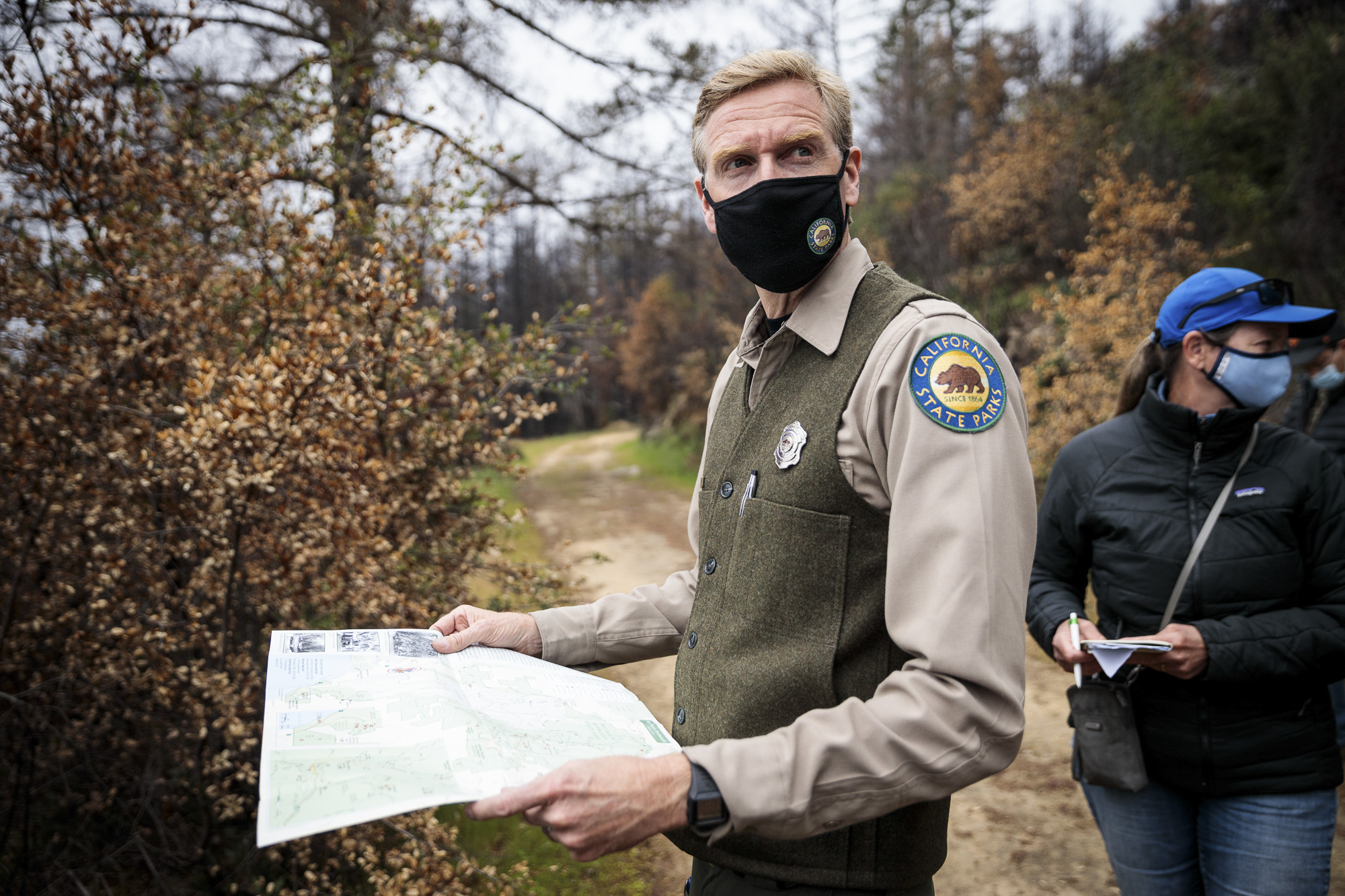 Spohrer said he is “in triage” mode and has prioritized repairing the roads—which includes rebuilding culverts—placing the water infrastructure and ensuring public safety. Much of that work involves removing the “standing dead,” trees that may suddenly crash down three or five years from now, with the impact of a falling building.

“That’s what I worry about,” Spohrer said.

There’s plenty more to worry about. The fire is not out. It is still quietly smoldering in the root systems of some trees. Two weeks ago fire flared again.

One change Spohrer hopes to institute is more prescribed burns to lessen the forest’s fuel load. Big Basin has been clearing brush and trees with fire since the 1970s, but the complexities and legalities that often snarl burn plans means that there have been only four prescribed fires in the last 10 years, he said.

Despite its challenges, the park—which draws more than a million visitors a year—has a dedicated constituency. Both the Sempervirens Fund and the Save the Redwoods League raised nearly $750,000 in emergency funding and stand ready to continue that assistance.

One possible funding source, said Sara Barth, executive director of the Sempervirens Fund, is the Biden administration’s $2 trillion infrastructure plan. With the Vice President and Speaker of the House Californians, the time is right.

“I don’t see how this can’t happen,” Barth said. Her organization and others are lobbying in both capitals to free up funding to rebuild Big Basin.

“It’s going to be excruciating to have to wait while the forest recovers and parts of the park are open,” she said. “It’s really about whether humans can get their act together.

“My hope is whatever emerges better be worth it. I am hopeful for the future but it does take a long view. The trees will deliver, let’s be clear.”