The series of atmospheric rivers that flowed over the Bay Area and the state in recent weeks produced record rainfall totals for a 22-day period for many locations in the state, according to a graphic map released early Thursday by the National Weather Service.

The highest totals provided by the service were recorded in tiny Honeydew in Humboldt County, which received 47.74 inches of rain. 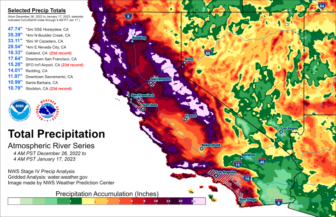