Mid-morning on Oct. 8, a police officer stopped Ricardo Alejandro Monzon for talking on his mobile phone while driving along Tully Road on San Jose’s East Side. It would have been a routine traffic stop settled with a few-hundred dollar ticket, but the driver’s prior offenses—missed court dates, unpaid fines and a DUI conviction four years prior—resulted in a misdemeanor charge of driving on a suspended license.

Monzon, who announced his marriage to county education trustee and state Assembly candidate Darcie Green weeks later, has been ordered back to court Feb. 8 for an arraignment. If convicted, he could end up in jail or sentenced to weekend work while his wife campaigns for the 27th Assembly District seat.

Last week, San Jose Inside uncovered disturbing details about Monzon’s multiple domestic violence convictions and extensive history of battering women, despite recent efforts by him and his wife to portray him as a feminist. The 35-year-old personal trainer has spoken at political forums and sought public attention, projecting a persona that omits mention of his violent past.

On Dec. 11, Green shared a picture of Monzon online to announce that he would take her surname. “I married a tough, strong and proud Latino man from the East Side of San Jose,” she wrote in a Facebook post peppered the hashtags “#WhatGenderRoles,” “#FeministFriday” and “#ThisIsWhatAFeministLooksLike.” “Some might say a man's man. Today my husband changed HIS last name to Green."

In the past week, however, San Jose Inside has reviewed newly available court records with more troubling details about Monzon’s past. By the latest count, he has eight criminal cases to his name, one of which has been expunged. Three are for minor offenses and the rest involve violence against women. At least three of his former partners have filed restraining orders against him, some multiple times and one as recently as 2013. Two women claim to have married him, though Monzon calls Green his second wife.

A petition for a restraining order from Monzon's ex-girlfriend, a police detective, in 2013. (Source: Santa Clara County Superior Court)

Of his five children by three women, Monzon has partial custody of two. Another son, who’s 11, has never met his father because the mother's family wants nothing to do with him. His first two children, who grew up without him or his financial support, wanted to reconnect last year but, according to their mother, were removed from his custody in September by social workers.

Since San Jose Inside’s report, Green has gone on the offensive, calling reports about her husband’s battering of women a “sexist” attack on her public policy work. She acknowledged Monzon’s misconduct but, despite an open criminal case and an ex-girlfriend’s active restraining order, she called it a thing of the past.

In a case file made available last Friday, an account of the early morning of Jan. 14, 2006, states that a woman who identified herself as Monzon’s wife and mother of two of his daughters woke to the sound of her cellphone vibrating. She walked out of the bedroom of her mother’s house, where she was staying to get away from her husband, and saw Monzon sticking his head through a bashed-in hole in the front door.

“You better open this door right now!” Monzon yelled at her, according to the woman. “Either you are gonna die or I’m gonna die!”

The woman told him that she couldn’t find the key, and then ran into the bedroom where her daughter was asleep on the bed. Monzon punched through a glass window of an adjacent bedroom, police said. The baby girl began bawling. The woman’s mother arrived just as Monzon approached the front of the home again.

“Get the fuck out of here!” she reportedly yelled at him.

“I’m sorry,” Monzon replied, according to police. “You know how I am when I’m drunk!”

Monzon was arrested for violating a restraining order, which required him to stay at least 300 feet away from the woman. By then, he had racked up several protective orders and domestic violence convictions dating back to his first marriage in high school. 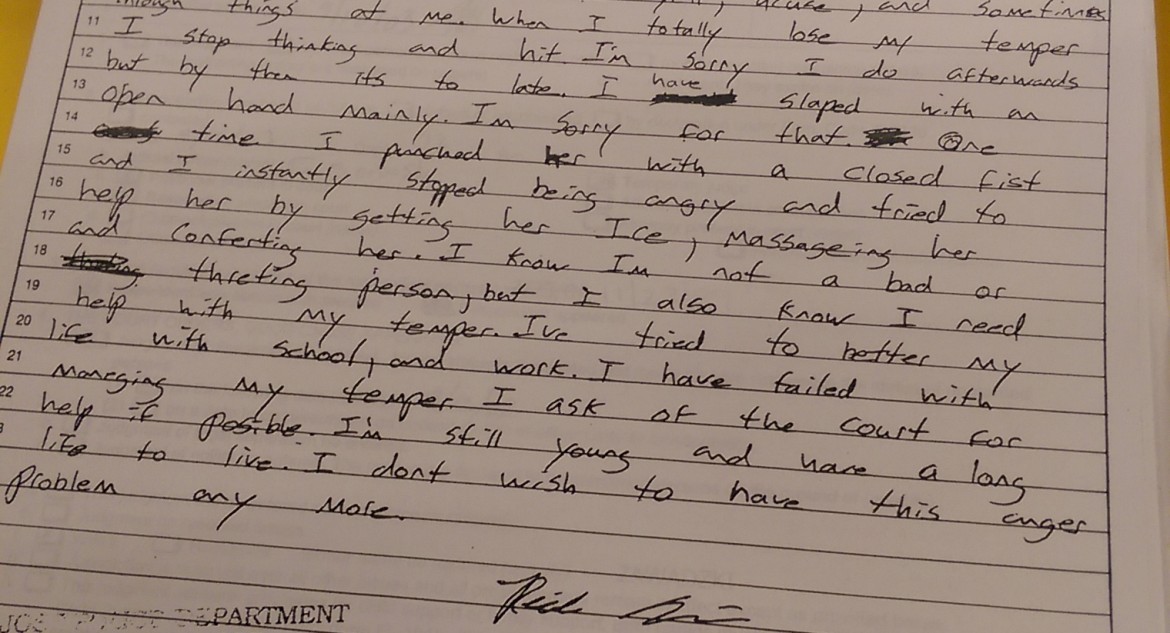 According to police, he would whip his first wife with belts and a gray printer cable until her skin split and welted. Early in their relationship, according to court records, he learned to hide his abuse by helping her apply makeup if she got a black eye. He began relegating his blows to her arms, legs, back and back of her head.

“Cuz I don’t want anyone else to see anything,” he admitted during a police interrogation in 1999. “She’s my wife, you know.”

In the years since, Monzon has gone through multiple batterer intervention programs. This time, he says, he’s a changed man.

“I know that I’ve had a lot of issues with anger and being controlling,” Monzon conceded in an interview last week. “I feel horrible. But I’m 100 percent better now.”

And yet, Monzon continues to run afoul of the law. Since her own car got totaled in a collision last year, Green has shared a vehicle with her husband, who had been driving around to work and campaign events without a license.

On Tuesday, Green called her husband an example of how people can break cycles of violence and atone for past mistakes.

“Rick is addressing his legal issues, including the suspended driver's license,” she said. “For many people in my district, and particularly for Latino males, the financial and societal consequences of one interaction with the justice system can quickly spiral into a cycle of negative interactions with the law that many find difficult to break.”

But Monzon has had far more than one run-in with the law, and the nature of his crimes coupled with Green’s reputation as an outspoken feminist puts her in an unprecedented situation in local politics. San Jose Inside reached out to other candidates in the 27th Assembly District race but they declined to comment.

It seems unlikely that Green, who served as the 2015 president of Democratic Activists for Women Now (DAWN), planned to address her husband’s record, or that she even knew the extent of his abuse.

Several people close to the candidate said their shotgun marriage in Nevada—a month before a staged engagement proposal on a San Jose Summer Jazz Fest stage in August—raised a red flag, as has Monzon’s perpetual presence on the campaign trail, which has made it hard for friends to find a private moment with Green.

In a message sent to members last week, DAWN’s board of directors called San Jose Inside’s article about Monzon’s crimes against women an assault on Green’s reputation by “sensationalizing the issue of domestic violence.”

Not everyone in DAWN’s leadership signed off on the rebuttal, however.

Barbara Keegan, who sits on the Santa Clara Valley Water District board of directors, resigned from DAWN’s board last week. Though she gave no reason in her email resignation, sources say it was because the board’s response downplayed the issue of domestic violence.

Other members of DAWN say they will not renew their membership because of how the organization handled the issue. A substantial number of unsubscription requests followed the email DAWN sent out last week, according to one of the group’s board members.

“All of us are on the same page trying to watch out for [Green] as best we can,” a close friend says. “But [Monzon] won’t let us get too close to her anymore.”