One of those political volleys came from San Jose Councilman Ash Kalra, who is running against former Vice Mayor Madison Nguyen for the open 27th Assembly District seat. Kalra held a press conference on Monday to announce that “wealthy special interests” have spent millions of dollars to help his opponent get elected.

Much of the support came from billionaire-backed groups that have opposed rent control and boosted private charter schools, according to fundraising records.

“People are asking why I’m doing this now with the ballots coming out next week,” Kalra said outside Leyva Middle School. “Well, it’s because the $3 million mark just got hit. That’s a significant amount of money to influence our community and our city.”

Some of that money has paid for attack ads that tried to make it look like Kalra skipped City Council meetings. The Mercury News debunked that claim leading up to the primary election, in which Nguyen emerged as the frontrunner.

Nguyen brushed off the allegations that she’s bought and paid for as a political ploy, a way for Kalra to duck scrutiny of the committees boosting his own campaign.

“This is a desperate attacking from a losing candidate,” Julie Edwards, Nguyen’s campaign consultant, told San Jose Inside. “Ash Kalra received nearly a half million in independent spending on his behalf in the primary—now he hypocritically attacks Madison. Why? Because she beat him by 15 percent in June and is outpolling him now due to her stronger message and stronger record of working to expand opportunity in San Jose. This isn't about outside spending. It's about a flailing campaign looking for any excuse to shift the blame for their poor performance.”

Meanwhile in the city of Santa Clara, community activists lobbed similar charges against the San Francisco 49ers organization, which plays in and operates the city’s billion-dollar Levi’s Stadium. Stand Up for Santa Clara, a group of community watchdogs, accused the franchise of secretly bankrolling campaigns against Mayor Lisa Gillmor and other council members who have been critical of the team.

Stand Up for Santa Clara spokesman Burt Field held a press conference Tuesday to illustrate flow charts of what he called a “money-laundering scheme” by the 49ers.

According to Field, the team has cloaked its political involvement by filtering money through a nonprofit called Bluepac, which doesn’t have to disclose the identity of its funders. The tax-exempt organization donated $49,265 to an independent committee called Citizens for Economic Council that supports council hopefuls Ahmad Rafah, Mohammed Nadeem, John McLemore and ex-Mayor Patty Mahan.

In his presentation, Field pointed out that Bluepac founder Doug Chan works at the same law firm as Rich Robinson, a political consultant who worked on a pro-Levi’s Stadium campaign in 2010.

Bluepac cash has paid for attack ads against council members Debi Davis and Kathy Watanabe, who joined Gillmor in calling for an audit on how much the city spends on the sports stadium. Some of those ads took shots at Gillmor, whose term isn’t up yet.

Bob Lange, the 49ers’ vice president of communications, provided the following statement from the club: “This organization does not make a practice of commenting on political matters and will not begin doing so now in response to unsubstantiated rumors that support the personal agendas of local politicians.”

Gillmor—who replaced Mayor Jamie Matthews when he abruptly quit after the Super Bowl—called on 49ers CEO Jed York to “come clean” about which candidates he’s backing in the Nov. 8 council election.

“Certainly, if you want to support candidates, be honest about it,” Gillmor told reporters. “Come forward, write your checks the way you normally do. We have limits on contributions in our city. Do it the honest, legal way.” 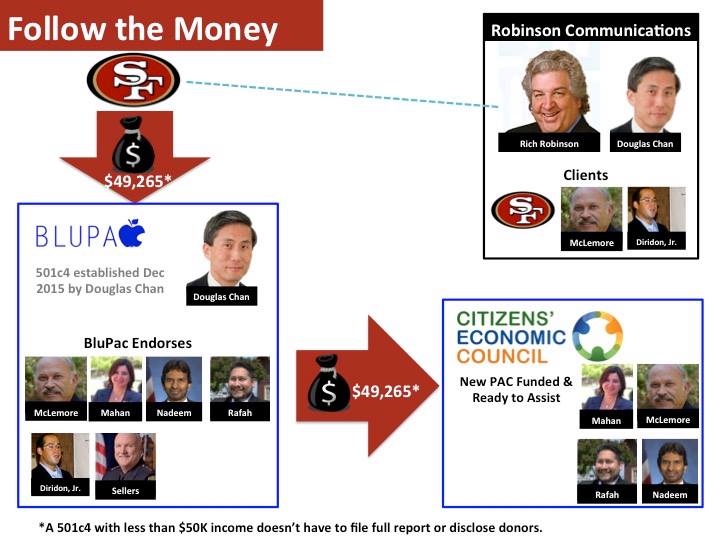