Some wore red in protest, some stayed home from work, others took to the streets and held a moment of silence for equal rights.

San Jose resident Telesia Manuleleua was one of many women across the globe Wednesday to attend rallies in honor of International Women’s Day. She held a small sign reading, “I can’t keep quiet,” as she maneuvered her way through a sea of people dressed in red at San Jose City Hall. 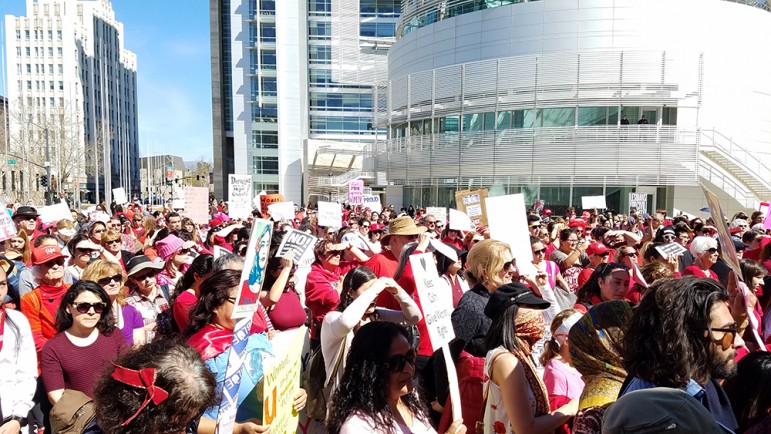 A diverse crowd of several hundred came together in San Jose for the “A Day Without A Woman Rally,” which organized in opposition to Donald Trump’s administration while also supporting gender equality.

“My rights are being conquered by the government and I will not stand for that,” Manuleleua said. “Trump is impeding on all these women’s rights and that’s not acceptable.”

The rally kicked off to the tune of Woody Guthrie’s “This Land is Your Land,” which has been a staple to the resistance movement. Women held signs reading “Kindness over fear,” “Women’s rights are human rights,” “Sluts for open borders,” and more signs that ranged between serious to tongue-in-cheek 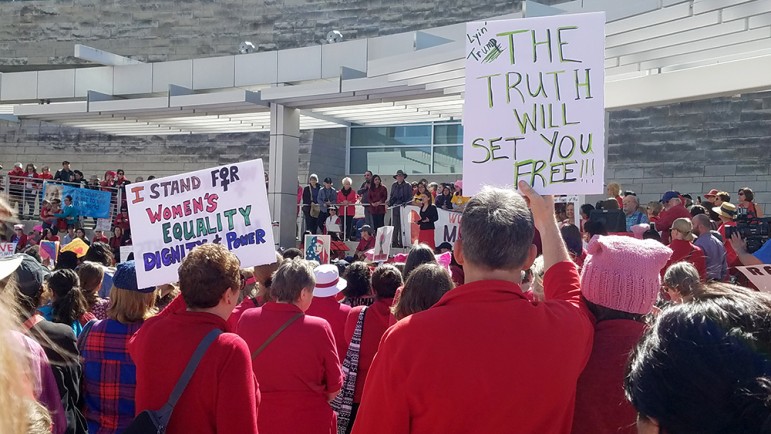 Many people brought their own signs to Wednesday’s rally. (Photo by Vicente Serna)

“Just because you are women, know one thing, this great state of California stands behind you every step of the way,” said Kevin de Léon, president of the state Senate.

“I’m so proud to be a Californian,” de Léon continued. “Because on November 9th, Californians by a margin of millions, two to one, rejected the policy fueled by resentment, bigotry and misogyny.”

A handful of people wondered why de Léon, a man, would lead off speakers at a Women’s Day Rally, but the grumbling was short-lived. The rally focused on women’s rights as well as issues of immigration, LGBTQ rights, racism and healthcare.

County Supervisor Cindy Chavez and Gabrielle Antolovich, president of the Billy DeFrank LGBTQ Community Center were two of many speakers.

“I stand for equal pay, I stand for reproductive health rights, I stand for a voice on the job,” Chavez said. “I want girls to grow up knowing they have as much value as the boys do.”

Students from DCP El Camino Middle School’s RISEUP group spoke about their personal experiences as racial minorities. The group started with a reading of Maya Angelou’s poem, “Still I Rise.” Students then took turns sharing their own experiences.

“I live in a duplex with my mom,” said DCP student Isabel Gutierrez. “She came from Guadalajara, Mexico.” Gutierrez added that her mother supported her in joining RISEUP because she say her daughter’s passion. Another student shared a story of her mother getting fired from a job for being an immigrant. 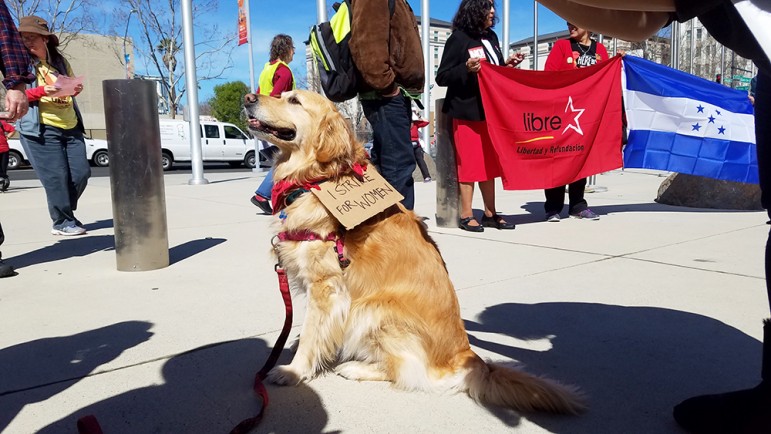 This protester was a very good boy. (Photo by Vicente Serna)