The venerable Café Stritch will be reinvented as a new venue in the coming months as the keys are turned over to the jazz bar’s former general manager, Andrew Saman.

The establishment will be known as Mama Kin, Saman says, and will continue to book jazz shows while expanding with other types of music. “We’ll keep the same vibe and hope to get back the regulars,” he said. “We’ll also open it up and make it a little livelier.”

Closed for almost two years as an entertainment venue and food establishment, the transfer marks the end of an era for the Borkenhagen family, which has operated businesses at 374 S. 1st Street for 45 years.

Steve Borkenhagen co-founded the Eulipia jazz club in 1977, back when S. 1st Street, now known as the SoFA District, was populated by adult establishments and downtown San Jose had been reduced to a ghost town after decades of neglect.

Eulipia expanded into a white tablecloth restaurant and became a symbol of downtown’s revival during the 1980s. Its upstairs space hosted theater performances and events, including a one-man residency by then little-known comedian Rob Schneider, before he became a cast member of Saturday Night Live.

In 2102, Eulipia became a casual dining spot and was rebranded Café Stritch, returned to its roots as a jazz club. Michael Borkenhagen, Steve’s son, took over operations while brother Max booked a roster of artists that ranged from jazz purists to experimental and indie rock, drawing music lovers from around the Bay Area. Notable acts included Steve Turre, James Carter, Tony Lindsay, Marcus Shelby and Built to Spill.

The straight alto saxophone of legendary multi-instrumentalist Rahsaan Roland Kirk, known as a “stritch,” was hung over the stage. An annual Rahsaanathon was held from 2012 to 2019. Poetry slams and parties for the Cinequest film festival took place there. Memorial events for beat generation icons Carolyn Cassady and Al Hinkle were held. Café Stritch’s stage was also a centerpiece of the San Jose Jazz Festival and the C2SV music festival, including a performance by the Lemonheads. 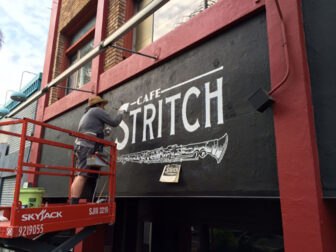 Entertainment was suspended with the first shelter-in-place order in early 2020 pandemic, and the venue went dark completely after a short-lived attempt at take-out food. After nearly two years of no business, and key personnel moving out of the area, Michael Borkenhagen said, “The setback of being closed for so long made it too challenging to reopen.”

Saman is a 28-year veteran of the entertainment industry whose career includes management stints at SoFA District establishments Rock Bar, Continental and The Ritz, as well as San Francisco’s Hawthorn. He will be joined in the venture by businessman Sam Becker. 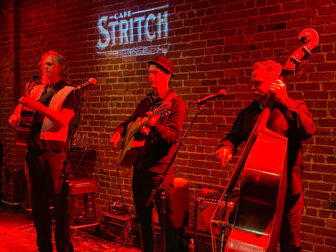