Santa Clara Councilwoman Kathy Watanabe got caught this month blocking a Twitter user on her now-deleted public social media account and then opted to get rid of the profile rather than answer questions about it.

In a Jan. 13 tweet, a Twitter user identifying himself as David Cohen (no known relation to the newly-elected San Jose councilman) claimed Watanabe blocked him on Twitter, offering a screenshot as proof. 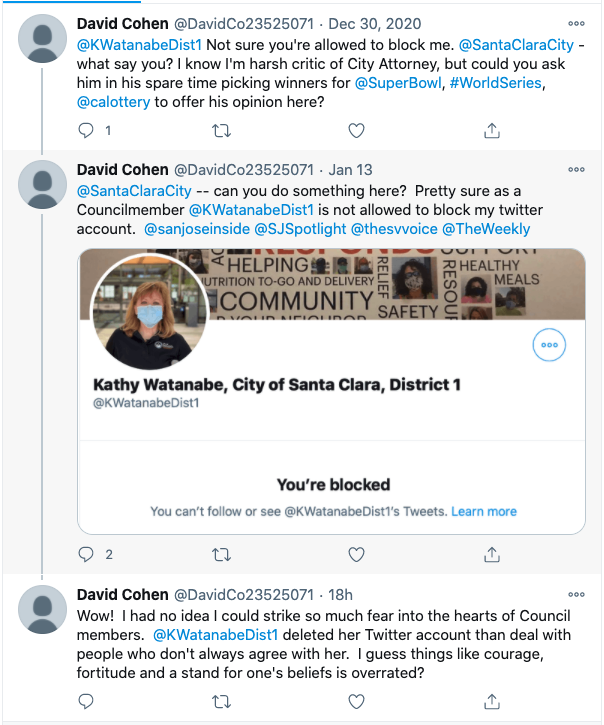 But precedent frowns on that after a federal appeals court in 2019 upheld a ruling that now-former President Donald Trump couldn’t block his critics on social media. The same goes for local officials, if the account is used to disseminate public information or conduct government business, according to David Snyder, executive director for the First Amendment Coalition.

“Courts have been pretty clear that creates a public forum, and public officials therefore cannot discriminate on who gets to participate in that forum based on the person's viewpoint,” he said.

There may be some narrow exceptions to the no-blocking rule, as long as the same standards are applied to every follower and not because the Twitter user doesn't agree with the politician, Snyder added.

But when asked why she blocked Cohen, Watanabe demurred, stating she “deleted [her] public account and just [has] a personal account.”

As of Monday afternoon, the account in question, @KWatanabeDist1—which prominently identified her as the city’s District 1 council member in the name and bio—was active and showed the councilwoman had last tweeted Jan. 6. Her recent tweets were all related to Santa Clara business.

Watanabe also appears to have a second private Twitter account, which does not identify her as a council member.

When asked again about the account that blocked Cohen, Watanabe dodged the question, insisted she had no public account at all.

Eventually, she deleted the profile.

The city’s new flack, Lon Peterson, peddled similar misinformation the following day, characterizing the account as a personal one.

When asked, Peterson added that Watanabe “terminated” it after she reported “a person who did not appear to be following Twitter’s rules and terms of service.”