Silicon Valley has always suffered from a split personality, and for that it can be thankful that it only half-resembles Wall Street.

The expectation that a business, or startup or an app should have to save the world, or at least extend a helping hand, is to forget that companies have only recently become human, and only to the extent that they are better equipped to fund political free speech. This is Silicon Valley, where most new ideas are anointed as disruptive, or a game changer, even if many of us don’t know where or what game is being played.

Last week, the Tech Museum held its annual award show, and I expected to take a resigned part in that game, to be wowed for all the wrong reasons. But every now and then a cynic finds an event that flips expectations, regardless of black ties and ball gowns.

The Tech Awards, now in its 15th year, celebrated 10 laureates in the San Jose Convention Center, all of whom have leveraged technology for humanitarian purposes—and not just because saving the world seems like a clever marketing strategy.

All recipients were well-deserving of trophies, but a few in particular blew away a writer who had every intention of removing a peg from the pedestal:

Near the end of the show I bumped into Paul Mesarcik, the 25-year-old South African creator of Lumkani, a fire detection system for “informal settlements,” or what might be called shantytowns. Smoke detectors, he found, were impractical for most of these homes, because people use open fires for cooking, heat and reading light. At an age when I was still getting kicked out of school, Mesarcik has found a way to save lives and remain self-effacing.

Silicon Valley won’t save the world on its own, but for one night it provided a much-needed reprieve from the suggestion that it’s supposed to all alone. 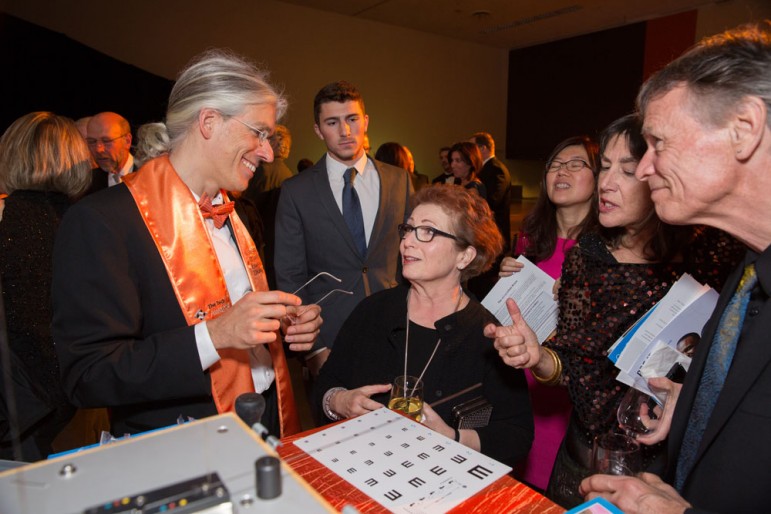 Martin Aufmuth, left, invented a box that can create as many as 50,000 pairs of reading glasses that cost roughly a dollar per frame.
(Photo by Jakob Mosur, courtesy of Tech Museum)