Neo-Nazi or Bernie Bro? That is the question, and the answer appears to be the latter.

But the answer raises a few more questions.

Last week San Jose Inside published an “I Saw You” column that appears weekly in Metro Silicon Valley’s print edition. An unnamed reader submitted an anecdote about a man standing in a garage overlooking the San Jose Women’s March, where he reportedly began flipping people off while holding a Swastika symbol. A photo that accompanied the story online showed two men, one holding the small sign and the other possessing a camera with a long lens.

The reaction on Facebook and this website was immediate and all over the map, as some readers boldly opposed hate speech—a few went overboard, making threats that have apparently been removed—while others argued that the men were actually protesters.

We haven’t been able to speak with either of the men in the photo, but commenters have since pointed out that the sign the man held was actually an anti-Donald Trump protest symbol. From a distance it looks to be a Swastika, but up close the sign consists of four large “T” letters and smaller letters “RUMP” filling out the extra space. 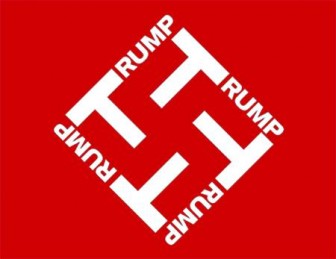 SJSU lecturer Joe Miller says this is the symbol an unknown man possessed at the San Jose Women’s March. (Image via Facebook)

Joe Miller, a lecturer on design at San Jose State University, reached out to San Jose Inside and confirmed that he saw the man holding the sign.

“I kind of lumped it in my mind with the ‘Fuck Trump’ posters that day, which there were many more of,” Miller said. “I heard, too, that he was flipping people off, but I never saw that at the time.”

A student in Miller’s class, which discussed the incident and the design principles of the protest symbol, identified the man’s hat as pro-Bernie Sanders paraphernalia.

Since last week, a few questions have been raised:

In short: yes. We strive to be as transparent as possible about the news and the way we gather it. The packaging of the post could have been more precise, but the debate surrounding President Trump requires all of us to consider what kind of country we’re becoming and what style of governance is taking place under this new administration. Reports of hate crimes are on the rise since Trump won the election, and—all due respect to symbols of auspiciousness—no image holds greater association with evil than a red Swastika. We rely on readers and sources to give us information, and many times that information is incomplete.

Yes, it’s a poor design. Trump has parroted fascist remarks and deserves criticism. But it’s a terribly mixed message to have anti-Trump protesters carrying around what appear to be Swastikas from just a short distance.

Yes, it was unwise. Speech is protected, but perception, as Congressman Ro Khanna recently said, takes on greater significance in a sound bite culture.