When Silicon Valley came under a shelter-in-place order last March to prevent the spread of the coronavirus, its typically gridlocked roads went quiet as businesses shuttered or moved their employees to remote work.

By April 6, Santa Clara County saw its biggest decrease in driving with 64 percent less vehicle miles traveled than usual, according to INRIX and the Bureau of Transportation Statistics. Greenhouse gas emissions declined and cities across the Bay Area closed streets to through traffic to offer more room for social distancing, outdoor dining, bicyclists and pedestrians.

Now transportation experts wonder how long the changes will last—and whether Silicon Valley will return to its bustling car-dependent lives when the pandemic ends.

Kevin Fang, an associate professor at Sonoma State University and a research associate at the Mineta Transportation Institute says traffic volume has already started to rebound from its lowest point—to be expected as restrictions loosen. But what comes next will rely largely on the region’s businesses, he said Tuesday during a panel for Joint Venture Silicon Valley’s annual State of the Valley conference.

That is the question on everyone's mind, from big tech, to the workers that typically staff pastoral office campuses, and even real estate agents and owners.

Cities across the county signed on, and some companies publicly made the commitment, but the biggest names in Silicon Valley don't currently appear on the list of pledges to reduce the number of commutes for their workers.

But perhaps even more importantly, Fang wonders whether workers and residents will “demand things” now that they’ve been exposed to different processes and systems.

“The Covid-era has changed how we interact and advocate for things in terms of participation in public meetings and we are reaching out and making our voices heard as citizens,” he said. “Shaking that up from, say, the traditional meeting at 7pm that’s accessible to some, but not everybody—might there be other ways that societies change?”

Indeed, Shiloh Ballard, executive director for the Silicon Valley Bicycle Coalition, says people adapted to the changes that came with the pandemic fast. And even when people begin filing back into office buildings, she's not convinced everyone will be eager to return entirely to the way things were before—traffic jams and all.

“What should the ideal transportation ecosystem look like in the future?” she asked during Tuesday's panel. “Bikes, public transit, walking, 15-minute communities and potentially shared automated vehicles—is that what our system should look like? Probably. And so if that’s the case, what are we doing now to move us towards that?”

The discussion Tuesday came on the heels of newly released data from a report commissioned by the Silicon Valley Bicycle Coalition and the Santa Clara County Public Health Department. The study, which was conducted by Change Research, interviewed 1,009 participants from March 6-11, 2020 on their transportation behaviors. The Mineta Transportation Institute analyzed the results.

With many Silicon Valley residents relying heavily on cars, researchers asked respondents whether they agreed with the statement: “Many of the places I need to go are close enough to reach by bicycle.” The only respondents to say that was true lived in downtown San Jose. 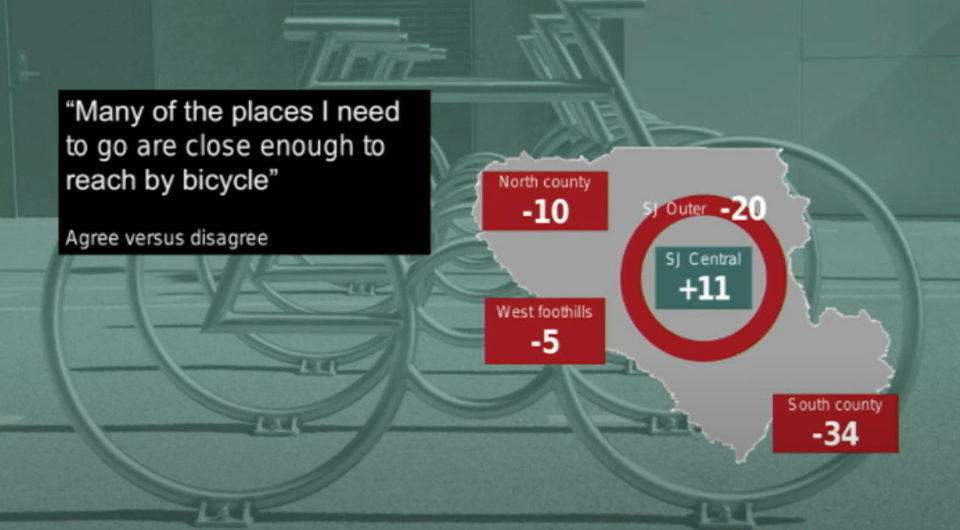 Only respondents living in downtown San Jose said that it was possible to get to places they wanted to go by bike.

Ballard says those results are due to the way cities are being planned and built.

“This data shows us that if we’re trying to build a transportation ecosystem where the system is resilient—it’s affordable, it’s accessible, it’s environmentally sustainable, it’s healthy—land use matters," she said. “We have to build more densely. ... In the downtown area people are riding for transportation because we’re building those areas in a way everything’s kind of within a 15-minute walk or bike ride. But once you get to areas like Gilroy, it’s not that feasible for people to ride their bike to the grocery store.”

Watch the full discussion from Tuesday's panel below.