For the people who commissioned the mural, it’s a visual ode to San Jose’s potential. For the artist who painted the piece, it’s a convergence of her own past and present.

Lila Gemellos painted some of downtown’s most prominent landmarks—San Pedro Square, the Bank of Italy and the Museum of Modern Art—on the side of the Fountain Alley building, which is being transformed into a brand new tower by the mural’s patron, Urban Catalyst. She also included images of the developer’s future projects—namely The Icon tower slated for the former Chevron gas station at 147 E. Santa Clara St. and the eight-story hotel planned for the now-shuttered Keystone Restaurant Supply site at San Carlos and Josefa streets.

“This is Urban Catalyst’s story of what they want to see for San Jose: a busy metropolis where the past and present collide, where the experience of San Jose is colored, rich and vibrant,” Gemellos says.

But the city’s story is part of her own narrative, too. 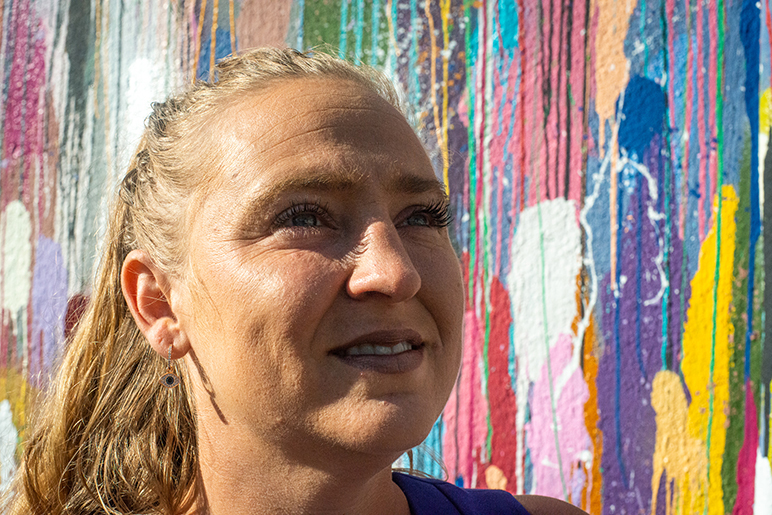 Lili Gemellos says the mural is a love letter to the city that raised her. (Photo by Nicholas Chan)

A San Jose native, Gemellos says she once put her dream of becoming an artist on hold for a career in the real estate industry. So when Urban Catalyst recruited her to adorn the former Lido Nightclub with a vibrant painted cityscape, it intertwined her professional pursuits and personal passion.

Gemellos took her first oil painting class at San Jose’s Museum of Modern Art—to which she pays homage in the mural—when she was 5 years old and began selling her paintings when she was 8. In her late teens, she majored in art studio with a concentration in oil painting at UC Riverside.

But those halcyon days came to an abrupt halt. Just two quarters into her college career, she was diagnosed with a debilitating thyroid disease.

“I almost had to give up my dream of becoming an artist,” Gemellos says. “I got sick and I came home. And I needed workers’ benefits.”

So, she did what she felt necessary to survive, taking up a job as an accounting clerk for a property developer. By night, however, she continued to create and sell art.

The economic recession of 2008 devastated the real estate industry, forcing companies like hers to dramatically downsize. She was one of the casualties. The layoff marked a turning point, though. For the first time in a long time, she began seriously considering making a living as a full-time artist.

“I was 25,” Gemellos recalls. “I had the opportunity in the prime of my life to really see if I can make this [art] happen.”

She took plenty of small-time gigs. She painted faces. She made balloon animals at parties. She painted skate and resold them for $100 a pop. “I would go around Starbucks for eight hours a day and pass out cards, discussing what makes my shoes different,” Gemellos says.

The tireless talent-for-hire finally got a break when a customer asked her to paint a mural on a new house in Gilroy. After that, she began to get a steady stream of mural jobs. Among the many murals she’s worked on in the years since are the ones she painted at Falafel’s Drive in, Dove Hill Elementary School and Eastridge Mall.

Standing in front of the piece on a recent morning, Urban Catalyst Chief Operating Officers Joshua Burroughs admired the dripping paint at the bottom of the mural, which he said denotes the melting pot of cultures that comprise San Jose.

Among many more things the mural represents, Gemellos says, it’s a symbol of opportunity—a sign that things are looking up for the city.

“We’re from paradise—from somewhere that’s economically stable relative to the rest of the world,” she says. “I know some people don’t feel this way, but when you are born here, you kind of win the lottery.” 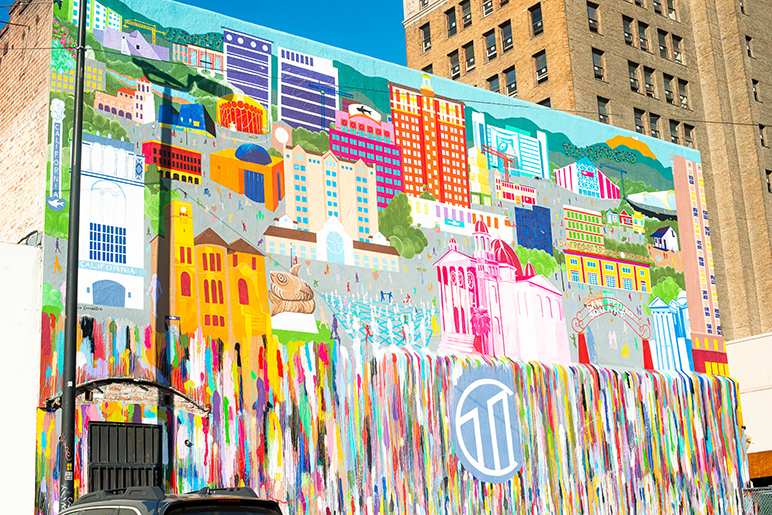 The dripping paint represents the melting pot of cultures that makes San Jose so unique. (Photo by Nicholas Chan)