Bounded by the cluttered shelves of a mid-century one-car garage, his laboratory for the time being, Tim McCormick tinkers with the 64-square-foot cube he hopes will “hack the housing crisis.”

As he envisions it, an 8x8x8-foot skeleton of perforated square steel tubes, small enough to fit in a parking spot, could become an “erector set” suitable home or workspace. From there, one could build up or out—as spartan as a post-apocalyptic bomb shelter or as elaborate as a several-story dwelling. Modules could be separate or stacked, side panels swapped, dimensions complementing existing urban spaces, like a small yard or a garage.

“It’s about creating systems to solve a very wide set of potential needs in the built environment,” he says, “analogous to how Linux or Android [and other open-source software] are used in a wide variety of computing contexts.”

McCormick calls the low-cost, open-source units Knight Houses, a reinvention of the home as a product that consumers could order online or build themselves. Under the aegis of Houslets, the alternative housing research effort he’s spearheading, McCormick is one of nine San Jose finalists vying for a slice of $5 million in grant money being distributed across the country by the Knight Cities Challenge. “If we do this right,” McCormick says, “we can transform Silicon Valley’s urban ecosystem.”

Tiny homes are nothing new. If anything, they’re part of an age-old tradition of carving out space, of squatting and occupying, of highly adaptive living systems. Last year, San Jose city officials floated the idea of building micro-cottages to shelter the homeless: 150-square-foot, $5,000-apiece pods that could hunker down on unused public land or empty warehouses as transitional housing options.

“We studied the idea and found that we didn’t have the public land to make this work,” says Ray Bramson, San Jose’s homelessness response manager. Santa Clara County is working on a similar review. “We’ll see what the county comes up with,” he says. The small units could serve a diverse demographic—not just for the homeless, McCormick says, but also young singles, students and the elderly looking to downsize.

“There’s a global archetype: faced with the hierarchy and status of the environment, the little man wants to carve out a piece of it—trailers, rooms, attics, cottages, in-law units,” McCormick says. “That’s what we can do, design and implement a fleet of moveable housing units, which can be quickly deployed, moved around and potentially combined into larger units.”

The concept has gained more traction in recent years as soaring housing costs continue to price middle class families out of urban job centers. For perspective, consider that “middle class” in the San Jose metro area means a household that earns $94,077 annually, according to real estate site Trulia. By that measure, only 30 percent of homes in the region’s market are affordable enough for middle-income earners.

“So our challenge is how to bring the cost down,” says McCormick, who spent the past few years living in a 200-square-foot converted garage in Palo Alto. The best way to do that, he posits, is to cut down on size. Americans have learned to equate square-footage with value, however, making the notion of downsizing an insurgent idea.

McCormick is a relative newcomer to the tiny home movement. Early pioneers in the 1970s advocated for scaled-back homes in reaction to widespread suburbanization that normalized excessive living spaces. The average size of a single family home four decades ago hovered around 1,780 square feet. Each new U.S. Census Bureau count broke another record, the latest in 2013 when the average home size stopped just shy of 2,600 square feet, despite a concurrent decrease in the size of the average family. The housing market’s free-fall in 2007 galvanized McCormick and others’ push for smaller living quarters.

“We had this huge breakdown, where the housing system is stammering,” he says. “All of a sudden regular middle-class people can’t find housing. It became a first-world problem, so to speak.”

McCormick has lived in plenty of small, sometimes improbable spaces. Growing up in London, his parents lived in a 1,000-square-foot home. His bedroom, called a “box room,” was no more than 48 square feet—intended as a storage space, really. His father’s job as an architect moved the family to various urban hubs, always settling into economical living quarters. “That was a key, informative influence,” he says. “As long as I could remember, I was going to building sites, low-income housing projects.”

Locally, in the Santa Cruz Mountains just minutes south of Los Gatos, tiny cottages—not all permitted—dot the forested landscape. One property owner built a yurt, a circular dwelling propped up by stilts on a hillside. Another, who’d rather just go by Bob, constructed a 244-square-foot cottage on a dusty plateau overlooking redwood forests and, on a clear day, a shimmering Monterey Bay.

“Had this trailer then I got a wild hair and decided to build a house on it,” says Bob, trekking up to the place in his brown work boots, faded Wranglers and pine green plaid shirt with sleeves torn at the elbows.

Wide windows—the bulk of which he got for free from contractors—fill the cottage with natural light, giving it a roomy feel despite the limited dimensions. A former mechanical engineer, Bob crafted the place from ruddy cuts of ancient heart redwood. The logs had been lying around for a century or so before he decided to slice them to size with a sawmill he built out of an old boat trailer.

Sixteen solar panels cover the patio, far more than needed to power the home, and a sheet metal roof shelters the rest of the house. Inside, a wood-burning stove fashioned from an old water tank stands in one corner, a kitchen fills up the other, a cupboard and, overhead, a sleeping loft. The only separate room in the house is the full bathroom, with a bathtub and toilet that drains into a 1,500-gallon septic tank with a proper leach field. In all: $5,000 to build, about another $6,000 for the solar panels.

McCormick wants to see more of that self-sufficient ingenuity applied to housing in urban spaces. Given that he plans to work with pre-assembled modules, he thinks he could work within an even tighter budget.

San Jose has no zoning for micro-homes, per se, says Cheryl Wessling, spokeswoman for the city’s Planning, Building and Code Enforcement Department. To date, no one has even proposed a micro-home project to the city. “[However,] we do have a process that allows for ... unique projects,” Wessling says. “How these would come into play for the emerging concept of micro-homes would need consideration.”

The pushback often comes from neighbors who worry about parking supply and property values. Other issues: how to hook up units to plumbing and comply with zoning rules. McCormick says one way to make the idea of incorporating tiny homes within the urban landscape palatable to the public is to incentivize property owners. One model he’s looking at is a fairly new state law that give tax breaks to property owners who lease to an urban farm. McCormick suggests the same idea could be applied for micro-homes.

“Fearing people encroaching on you is human, but so is building, adapting, being able to change your environment,” McCormick says. “It’s all in how you present it.” 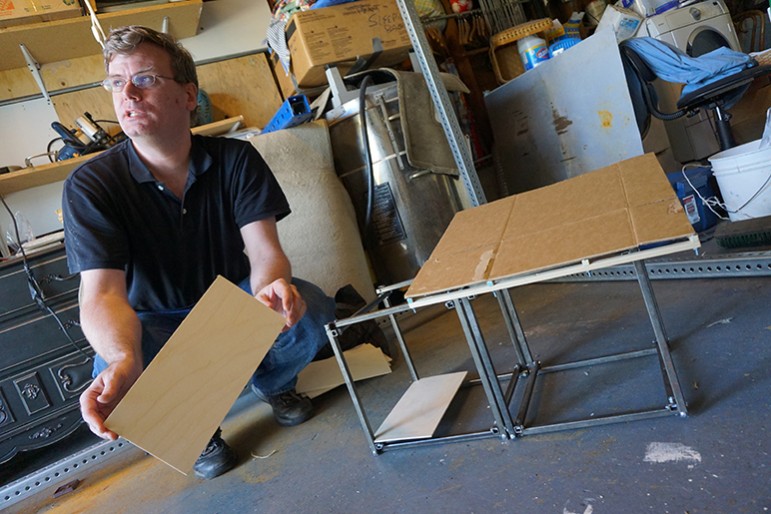