Assembly Bill 392, which would update the standard for police to use deadly force from when “objectively reasonable” to “necessary,” passed the state Senate and now awaits the governor’s signature. If it becomes law, it would make California’s police use-of-force thresholds one of the highest in the nation.

Gov. Gavin Newsom is expected to sign the bill, which he described back in May as a way to “help restore community trust in our criminal justice system.”

While proponents hail the proposed legislation as a momentous step towards ramping up police accountability, the San Jose Police Officers’ Association contends otherwise.

And to Saggau, that’s just fine, because he believes existing deadly force standards are more than adequate. The original bill would have held police officers criminally liable if they violated the law and required police officers to use de-escalation tactics. But it was amended to garner support from police unions that initially opposed AB 392.

So, the union Saggau represents can breathe a huge sigh of relief. This version, he says, “is not going to put police officers in jail for simply doing their jobs.”

“Now [we have] de-escalation?,” he continues. “San Jose, Los Angeles and San Francisco Police Departments have been doing it for decades.”

Police reform advocates are less pleased with the latest iteration of the bill, which they consider effectively useless. Black Lives Matter and Silicon Valley De-Bug withdrew their sponsorships for the bill once it was amended to the point that they felt it no longer contained any meaningful legislative fix.

“It has no teeth,” says Laurie Valdez, whose partner Antonio Guzman Lopez was fatally shot by San Jose State police officers several years ago. “They completely took out the de-escalation language. So it would not have prevented Antonio’s death.”

The killing of Guzman Lopez, which authorities ruled justified, left Valdez a single mom with a young son and teen daughter to care for.

“I sacrificed,” Valdez says of her efforts supporting earlier version of the legislation. “And then for them to weaken it? They didn't even hear my son when he spoke at some of the hearings. It fell on deaf ears.”

The term “necessary” is too ambiguous, according to Valdez. It leaves too much room for the officer’s interpretation. And she believes that there needs to be strict language for de-escalation—language that had been removed from the initial draft as seen below.

Feb. 6 version of AB 392 stated: “A peace officer shall, however, attempt to control an incident through sound tactics, including the use of time, distance, communications, tactical repositioning, and available resources, in an effort to reduce or avoid the need to use force whenever it is safe, feasible, and reasonable to do so.”

But Assemblyman Kevin McCarty (D-Sacramento), the co-author of the bill, assures that it will lead to changes on the ground.

“The intention of this bill is to add a layer of transparency and accountability that will result in more focus on de-escalation tactics and provide courts with more clarity over when use of deadly force is needed,” he said in an email.

This bill follows a series of reform efforts aimed at holding police accountable for fatal shootings and other forms of force. In 2018, AB 748 and SB 1421 were signed to grant public access to video, audio and personnel files involving fatal officer involved shootings. And San Jose State University police have since released the body cam video of the fatal officer involved shooting of Valdez’s partner.

Law enforcement lobbyists and police unions urge caution, however, lest reform advocates swing the pendulum too far. “They believe that if you just prosecute more police officers, things will just improve,” Saggau says.

But he believes that organizations like the ACLU and Black Lives Matter get so hung up on trying to put officers behind bars, that they overlook the root causes of fatal officer-involved shootings: mental illness and chronic homelessness.

“That’s not the tragedy folks want to talk about,” Saggau says. “But that’s the bread-and-butter, root cause issue.” 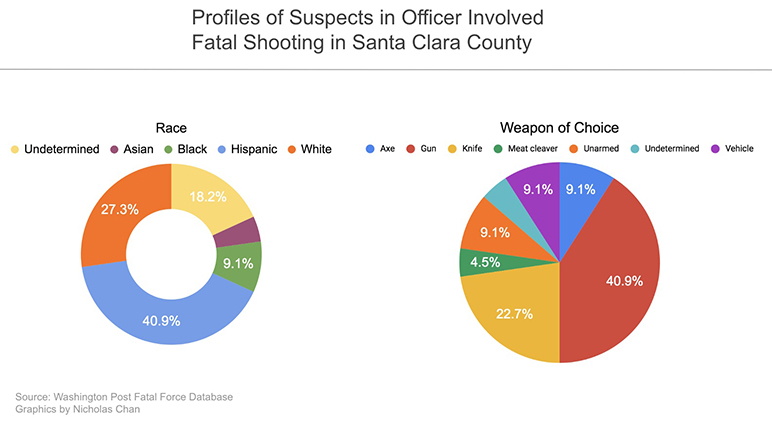 To his point, over 40 percent of suspects in officer involved fatal shootings in Santa Clara County from 2015 to 2019 suffered from mental illness. That’s 17.5 percent higher than the national average, according to a review of the Washington Post Fatal Force Database.

But AB 392 won’t change the way the San Jose Police Department operates, according to Saggau. Instead, a dueling bill, SB 230, will provide training for police officers to deal with people with physical and mental disabilities.

Protect California, a police lobbying group backed by cop unions throughout the state,  has launched an aggressive campaign in favor of SB 230.

Buchen has also labeled the trend of fatal police shootings as an “epidemic,” but Protect California says there has been a 40 percent decrease in fatal officer involved shooting incidents in California since 2015—going from 190 to 114 incidents from 2015 to 2018.

“They use extremely misleading, factually and mathematically data,” Saggau says. “It’s trending better. So the whole foundation of their bill is gutted with simple math.”

But Valdez bats away the law enforcement lobby’s arguments as spin, and says she worries that the police-backed SB 230 will only undermine AB 392.

“Once the police union backed off, saying, ‘we don’t like it but we can live with it,’ that says it in itself,” she tells San Jose Inside. “They will live with it because they know their bill SB 230 is going to totally reverse it.”