Santa Clara County supervisors voted this week to limit development across some 7,500 acres in unincorporated Coyote Valley just south of San Jose in an effort to preserve agricultural land for local farmers.

The board of supervisors on Tuesday approved a plan to limit the number of single-family homes that can be built across the parts of Coyote Valley that do not fall within the boundaries of the cities of San Jose and Morgan Hill.

County officials argued the new land-use policy for the area will ensure that the county's farmers have access to affordable farmland and that wildlife in the valley will be protected. 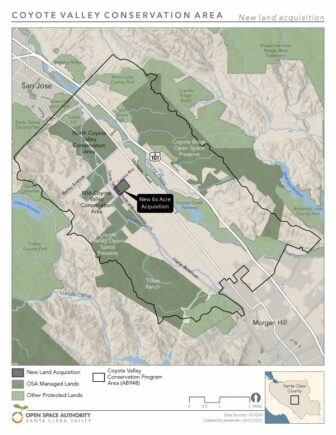 “Coyote Valley is a really unique area ... We don't often see these types of opportunities to protect areas like this for future generations,” said Supervisor Otto Lee. He said reducing urban sprawl in the valley will reduce greenhouse gas emissions.

The updated rules will require landowners seeking to build a single-family home on a parcel of land spanning more than five acres to dedicate at least 60 percent or six acres of the parcel for cultivation purposes or at least 24 acres to raising livestock.

Parcels of fewer than 5 acres will not include the minimums for on-site agriculture, according to the county.

The board's action came one month after the San Jose City Council made similar changes to its land use policy for the Coyote Valley area and nearly one year to the day that the board requested that county staff present options for a moratorium on development in the valley.

“When we met last year, I was thinking, ‘Oh, this could take three months,’ “ Supervisor Cindy Chavez said. “And the truth is that all of this is always more complicated.”

Local environmental groups lauded the board for the updated policy, praising the county for prioritizing open spaces.

According to the Santa Clara Valley Open Space Authority, farmland in the county has declined by 45 percent over the last two decades.

“The incredible collaboration between the city and county to change land use plans in favor of protecting versus paving is unprecedented,” Open Space Authority general manager Andrea Mackenzie said.

“With this decision, the county is saying it wants to preserve local agriculture and keep our area resilient in the face of climate change," said Green Foothills executive director Megan Fluke.