San Jose may lift a moratorium on new massage parlors after a year-long crackdown purged most shops with suspected ties to prostitution and human trafficking.

The City Council on Tuesday will consider the proposal by the San Jose Police Department, which in the past year has shuttered all but 45 of 191 massage parlors identified as hubs for transactional sex.

The heightened enforcement stems from a 2014 state law that gave cities more control over massage parlor regulation. San Jose enacted an ordinance in 2016 requiring such establishments to obtain licensing from the city and undergo thorough inspections.

When San Jose toughened its rules two years ago, police had identified 300 known massage businesses and issued warning letters to 100 suspected of illicit activity. The written notices, however, had little effect. 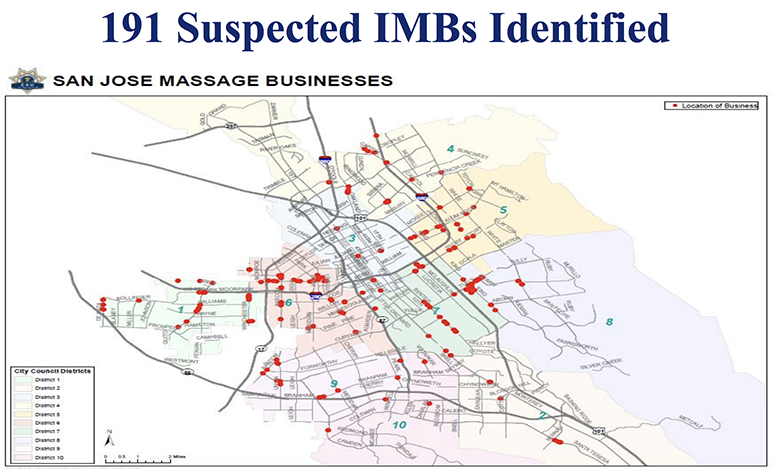 It wasn’t until the city hired new code enforcement inspectors and the police department beefed up its Vice Unit staffing last fall that it began making a dent, according to a report by Chief Eddie Garcia.

In January this year, anti-human trafficking nonprofit Polaris released a study based on open-source networks that cited Santa Clara County—and San Jose in particular—as a hotspot for illicit massage businesses with the third highest concentration of all counties nationwide. San Jose’s newly expanded Vice Unit created a list of its own based on complaints from residents and online reviews.

Within the next month, the city began reaching out to landlords to show them online reviews from sex buyers about their lessees while police ramped up undercover stings. Since the start of this year, the city has completed 114 landlord education meetings and 60 covert investigations that resulted in the closure of 107 illicit shops. Since July 2017, code enforcement officials conducted 463 inspections (with some businesses inspected more than once), issued 193 compliance orders and 106 citations.

Impact has been measured by the number of businesses applying for licensing, according to SJPD. The number of permit applications soared from just four in 2016 to 67 this year to date. By the latest tally, just 19 shops are permitted to offer massage services after seven lost their licenses because of illegal activity.

Another sign of success: the reaction from sex buyers.

“The department has SJ on lockdown, better massage in Milpitas and Cupertino.”

Seeing San Jose’s success has prompted neighboring cities to ask SJPD for advice about how to curb the influx of illegal massage parlors in their jurisdictions.

The crackdown has been a boon for legal massage businesses, which have been able to charge more in response to higher demand.

Vice Mayor Magdalena Carrasco and Councilwoman Sylvia Arenas authored a memo applauding the city’s success and requesting that SJPD expand its collaboration with anti-trafficking groups to make sure that sex workers get access to supportive services.

“We have made significant progress in weeding out illegal massage parlors and addressing illicit activities that are harmful to our community and harbor human trafficking victims,” they wrote. “These crimes are not faceless, they impact men and women who are extorted and abused. We hope that as we continue to close these establishments, we collaborate with our community partners and the County of Santa Clara to find resources for the victims and develop a successful path forward.”