UPDATE: With consultation from the city attorney, the council decided to keep Liccardo's appointment of five members to the Rules and Open Government Committee. However, without violating Brown Act rules, all council members will be allowed to attend and discuss committee items in a public forum. Only the five committee members will have the ability to vote on placing items on the open session agenda.

In one of his first decrees as San Jose mayor, Sam Liccardo announced that he wants to expand the size of each City Council committee to get more council members involved in policy work.

But Councilman Don Rocha argues that while it's a good idea in theory, the move could have disastrous consequences. The Rules and Open Government Committee, the group that decides what goes on the council agenda, has four members now. Liccardo recommended expanding the number to five. This would put other council members in jeopardy of violating the Brown Act, Rocha explains in a memo submitted today:

Council members who don't sit on the Rules Committee often attend those meetings to make a case for their policy proposals. If the body grows to five members, that option will be off the table, Rocha says.

He includes a chart showing how many times Liccardo took advantage of the chance to champion his own proposals before the Rules Committee in the past year: 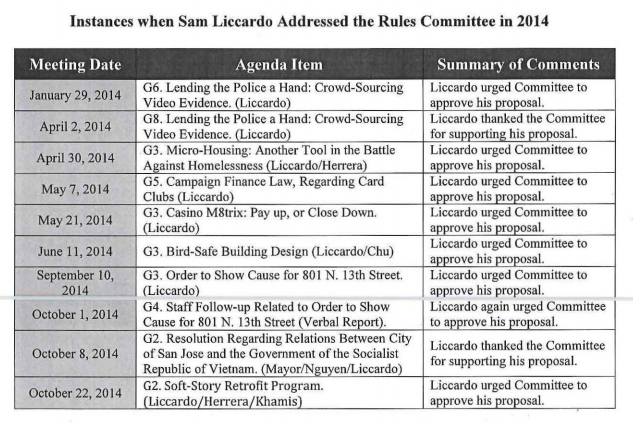 Rocha says he isn't implying that Liccardo would intentionally deny that same opportunity to his colleagues.

"The Brown Act can be a constricting law," he writes. "Therefore, I don't believe there's any direct intent to take away a prerogative that he himself has exercised a number of times over the past year."

If people are restricted from speaking before Rules, their policy ideas could get stolen, Rocha notes, referencing a proposal former Councilman Kansen Chu brought forward in March 2013. The idea was to establish travel guidelines for Vietnamese government officials. The Rules Committee declined to put the motion on the council agenda. But more than a year later, two of those same committee members who shot down the idea brought the exact proposal forward as their own.

"Given this history of the Rules Committee almost literally stealing policy ideas from other council members, it should be no wonder that council members who do not sit on the committee will often show up to make their case and try to ensure they aren't stifled," Rocha says.

But as he said earlier in his memo, Rocha implies nothing. He's just sayin'.