For a small but vocal band of self-styled patriots, the Cordoba Center poses an existential threat. They fear the two-story mosque planned for a 16-acre steppe of San Martin will bring Islam one step closer to world domination.

To defend the town of 7,000 from Muslim conquest, the Tea Party-spawned Gilroy-Morgan Hill Patriots have turned to an old ally, Peter Friedman. The soi-disant quranic scholar retired from the aviation trade a few years back to become a firearms instructor, Napoleon buff and anti-mosque crusader. Come Friday, the impassioned crier behind IslamThreat.com will swing by the town Lion’s Club to lecture flag-waving nativists on “What the Mosque Represents and the Threat of Islam.”

Friedman isn’t alone in seeing the Cordoba Center as an ominous symbol of the second largest religion behind Christianity. In a March 6 blog titled “Rural mosque or Trojan horse?” writer Janet Levy echoed his call for caution, likening the future mosque to an outpost in a holy war.

“Does this project represent a benign construction of a house of worship?” she muses on a conservative website American Thinker. “[Or is it] yet another orchestrated effort to oust traditional American values and replace them with Islamic practices, laws and beliefs?”

“They are the loud ones,” says Abbass, whose group recently revived the mosque project after trying to build it for the better part of a decade. “From day one, they turn to the same old tactics of Islam-bashing and fear mongering.”

Small-town Islamophobia is nothing new, of course. Before a lawsuit sidelined the Cordoba Center in 2012, hearings on the mosque grew so heated that police had to escort a number of hijab-wearing women to their cars.

Four years later, the congregation has started anew. But in a political culture marked by talk of a registry for Muslims and religious screening for Syrian refugees, Abbass senses a sharper edge to the discourse.

At a Feb. 25 meeting in a Morgan Hill community center, more than 200 people showed up to see the expanded scope of the mosque, with its attendant playground, campground, cultural center and cemetery. Nearly 30 of them took to the podium to voice reasonable misgivings about traffic, aesthetics and pollution.

“I’m concerned about the impact on water,” San Martin denizen Karen Harley said, “and the impact on the peacefulness of our community.” 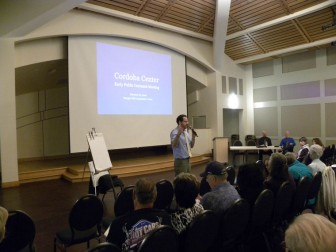 Several attendees called the scale of the Cordoba Center—with its 8,938-square-foot mosque and 14,548-square-foot meeting hall—out of place in bucolic San Martin. They hoisted signs with the bold-lettered insistence that “SIZE MATTERS.”

Others waxed indignant about less temporal concerns, like the nature of Islam. Admissions of fighting the mosque for religious reasons elicited claps, shouts and jeers from the crowd. They called Islam destructive, incapable of coexisting with other faiths. One man suggested that a mosque would incite terrorism in unincorporated South County. A man and a woman uttered thinly veiled threats about how rabbit hunters might accidentally shoot kids running around the mosque.

Anxieties over the Cordoba Center reflect a broader backlash against building minority religious spaces. The Pew Research Center, which keeps track of such disputes, found a nationwide uptick in the number of campaigns against mosque construction.

In 2000, President Bill Clinton signed into law the Religious Land Use and Institutionalized Persons Act (RLUIPA), which protects faith-based assemblies from restrictive zoning. The U.S. Department of Justice (DOJ) has since kept a close eye on local compliance as the number of mosques more than doubled to 2,100 by the 10th anniversary of the mandate.

During the last half of 2010, the DOJ launched more investigations into anti-mosque conflicts than it had in the previous nine years combined. Investigators often found ideological gripes couched in concerns about zoning, parking or environmental impacts. In Santa Clara County, however, the backlash stems not from local government but outspoken neighbors.

The Santa Clara-based Muslim Community Association found itself in a similar predicament six years ago when plans to build a 64-foot minaret drew the ire of a businessman. His appeal called the tower incompatible with the locale. But in public hearings on the matter, detractors railed more against Islam than architecture.

Controversy over the Cordoba Center erupted from the get-go. The SVIC formed in the late 1990s, when a handful of Muslim families grew tired of the rush-hour commute to the nearest mosque in Santa Clara. Initially, they met in a rented office and then a ramshackle barn, where they remain to this day. 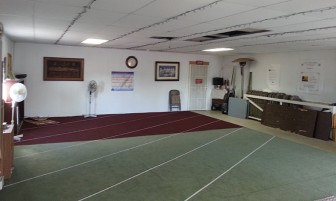 Inside the "prayer hall" of the SVIC's barn mosque.

The “barn mosque,” as Akhter calls it, sits on a dirt plot surrounded by goats, ponies and jerry-built fences. For larger holiday services, the group rents a Morgan Hill community center.

Abbass says it became clear early on that the assembly of about 100 families needed a permanent home. By 2006, they pooled enough money to buy land at Monterey Road and California Avenue. They named their mosque after the Spanish city of Cordoba, the Moorish capital once deemed Europe’s “Jewel of the Middle Ages.”

In 2012—after six years of lobbying, fundraising and emotionally fraught debate—the county Planning Commission and Board of Supervisors unanimously approved the mosque and rejected an appeal from neighbors. But a group called the People’s Coalition for Government Accountability sued, forcing SVIC to table the project. Until now.

All the while, SVIC refined its plans. The latest iteration proposes a larger mosque and community hall, a caretaker’s cottage and maintenance shed. Outside the cluster of buildings, blueprints show a cemetery, playground and campground. An orchard would buffer traffic, while native landscaping would blend the parcel’s southern edge with surrounding countryside.

Having reintroduced the project, developers can now prepare for an environmental review, says Donald Sobelman, SVIC’s pro bono attorney. Once the study wraps up in another year or so, county planning commissioners and supervisors will vote on use and cemetery permits. Meanwhile, the public will have plenty of chances to weigh in.

Abbass says he welcomes debate about the merits of the project. But he knows enough to keep his guard up, he adds, noting the flyer for Friedman’s conspiracy-tinged seminar.

“That tells you that for some people it’s not the water, not the cemetery, not the noise,” Abbass says. “It has everything to do with religious bigotry.”

Michael Moore contributed to this report.