Brock Turner walked out of jail with his head down, clutching a packet of hate mail received during his three-month incarceration for sexually assaulting a blacked-out woman last year after a campus party.

The 21-year-old’s release from Santa Clara County’s Main Jail just after 6am Friday drew a crush of reporters and activists, held back by a metal barricade. Cameras flashed as the disgraced Stanford University swimmer—wearing in the same clothes he wore to his June 2 sentencing hearing—rushed from the jail door to a white SUV that reportedly whisked him away to a nearby hotel.

Turner’s six-month sentence for sexual assault ignited a national outcry as his victim’s heartbreaking statement went viral on social media and branded him a symbol of campus rape. The case prompted California lawmakers to introduce a bill that would toughen penalties for sexual assault and a campaign to remove the judge from the bench.

Outside the jail, women’s rights groups held up signs protesting his early release and demanding to recall the judge who sentenced him to a short lockup instead of years in prison. Four hours after Turner’s abrupt exit, sexual assault survivors joined well over 100 protesters and a lineup of politicians for a rally to recall Judge Aaron Persky.

“Hey hey, ho ho, Judge Persky has got to go!” a group of about a dozen women chanted.

Nearby, a row of women hoisted anti-Persky banners that read: “I don’t always rule in favor of trust fund rapists ... Oh, wait. Yes I do.” Another sign: “Blame the victim. Ignore eyewitnesses. Tickle-slap the rapist.”

Michele Dauber, a Stanford professor leading the campaign to oust Persky, kicked off the rally by pointing out what she called a pattern of bias against women. His decision in the Turner case sent a dangerous message to other victims, she told the crowd from a podium across the street from the jail.

“I reported it even though I know how low conviction and prosecution rates are,” she said. “I knew that in order to have a shot at justice, you have to prove not only what happened to you but that you weren’t asking for it. … I thought that my assailant would be held accountable. I was wrong.”

Willingham called Persky as big a problem as Turner. 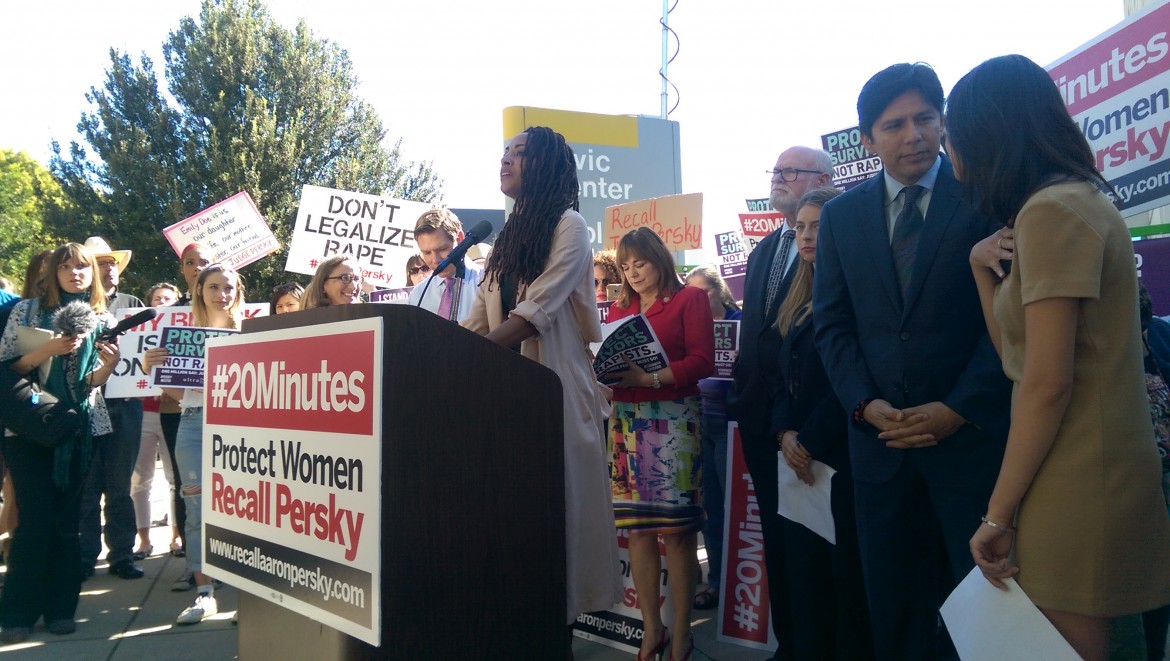 For the next hour, legislators and local leaders called for stricter penalties and harsher sentencing for sex crimes. State Senate Pro Tem Kevin de Leon (D-Los Angeles), who in 2015 authored a law that requires verbal, conscious consent to engage in sexual activity, said men should join feminists in the fight to bring justice to victims.

“This is a man’s issue as well,” he said. “Because it is men who are the perpetrators of the vast majority of these crimes toward women.”

Congressman Eric Swalwell (D-Dublin), a former prosecutor, said there is no justice in Turner’s months-long sentence and that the judge who gave it to him should resign.

“Is Judge Persky’s job more important than protecting victims in our community?” Swalwell asked, eliciting shouts of “No!” from the audience. “Recalling a judge is not easy. It’s an extreme measure, but a measure that he deserves.”

Santa Clara County District Attorney Jeff Rosen denounced Persky’s sentence in the Turner case, but said it should not cost the judge his job. Instead, Rosen put his support behind legislation that would impose stricter penalties for sexual assailants.

Leading up to the rally, he called on Gov. Jerry Brown to sign legislation that would require mandatory prison time for sexually assaulting an unconscious person. In California, using force in sexual assault already requires a prison sentence, but not in cases where the victim is incapacitated and no force is used. 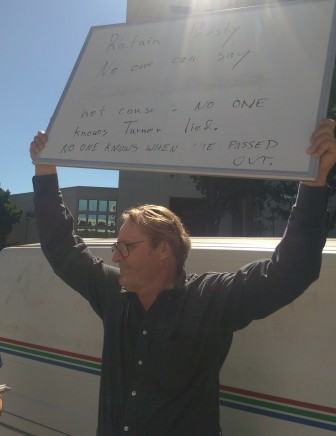 Steve White, the lone counter-protester at the rally, called the rally "a stupid lynch mob." (Photo by Jennifer Wadsworth)

“If we had our way, Brock Turner would be in state prison serving a six-year sentence, not going home,” Rosen wrote in a prepared statement. “However, our focus is on a bill that will require a state prison sentence, not probation, for anyone convicted of sexually assaulting an unconscious person. With the governor’s signature, the next Brock Turner will go to prison.“

Turner, who will serve his probation in his home state of Ohio, will remain under watch as a registered sex offender.

He will have to check in every three months to re-register and verify that he still lives at his listed address or—or risk spending a year in prison. He will have to notify authorities if he finds a new place to live. And each time he does, authorities will have to notify neighbors that a sex offender moved in nearby. By California law, his photo, name, address and felony crimes will remain online in a public database for the rest of his life.

Ro Khanna, who’s running against Congressman Mike Honda (D-San Jose) in the 17th Congressional District, said that’s not enough. “Here in the Bay Area, here in this county, we [must] send the message that under the rule of law, some people don’t get special treatment,” he said.

In sentencing Turner, Judge Persky considered his age, lack of a criminal record and a probation department report that recommended no prison time and only a “moderate” jail term. Turner’s threat of re-offending was deemed minimal based on a computerized risk-assessment test given to sex offenders called the Static 99-r. The diagnostic tool, which also factors in age, family history and criminal record, predicted that he had a low-to-moderate risk of committing another crime.

While there is a growing movement to force Persky from his judgeship, he has his allies, which include other jurists, law professors and public defenders who call it perfectly appropriate for a judge to follow a probation recommendation.

There’s also the question of whether a lengthy prison sentence would even produce the best outcome. Some prosecutors prefer getting a rapist into treatment and on the registry, as research has shown that punitive correctional interventions can make some offenders worse. The United States, unlike other industrially advanced nations, places more emphasis on retribution than rehabilitation. 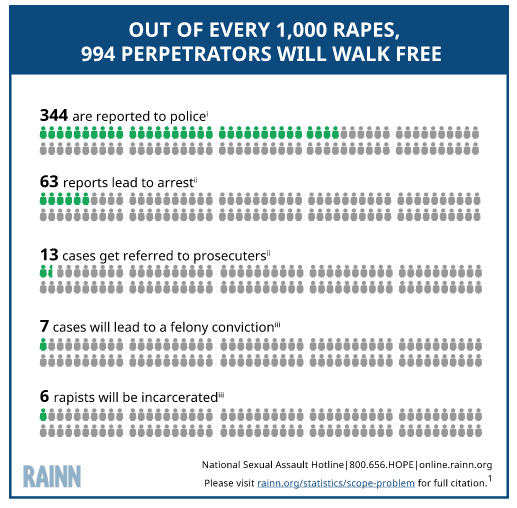 Stanford Law School graduates Emi Young and Akiva Friedlin said critics attempting to paint Persky as biased have drawn false comparisons between Turner’s case and others that seem similar at first glance. Further, they wrote, pressuring judges to impose harsher sentences because of public backlash threatens to undo years of work by criminal justice reformers to reverse the trend of mass incarceration.

“Even in anger, the public must take a hard look at the rationale and likely effect of recalling Judge Persky,” Young and Friedlin wrote in a column on Medium.“By stoking public anger with misleading claims, the recall campaign encourages a short-sighted response without accounting for the actual sources of structural injustice, or the consequences to those already burdened by inequality.”

On a website for the campaign to retain Persky, the judge—who has served 12 years on the bench—posted a message for his supporters.

“I believe strongly in judicial independence,” he wrote in what appears to be his first public statement since he became the subject of a recall effort. “I took an oath to uphold the Constitution, not to appease politicians or ideologues. When your own rights and property are at stake, you want the judge to make a fair and lawful decision, free from political influence.”

On the website, Persky points out that he began his career prosecuting hate crimes and sexual predators for the District Attorney’s Office. He has also served as a board member of the Support Network for Battered Women and received awards for his work.

“As a judge, I have heard thousands of cases,” wrote Persky, who recently moved from the criminal to civil division. “I have a reputation for being fair to both sides.”

WARNING: One of these photos is NSFW.

Signs lined the courtyard outside Santa Clara County’s Main Jail where a protest was being held for the recall of Judge Aaron Persky. (Photo by Taylor Jones)

Protesters walk back and forth from the Hall of Justice to the Main Jail, chanting to recall Judge Persky and reform the judicial system. (Photo by Taylor Jones)

A protester outside the jail. (Photo by Taylor Jones)

State Sen. Kevin de Leon talks about the importance of helping victims of sexual assault and how the judicial system needs to be more punitive toward perpetrators of sexual violence. (Photo by Taylor Jones)

Protesters attended the rally in support of the victim. (Photo by Taylor Jones)

Protesters show some skin at the rally to recall Judge Persky. (Photo by Taylor Jones)

Anni Ma, a gender equality activist, painted a provocative question on her chest: “Will I be Brock Turner’s next victim?” (Photo by Taylor Jones)