Unland, head of the Police Officers Association (POA), has slammed every public safety plan brandished by mayoral candidates who supported Measure B pension reforms, which he blames for eviscerating San Jose’s police force.

Councilmembers/mayoral candidates Sam Liccardo and Madison Nguyen both offered proposals to stave off the exodus of police academy grads. Later, they each came up with more public safety proposals, including adding back the burglary unit and hiring more officers. But Pierluigi Oliverio’s idea to allocate a bigger slice of the city’s general fund budget to the San Jose Police Department inspired Unland to wax poetic. Let's go line by line, shall we.

“Dear Mayor and City Council,” he wrote under the POA letterhead. “I will be blunt, Item 3.6 is a disastrous political stunt.”

“The main proponent must be delirious, if he believes this proposal should be taken serious.”

Unland told San Jose Inside that he’s repeated his arguments so many times to no effect that he thought this might crack the shell. Might want to re-read that part about being “taken serious.”

“No more grandstanding and no more tricks, more safety in San Jose is a Measure B fix.”

“So stop this banter, this farce, this charade, clearly this idea does not make the grade.”

This poem’s grade looks like a foregone conclusion, but there’s more.

“14,000 words, bringing back PD units cut, and budget set-asides are all in the mix, but it’s Measure B that’s the culprit and in need of a fix.”

Apparently, that’s a burn on Liccardo, who’s known for lengthy memos when a few pithy verses could suffice.

“Vote no on Item 3.6 as we tire of the latest public safety game, when we all know that it’s Measure B that is really to blame.”

Eat your heart out, Shakespeare. 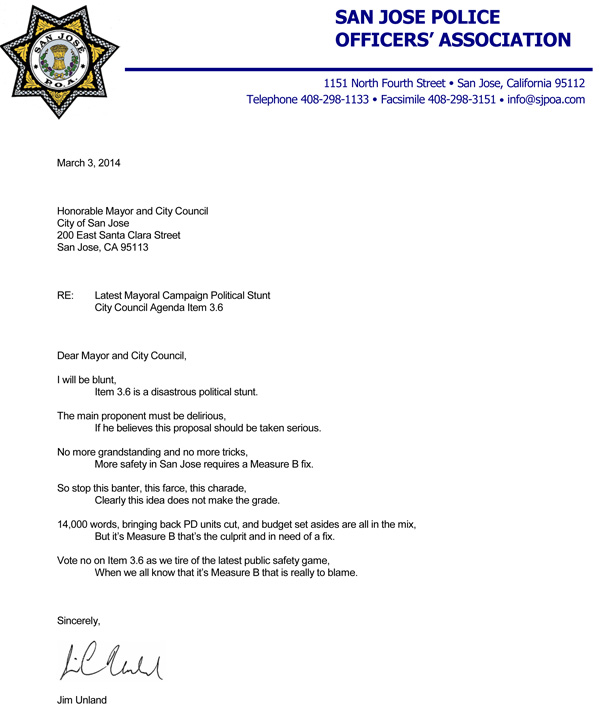