Hundreds of people on Thursday took to the streets of San Jose—at one point blocking a portion of Highway 87—to protest Donald Trump’s election to the nation’s highest office.

The demonstrations began in the afternoon when roughly 200 students from San Jose High and a few local charter schools marched to City Hall with signs denouncing the president-elect, who defined his campaign with pejorative rhetoric about minorities, Muslims and women.

Protesters made a larger showing later in the day, starting with a group of about 200 that at least doubled at its peak. Activists hoisted signs that read, “Not my president,” “Dump Trump” and more aggressive denunciations. Blasting music and chanting “peaceful protest,” they worked their way from the civic center to Highway 87, where they walked about a mile from San Carlos to Julian streets accompanied by a police escort. 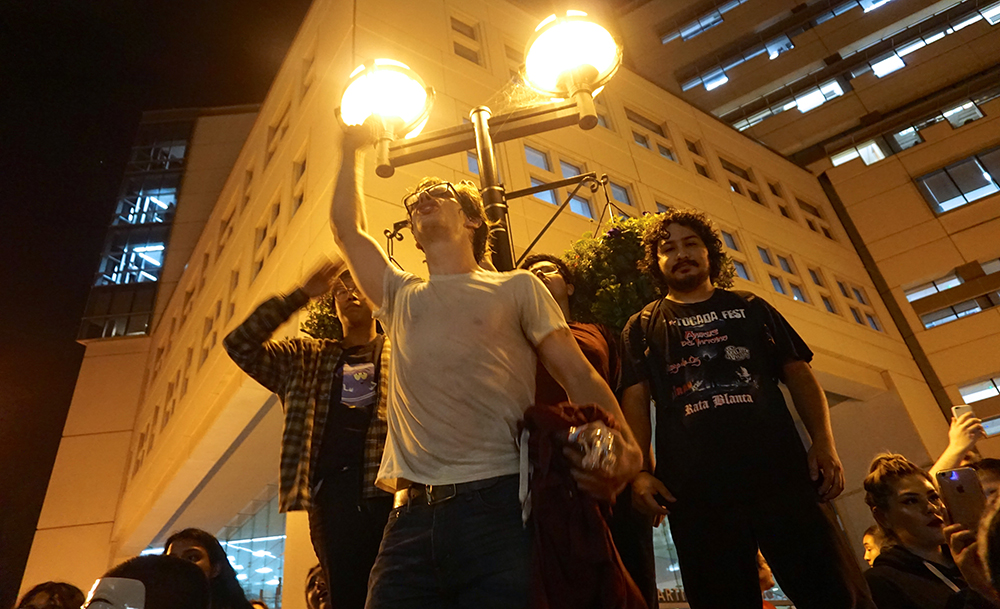 Protesters stand outside the MLK library in San Jose. (Photo by Jennifer Wadsworth)

Heightened bigotry apparently inspired by Trump’s win has been reported throughout the country, including harassment, assault and racist graffiti. During the Thursday night protest, the passenger of a car with a Trump-Pence bumper sticker leaned out the window and shouted an obscenity at some of the activists.

The morning after Election Day, someone allegedly attempted to yank a hijab off of a San Jose State University student’s head. Nineteen-year-old Esra Altun, a psychology major who attended the afternoon protest, said she collapsed to her knees, gasping for air after the attack, which took place in a parking garage on Fourth and San Salvador streets.

University spokeswoman Pat Harris said it’s unclear who attacked her, but an investigation is underway.

“We are, of course, very concerned that this has occurred on our campus,” Harris said. “No one should experience this kind of behavior at San Jose State.”

That same day, San Jose City College sent out a campus-wide alert about “hate motivated vandalism” in a restroom stall. 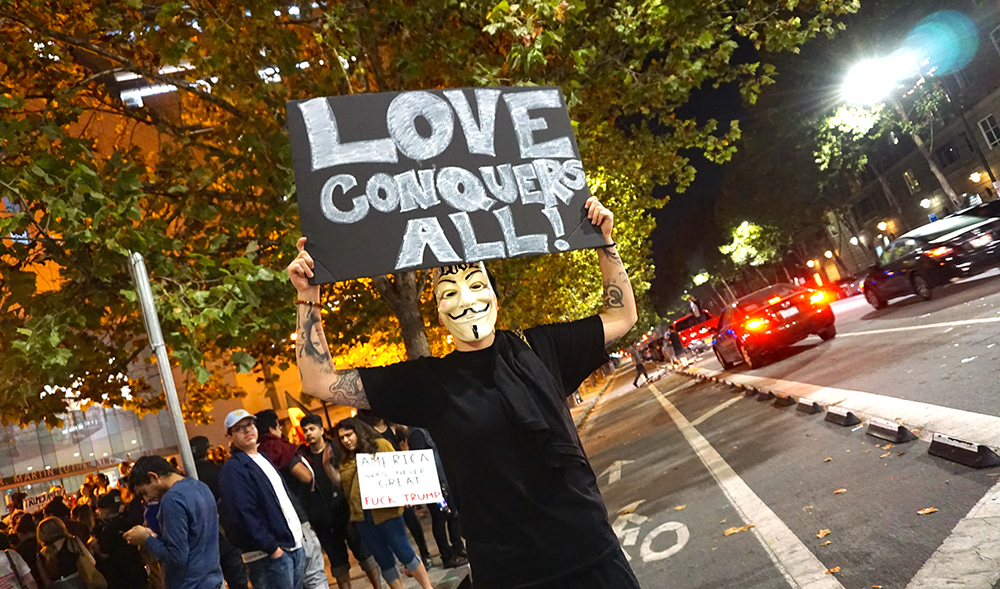 Sylvia Arenas, an East Side school trustee and candidate for San Jose City Council, said her son asked her on Wednesday if he would get arrested if he went to Mexico.

“I told him, ‘No, absolutely not,’” Arenas said. “’As long as you don’t do anything wrong, you are safe.’ Apparently someone at the school told him to go back to Mexico and some other comments. My son was scared.”

Hate crimes are typically defined as an act that injures not only the immediate victim, but also the community they’re perceived to represent. Harris said that police agencies throughout the state have seen an uptick in threats of hate crimes and violent extremism.

According to a state Justice Department report, hate crimes surged by more than 10 percent from 2014 to last year. Most of that increase stems from crimes motivated by religious bias, the report found. The second-most common hate crime involves bias against the victim’s sexual orientation.

Though Trump hasn’t disparaged LGBTQ people the way he has non-white ethnic groups and women, he surrounds himself with people who have. His running mate, Mike Pence, called homosexuality a personal choice, and one that will hasten “societal collapse.” Pence opposed the repeal of the military’s “Don’t Ask, Don’t Tell” policy that forced non-straights to stay in the closet. He also decried President Barack Obama’s directive on transgender bathrooms.

“I haven’t really slept since Hillary [Clinton] conceded,” 50-year-old Gilroy resident Vicki Lucas said. “It’s scary. Because number one, I’m a woman. But I’m also a lesbian, and it’s frightening the way [Trump] degrades everybody and the way he surrounds himself with extreme right-wing Christians.”

That fear seems to be reverberating in the in the LGBTQ community following Trump’s Electoral College win. There’s a sense that the Trump administration will reverse some of the advances made toward greater equality.

The Billy DeFrank LGBT Community Center in San Jose will host a post-election meeting tonight to talk about how to continue advocating for equal rights under an administration adversarial to the cause.

Organizers of Thursday’s anti-Trump march in San Jose will assemble for another rally this afternoon. Activists created a Twitter account, @NotMyPresSV, and a website for people to get involved.

Similar protests have been taking place throughout the U.S. In Oakland, the turnout has numbered in the thousands—up to 7,000 at one point, according to news reports. In one of his first Twitter updates since the election, Trump dismissed the demonstrations as being led by “professional protesters, incited by the media. Very unfair!”

All photos by Greg Ramar.

This protester was a very good boy.

Some protesters concealed their identities but the demonstration remained peaceful.

The LGBTQ community has expressed concerns that a Donald Trump administration will try and repeal their rights.

California was one of several states to overwhelmingly support Hillary Clinton for president.

Donald Trump’s divisive campaign rhetoric has people wondering what he will do in office.

This man in an anonymous mask carried a message of love.

Tensions have been running high since Donald Trump won the presidential election.

This man was one of many people marching down Santa Clara Street.

The public art project under the Highway 87 overpass added a little light to protest.

Donald Trump received an endorsement from the Ku Klux Klan.

This protester raised a fist in solidarity with the anti-Donald Trump movement.

People marched through downtown San Jose on Thursday night to protest this week’s election of Donald Trump as president of the United States. (Photo by Greg Ramar)