When police arrested the 13-year-old for stealing two T-shirts at Macy’s, her mom was still working night shifts to take care of her five surviving siblings. Rather than bring Nowlan home, the single mother of six relinquished her to the system.

Over the next five years as a ward of the court, Nowlan went to jail 17 more times for probation violations—but never for another offense. She spent most of her teenage years either locked up, in a group home or on the run.

Nowlan is hardly an outlier. Despite a nationwide decline in juvenile arrests over the past two decades, the incarceration of girls—until recently—trended in the opposite direction. 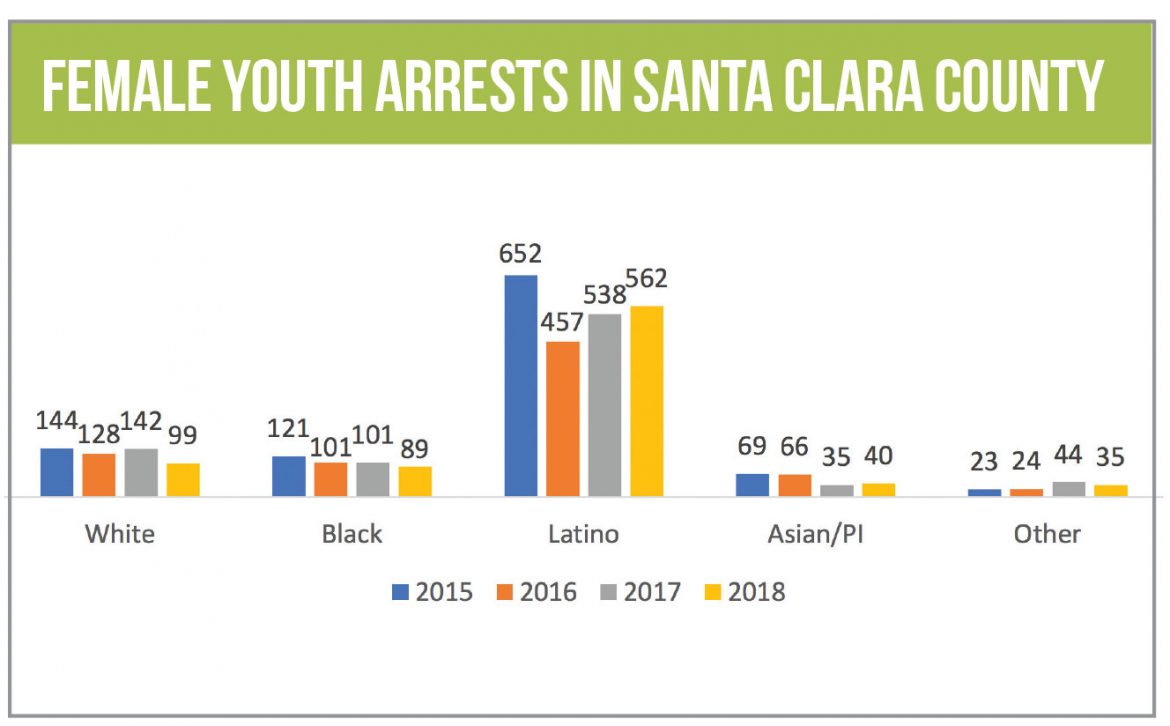 In a bid to combat the troubling trend, local leaders pledged to end girls’ incarceration in Santa Clara County. To that end, they celebrated the grand opening of the Young Women’s Freedom Center (YWFC), which aims to end incarceration for lesbian, gay, bisexual, trans and gender nonconforming girls in the South Bay and across California.

Though arrests and citations of juveniles fell by almost 35 percent from 2014 to 2018, lawmakers and advocacy groups say more needs to be done. Last year, 805 girls in this county were arrested and 268 admitted to juvenile detention. Given that the vast majority of kids who end up in the criminal justice system endured some kind of trauma, county officials say they want to take a more rehabilitative approach—to give them another chance. Like Nowlan had.

Nowlan says she found new hope in juvenile hall 25 years ago when she met a visiting law school student, who advised her to get a high school equivalency diploma ahead of her 17th birthday. That GED became a ticket out of the system.

Nowlan went on to find work at a women’s advocacy center in San Francisco, where she rose through the ranks. In 2016, she was appointed executive director of the YWFC.

YWFC is now expanding in the South Bay, where it partnered with county probation, the Office of Women’s Policy and the nonprofit Vera Institute of Justice.

In April, YWFC began working with 30 local teens and young adults, hosting weekly circles and providing them with life coaches. The group also implemented a six-month internship, offering girls in the system leadership opportunities to mentor their peers.

Judge Katherine Lucero, who presides over the juvenile justice court in Santa Clara County, says her division has been actively working to divert young people from trials.

“We really are committed to not having a youth get any further entrenched in [the] systems than absolutely necessary,” she says. “For example, other counties may prosecute misdemeanors. Their probation may take a misdemeanor case to the DA. Our county in very rare instances does that—they do that for drunk driving.”

Instead, the court directs most teens with misdemeanors to probation. The court also diverts most juveniles with felonies to the Deferred Entry of Judgment, where their crimes can be reduced to probationary offenses and sealed for life.

Meanwhile, the county will continue to grapple with new challenges as the nature of juvenile crimes changes.

According to a report by the local Juvenile Justice Court, younger kids are committing more crimes and more serious offenses. As a result, the populations are increasing in San Jose’s Juvenile Hall and William F. James Ranch in Morgan Hill. To cope with the influx of juveniles, the county received a $3.1 million grant to provide counseling, re-entry and early-intervention services at James Ranch.

On the state level, lawmakers have been passing a series of juvenile justice reforms. Since SB 1391 went into effect this year, courts can no longer try a defendant under 16 years old in an adult court—though at least 10 counties are challenging the law. SB 439 prohibits juvenile courts from prosecuting a child under 12 years old (3 percent of youth arrested in this county last year were 12 or younger). SB 384, which goes into effect next year, will allow kids sentenced of sex crimes to avoid lifetime offender registration by reducing the term to a minimum of five or 10 years.

Now, she has her whole future ahead of her, and wants to bring others like her up and out of a system that can be so hard to escape.