By the time he turned 32, Pablo Gaxiola had spent nearly half his life behind steel doors in concrete cells. Fifteen years lost to incarceration. His daughters were growing up without their dad. Relationships with family and friends had grown tenuous—strained by prolonged absences with few visits and brief phone calls.

“I got sick of it,” Gaxiola says. “I realized that there was so much going on in the world and I was missing out.”

Leading up to his release in 2009, Gaxiola passed his time in solitary confinement by reading newspapers and books cover to cover. Attuned to the outside world, he says, he became more conscious about the system that confined him. When inmates went on a hunger strike to demand more visitation rights, Gaxiola refused meals in solidarity.

“I never thought before about how I could make an impact,” he says. “But that time, I made a plan for myself for when I came home.”

Seven years ago, the San Jose native regained his freedom. But this time he kept it by sticking to his own plan: enrolling in school, finding work, becoming a peer mentor and advocate for inmates and the formerly incarcerated.

In June, Gaxiola’s civic involvement led him to the voting booth for the primary election. He marked the occasion with a Facebook post: “Because I can … #Strive #RazaVote.”

“It felt like another step in my growth,” says Gaxiola, 39, who put an oval “I voted” sticker on his hand and another on his car window. “I had earned the right to vote again.”

Last month, California hit a record of more than 18.2 million registered voters, with a surge of 370,000 during the last stretch of September. That means 75 percent of the state’s eligible voters are ready to cast a ballot—the highest rate in a presidential election year since 1996. “This is a major milestone,” California Secretary of State Alex Padilla said in announcing the tally.

Among the burgeoning electorate are ex-cons like Gaxiola, as well as a growing number of people still behind bars. This includes 500 misdemeanor convicts and pretrial detainees in Santa Clara County. That’s about 14 percent of the average daily population at San Jose’s Main Jail and the Elmwood Correctional Facility combined. But recent civil rights litigation and brand-new state legislation—part of a nationwide push to reverse decades of felon disenfranchisement—stand to drive that figure up in the future.

In California, state prisoners cannot vote until they serve their time. Not so for people in local jails, where the rules on suffrage became somewhat ambiguous after statewide reforms pushed thousands of inmates from state to county custody in 2011. A 2014 lawsuit filed by the American Civil Liberties Union (ACLU) on behalf of inmates, argued that the state shouldn’t impose prison restriction on felons in county corrections.

In 2015, the state Supreme Court ruled in the ACLU’s favor and restored voting rights to 60,000 low-level felons under community supervision—a sentence served outside jail but under the watchful eye of probation officers. On Sept. 28, despite protests from law enforcement, Gov. Jerry Brown codified that court ruling by signing Assembly Bill 2466. The new law clarifies that felons in county custody—inside jail or released on supervision—retain the right to vote.

“Having a criminal history doesn’t mean you don’t get to participate in this democracy,” ACLU attorney Lori Shellenberger says. “In California, at least, almost everyone with a criminal record can vote.”

When she introduced AB 2466, Assemblywoman Shirley Weber (D-San Diego) pitched it as a tool to curb recidivism and a way for California to set an example as other states claw back voting rights. Shellenberger, head of the ACLU’s Voting Rights Project in California, considers the bill a step toward ending the legacy of Jim Crow-era voter suppression.

“The motive behind voting restrictions, for generations now, has been to silence entire communities,” she says.

Black, Latino and Asian-American men account for three-quarters of the California prison population. That makes the state’s felon disenfranchisement laws fall disproportionately on communities of color. African Americans, who represent only 7 percent of the state’s voting-age population, comprise 28 percent of those stripped of their voting rights by way of a prison sentence.

Disenfranchisement as a penalty for serious crimes dates back to the classical Greek notion of “civil death,” which voided citizenship rights for people who broke the social contract. The concept wove its way into English law and the American colonies, where it was reserved for a small number of felonies. When the 15th Amendment brought African Americans into the electorate during the post-Civil War reconstruction, however, states trying to preserve institutionalized white supremacy vastly expanded the range of crimes punishable by incarceration and, by extension, civil death.

A century later, as the Civil Rights movement expanded voting access in several states, the number of convicts excluded from the electorate fell from 1.8 million to 1.2 million between 1960 and 1976. But the explosion of incarceration in the decades since brought the population of disenfranchised voters to 3.3 million in 1996, 4.7 million in 2000 and 5.9 million in 2010. 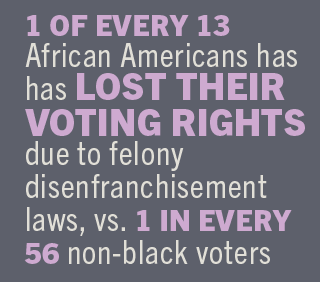 Today, a record 6.1 million Americans have been blocked from casting a ballot because of a felony conviction, according to a study released last week by the nonprofit Sentencing Project. About 75 percent of them aren’t even imprisoned, and about half have already completed their sentence. Felon disenfranchisement laws range in severity by state.

Only in Maine and Vermont—not coincidentally two of the whitest states in the union—have felons never been denied the right to vote. Meanwhile, one in 13 black Americans nationwide have lost this right, according to the Sentencing Project. By contrast, one in 56 non-black voters are barred from voting.

“By and large, laws get made by people who aren’t directly impacted by them,” says Endria Richardson, policy director of the Bay Area-based Legal Services for Prisoners with Children. “Expanding people’s access to voting is a first step towards changing that. It’s a first step towards re-enfranchising a population of people who have been pretty much removed from civic participation, whether through repeated police contacts, feelings of disempowerment or systemic exclusion.”

That the population bearing the brunt of disenfranchisement is black and brown certainly politicizes the issue, according to reform advocates. Because ethnic minorities are viewed as more likely to vote Democratic than Republican, debate about welcoming convicts back into the electorate largely hews to partisan lines. According to data from the National Conference of State Legislators, bills that would make it easier for felons to vote almost invariably die in Republican-controlled legislatures.

There’s a dearth of research on voting patterns among convicts, but a survey of Los Angeles County inmates in 2012 found that nearly half of the 1,300 voting inmates registered Republican. In the U.S. territory of Puerto Rico, 6,195 inmates voted in the March 2016 Republican primary, where they made up one-sixth of the island’s overall turnout. It’s unclear how Santa Clara County’s 500 registered-to-vote inmates break down by party affiliation.

“We just don’t keep stats on that,” says Anita Torres, spokeswoman for the county’s Registrar of Voters. “That would be really interesting to know.”

Sheriff’s Office spokesman Deputy Reginald Cooks says the jails keep a running list of all inmates who register to vote. In the June primary election, 215 male inmates from the Main Jail cast a ballot along with 210 men and 78 women from Elmwood.

Inmate advocates say that growing the carceral electorate in this county has taken on a great urgency in the wake of an inmate’s fatal beating by three jail guards last year. Michael Tyree’s Aug. 27, 2015, death—which led prosecutors to file murder charges against correctional officers Jereh Lubrin, Rafael Rodriquez and Matthew Farris—prompted a slew of reform proposals. Many of those have yet to go into effect, including a call for independent oversight.

But the conversation about how to overhaul the county’s beleaguered jails has inspired more inmates and ex-offenders to become politically engaged. Gaxiola, for his part, served on a “blue ribbon” commission formed in the wake of Tyree’s death to take a critical look at county corrections. It’s in everyone’s best interest to welcome inmates back into the community. After all, most offenders—95 percent, according to the U.S. Bureau of Justice Statistics—will eventually walk free.

“That’s the reality,” he says. “If you want them to re-enter society successfully, you have to make them a part of it. Life isn’t over when you become an offender.”