The late-night drinking, drugging and open-air gym sessions at Communications Hill may soon come to an end. Or at least ease up a little.

Gov. Jerry Brown on Monday signed off on a law that empowers San Jose to enact a curfew on the hillside staircase.

Senate Bill 236, authored by Sen. Jim Beall (D-San Jose), allows the city to monitor the stairs as they would a public park. Until now, the walkway has been designated under the state vehicle code as a sidewalk, which are legally open to traffic 24-7.

Social media and word of mouth turned the south San Jose stairways into a destination for people all around the Bay Area. Problem was: the stairs were never designed as a public park.

Visitors overwhelmed the neighborhood, taking up all the street parking, trampling public landscaping and littering. The most shameless reportedly had sex in the open, to residents’ dismay.

Exasperated neighbors called on local leaders to help deal with the crowd, but there was only so much the city could do. So they appealed to state lawmakers, who advanced this special bill allowing the city to change the public service easement.

“The goal of the bill was to protect the families who live on the hill,” Beall explained. “Those households needed help and the city’s hands were handcuffed by a statute that prevented them from taking effective action.”

Beall introduced the bill in February after hearing an appeal from city leaders about the issues that had plagued the stairs for the past five years.

“I’m grateful to Sen. Beall for his leadership on SB 236,"Mayor Sam Liccardo said in a statement, "which will allow the city local control to successfully operate the staircase to the benefit of both the community and those who use the facility."

Jeremy Jones, president of the neighborhood's Tuscany Homeowner's Association, said the new law comes as a huge relief to residents.

"Over the last five years we have watched the grand staircase go from a peaceful amenity for residents to a Bay Area tourist attraction, which is not what [it] was ever designed to be nor has the infrastructure to support," he told San Jose Inside. "Because of this, residents deal with all types of issues such as litter, graffiti, parking, drugs, and noise disturbances. We look forward to the implementation of this curfew and hope it will bring the relief residents are asking for."

UPDATE: The city sent out the following notice on Oct. 6, indicating that staff will bring a proposal to vacate the easement in January. 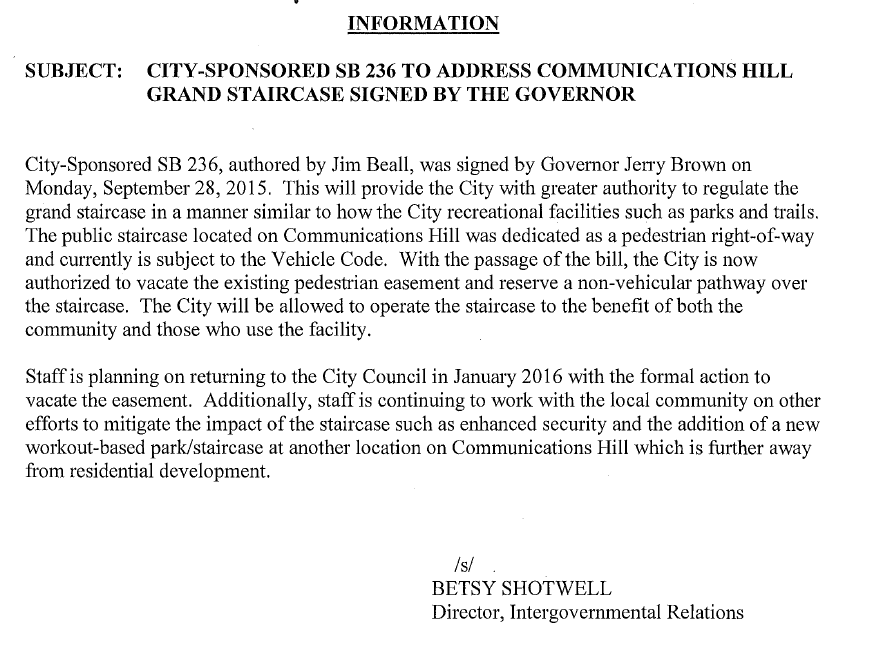