California public health officials announced today that Santa Clara County has been bumped up to a less restrictive reopening plan—also referred to as the red tier—as part of its statewide Covid-19 framework. That means that some businesses will now be able to resume indoor operations at a limited capacity.

Gov. Gavin Newsom unveiled the new four-tiered system last week, which replaced the state’s Covid-19 watch list. Under the updated guidelines, counties are assigned to the four tiers—purple, red, orange and yellow—based on the number of Covid-19 cases per 100,000 residents and the positivity rate.

Under the red tier, personal-care services such as nail salons, barber shops and other businesses along those lines, can resume indoor operations in Santa Clara County as long as they follow the requirements set out under the county’s risk-reduction order.

Gyms and fitness centers will also be able to resume indoor operations at 10 percent capacity, while  indoor museums, zoos and aquariums can reopen at 25 percent capacity.

Shopping malls, which recently reopened, will be able to increase capacity from 25 percent to 50 percent. Lastly, if Santa Clara County remains in the red tier for the next 14 days, then schools can reopen as well.

There are a few sectors that the state allows under the red tier that won’t be allowed under the county’s stricter health order. Those include indoor dining, indoor gatherings and indoor movie theatres.

Santa Clara County Counsel James Williams said that the decision has to do with three “core uniform principles” that local health officials set out in early July. The three principles are that it’s safer outdoors than indoors, face coverings should be worn indoors and social distancing should be maintained in order to prevent super spreader events.

“Those core principles are what have the effect under the risk reduction order keeping indoor dining, which would inherently require removing a face covering, closed,” he said. “It’s the same core principle that applies to the prohibition on indoor gatherings and indoor movie theaters. And especially in the context of the significant volume of activity that opening schools may bring, it’s all the more important that we remain vigilant and on top of trying to keep the case counts here locally as low as possible.”

As of today, Santa Clara County has reported 18,717 cases and 260 deaths from Covid-19. The county has conducted more than 654,000 tests in the last six months and the current seven-day average testing positivity rate is 3.23 percent—which is down from over 4 percent in early August. 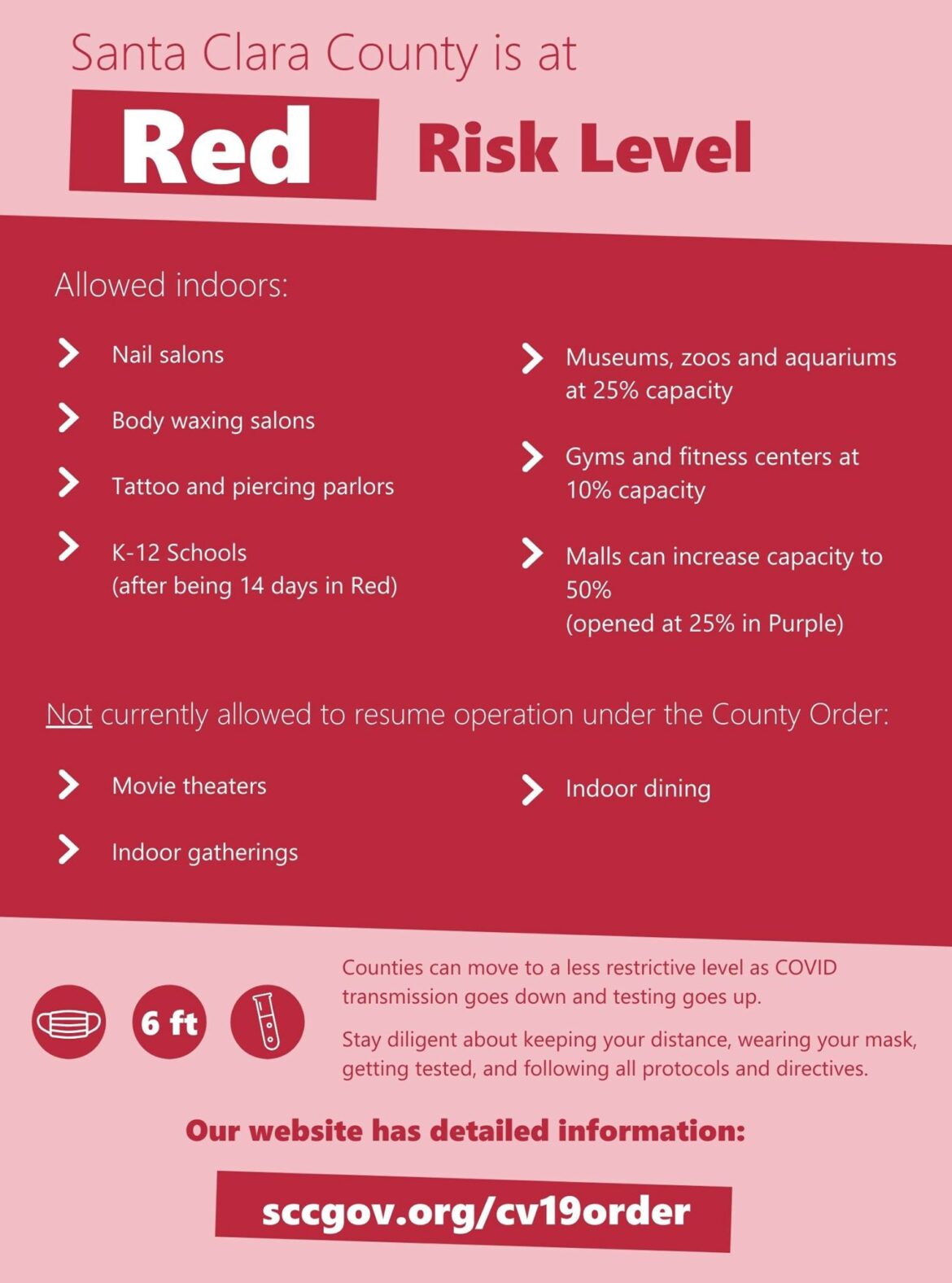 An explainer on the red-tier guidelines. (Source: Santa Clara County)