Lydia Jungkind began working for Dominic Caserta’s campaign for Santa Clara County supervisor because he promised her a glowing reference if she helped him win.

The 19-year-old German exchange student welcomed the opportunity to work alongside the Santa Clara councilman. Caserta, 43, a veteran high school civics instructor who met Jungkind through his side job teaching political science at Footill College, offered her a paid gig as field director.

But she quickly learned to dread going to work at the campaign headquarters, which is at his house. It wasn’t just Caserta’s flirtatious comments about her appearance, about how sexy she looked, she says. It was also the kisses on the cheeks. The hugs.

She says he walked around with only a bath towel around his waist on several occasions. Sources say he offered her a Corona and a shot of vodka, which she refused, at a recent barbecue fundraiser for his campaign and that he repeatedly promised a cocaine-and-booze-fueled celebration if he won the race to replace District 4 Supervisor Ken Yeager.

When Caserta offered to drive Jungkind the half-mile to the bus stop in his Mercedes-Benz GLK SUV one day earlier this year, she says he placed his hand on her thigh and told her that it’s hard for him to resist the urge to kiss her.

“He also told me that German cars, like German girls, are the best,” Jungkind says. 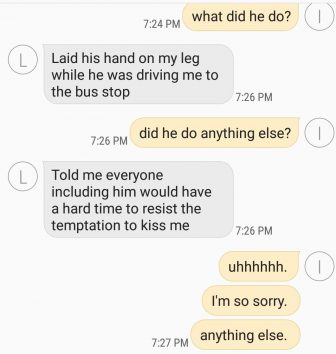 Texts Jungkind sent to a Crueldad earlier this year after Caserta allegedly touched her inappropriately in his car.

One time, he called Jungkind into his bedroom, where she says he lay under the covers with no shirt on. Another day, Caserta called her to his young son’s room where the would-be mentor allegedly told her how lovely she looked and kissed her on the cheek.

Jungkind pauses to fight back emotion while recounting that last scene.

“It’s hard just thinking about this,” she says, looking away to maintain her composure. “There were people in the house, but I was intimidated. I felt really small, I guess.”

Having worked as an Oktoberfest waitress in her native Germany, Jungkind says she thought she had a pretty high tolerance for unwelcome advances.

But she says Caserta drove her to her breaking point.

Jungkind’s testimony shared exclusively with San Jose Inside follows similar allegations of misconduct leveled against Caserta by his former campaign manager, Ian Crueldad. Their accounts also come amid revelations of past improprieties by Caserta, who has yet to respond to requests for comment but issued a press release on his campaign website in which he unequivocally denies the allegations.

“They are simply false and made up,” he wrote. “They were investigated thoroughly by the district and I was exonerated.”

According to the school’s own records, however, Caserta was not exonerated. A personnel file that the Santa Clara Unified School District seems to have inadvertently leaked to its entire staff shows that the civics teacher has battled allegations of sexual harassment since he first began working at Santa Clara High in the early 2000s, and that claims against him were sustained. Those records, in addition to accounts from more than 30 sources who spoke to San Jose Inside in the past week, indicate that he repeatedly came under fire for varying degrees of impropriety, from inappropriate touching, to sexually charged comments, angry outbursts and various policy violations.

In 2002, Santa Clara police Officer Brian Allen was twice summoned to Santa Clara High in response to allegations that Caserta sexually harassed students. On May 22 that year, a senior in Caserta’s fourth-period civics class went to administrators with claims that the teacher had given her unwanted hugs, placed his hand on the small of her back and that he had previously run his fingers through her hair, made sexually suggestive comments about her outfits and mentioned having an erection in class.

The girl’s mom wrote a letter to the school about how traumatized her 17-year-old was by Caserta’s actions and words, including comments about her wearing “slut clothing.”

“My daughter has told me that she has had nightmares about the teacher and that he was chasing her, and that it was at the school grounds,” the mother wrote. “She comes home from school crying, and this is a child who loves school. It is my opinion that something must be done. This is not acceptable behavior from a teacher, especially by a male teacher who should know better.” 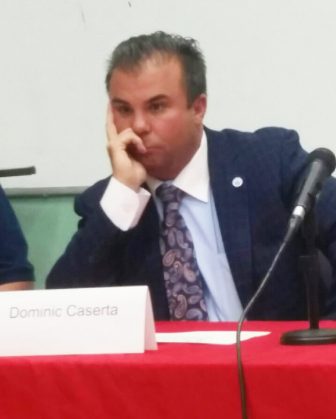 Dominic Caserta at a May 7 candidate forum, right after finding out that San Jose Inside obtained records from his personnel file.

“He dresses us down with his eyes,” one girl said, according to school records and a recollection of the meeting she described this week to San Jose Inside. “He makes comments to us all the time. He thinks we enjoy this, but we don’t.”

The district determined that there was enough evidence to sustain the claim of sexual harassment and told him to restrain himself or risk losing his job or getting sued.

“You are to refrain from personal conversation with people in the workplace about yourself or others that have any sexual connotation,” SCUSD Assistant Superintendent of Human Resources Butch Pastorini told Caserta in a letter dated June 27, 2002. “The district has significant potential liability for any negative conduct that creates a hostile work environment. The district will not tolerate it and will take necessary action to assure that it does not continue. Your behavior and comments seriously affect your students and co-workers. You must be aware of the potential for personal liability if you were sued for sexual harassment.”

Caserta—who emphatically denied the claims in written statements sent to the district—was let off with a stern warning.

Similar allegations surfaced in 2009. On March 18 that year, a student came to Syth to complain about Caserta inappropriately hugging her after class. Syth describes her as “visibly shaken up and crying” while describing the encounter.

The student says she asked Caserta about a test during class, but got shut down when he told her to “quit whining.” He then allegedly demanded that she stay after class.

“I’d rather not,” she reportedly replied.

“No, I need you to stay,” Caserta said while pointing at the floor beside his desk, according to the student’s account.

After the students left class, Caserta asked her what was wrong.

“You’re a bright girl, you’re a beautiful girl,” he allegedly told her.

Then, records describe him saying, “Do you need a hug? Give me a hug.”

School records show that Caserta explained away the situation by saying he noticed that the student had been distraught and that he put his arm around her in a show of sympathy. But the gesture made the student “uncomfortable” enough that the school let her withdraw from his class to avoid further emotional distress.

Other complaints over the years involve policy violations that speak to a lack of  judgment. In 2002, records show that Caserta got in trouble for distributing the Golden State Exam for students to complete over the weekend, which disqualified all of his advanced-placement students from any recognition they might have had from taking the test. Caserta wrote a letter saying he was “deeply sorry” for the misstep.

Years later, in October of 2007, Santa Clara High investigated complaints that Caserta solicited financial help for his council campaign from students and former students. He denied the claims, and said his campaign committee must’ve sent the emails in question and may have obtained the contact information from index cards he collects at the beginning and destroys at the end of each school year asking for students’ names, parents’ names, favorite movies and email addresses.

“That begs the question as to how the campaign committee gained access to them,” then-SCUSD Superintendent Steve Stavis wrote in a warning letter to Caserta.

In a warning letter, Stavis urged Caserta to hold himself to a higher standard.

“In a very real sense, your political life exists within the figurative fishbowl,” Stavis told him in disciplinary records. “It is hoped that an otherwise commendable political career does not become tainted by any improprieties.”

Official records combined with myriad personal accounts paint a picture of a man who struggles to control his impulsivity. 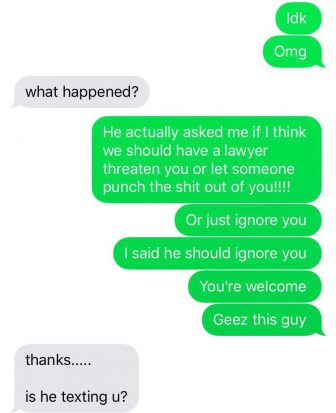 Texts that Jungkind sent to Crueldad last week after a conversation with Caserta.

Several students who took his class in high school described him giving “cute girls” special treatment, giving them extra credit and having them sit at the front of the room. He let some of them drive his car off campus without supervision to pick up smoothies or fast food. Other girls say they were subject to his insults and mean-spirited bullying, either because they rebuffed his advances or because he never found them attractive in the first place.

At least one male campaign volunteer says he quit because of Caserta’s “locker room talk.” And last week, Caserta’s former campaign manager, Ian Crueldad, came to San Jose Inside with allegations that the candidate paraded around half-naked in front of his largely young cohort of volunteers.

Crueldad’s public account emboldened Jungkind to come forward, she says. The two describe a candidate who became uncomfortably unprofessional in their presence. They shared text messages they exchanged over the past few months in which they confide in each other and with friends about alleged misbehavior.

Jungkind says Caserta asked her last week to defend him to San Jose Inside. She declined. She says he then asked her what he should do about Crueldad going to the media with the bath towel story.

“He said, ‘Should we hired a lawyer to threaten him, hire somebody to punch the shit out of him or just ignore him?,’” Jungkind says.

Despite Caserta’s documented history of demeaning women, the candidate holds himself out as a champion of the #MeToo movement. But the allegations prompted his campaign consultant Laura Teutschel to resign Tuesday after Bay Area Women’s March co-organizer Jennie Richardson and Michele Dauber, who leads the campaign to recall Santa Clara County Superior Court Judge Aaron Persky, withdrew their endorsements.

“These allegations are disturbing and deeply disappointing,” Dauber tells San Jose Inside. “I and the rest of the Recall [Perksy] leadership feel personally betrayed. Our hearts go out to the students and young women who made these allegations. ... The point of the recall campaign is to say enough is enough. We need to hold these public officials accountable for misbehavior.”

Syth and Caserta’s attorney, John Mlnarik, have yet to provide comment.

This article has been updated to include a statement from Caserta.