Timelapse footage captured by cameras stationed close to the 4,265-foot summit show just how close the flames came to the historic structure,

“The extent of the fire around our main telescope domes is especially evident in the nighttime photos,” staff wrote in a Facebook post today. “Cal Fire did excellent work protecting the facility and we give they our wholehearted thanks for their efforts.”

Thankfully, because of stay-home orders in place since March, observatory staff were already safely working offsite and controlling the telescopes remotely.

The danger has yet to pass, however.

“Cal Fire is working hard to clear brush around vulnerable structures and further protect the facility,” observatory staff added in a follow-up post.

The wildfire that ran through Lick Observatory and surrounding areas yesterday and last night was captured by HamCam2. The extent of the fire around our main telescope domes is especially evident in the nighttime photos. CalFire did excellent work protecting the facility and we give them our wholehearted thanks for their efforts. The HamCam2 camera is mounted on the top of the Lick Observatory Main Building and points east. The fire reached the observatory grounds in the early afternoon August 19th and continues to affect the observatory and surrounding areas this morning. Time-lapse assembled by Elinor Gates from the saved camera images.

The SCU Complex—a cluster of about 20 fires in five counties and abutting the eastern edge of San Jose—still remains wildly out of control. By the latest measure from Cal Fire, the complex has grown to about 140,000 acres, with just 5 percent containment.

Little to no fire history in the past 50 years left the terrain rife “with decadent fuels,” according to Cal Fire, rendering it particularly vulnerable to Sunday’s lightning-sparked flames, which have since engulfed 300,000 acres throughout the region.

In a video posted to Twitter today, Cal Fire captain and fire behavior analyst Stephen Volmer said crews are struggling to rein in the SCU Complex because of its speed, the hot dry weather and gusts of 30mph wind on the upper ridges.

“Normally during the nighttime, the relative humidity goes up and the fire spread slows down,” he explained. “But in this incident, there’s a little phenomenon that’s happening and the relative humidity is actually dropping drastically at night when there’s very poor humidity recovery, and that’s allowing the fire to burn actively all day and all night long out there. That’s really hampering the control efforts of our resources on the ground.”

East of San Jose, Volmer said, the flames continue to travel at about 120 feet a minute—far too fast for the 21 crews assigned to the complex to lay down fire lines. Meanwhile, he added, embers from freshly burned kindling are floating about three-quarters of a mile through the air—called a “spotting distance”—and sparking still more fires.

“So that’s what’s hampering our control efforts out there, Volmer said in his video broadcast. “That’s what’s aiding in the fire spread.”

More than 1,000 firefighters from multiple agencies continue to scout for safe access points to build direct and indirect fire lines along the way.

In its latest status update on the SCU Complex, Cal Fire said the wildfire still needs “critical resources to protect sensitive wildlife and the critical power and communication infrastructure throughout the area.”

Mandatory evacuation orders remain in effect for the Mt. Hamilton foothills, with an advisory issued for San Jose’s East Side. The city made the a map of impacted areas, with the expanse highlighted in red subject to the mandatory order.

Santa Clara County has set up two resource centers—one at the Milpitas Library, another at Ann Sobrato High in Morgan Hill—for evacuees to find help. The centers are not shelters, but are staffed by American Red Cross and can help people find out where to stay until it’s safe to return home.

In Milpitas today, the resource hub appeared to have very little foot traffic. A Red Cross employees declined to say how many people had availed themselves of services there, directing inquiries instead to the county’s Emergency Operations Center (EOC). 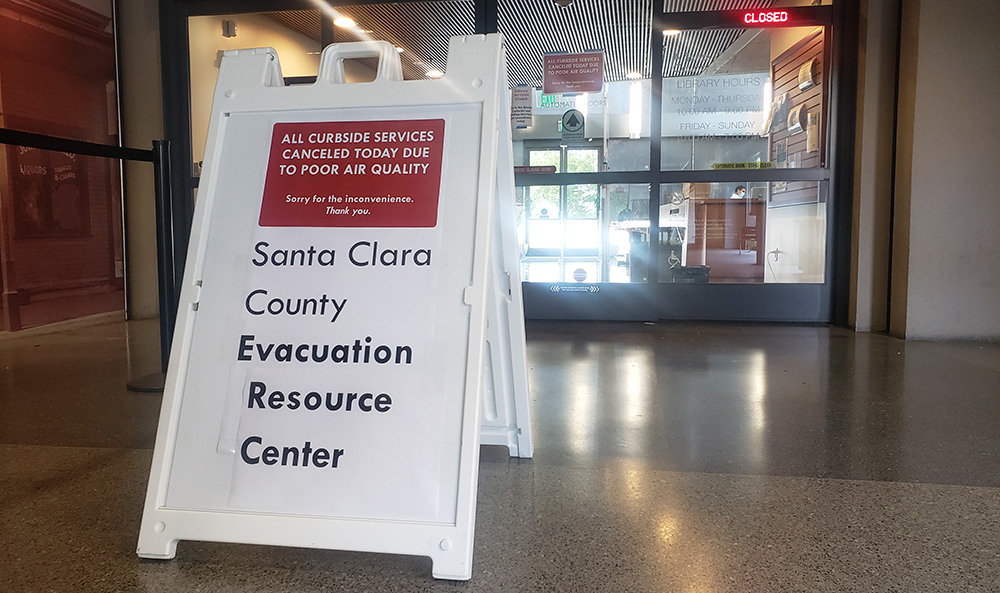 A spokesman at the EOC didn’t have info readily available about the number of evacuees affected by the local order nor how many sought help at the resource hubs. San Jose Inside will update this story as more information becomes available.

Meanwhile, follow Cal Fire on Twitter—@calfireSCU—for the latest updates. Click here for their map, which is updated in real time and shows various fire locations and boundaries of current evacuation orders.

Though the SCU Complex poses the most immediate threat to San Jose, the Santa Clara Valley is surrounded by fire. West of Los Gatos and Saratoga, the CZU Complex has been roaring through the Santa Cruz Mountain forests and up along the Peninsula, where additional evacuation orders have been issued as the fires approach Big Basin State Park.

For the latest updates on the CZU Complex in Santa Cruz and San Mateo counties, follow Cal Fire’s designated Twitter account for the area at @CALFIRECZU. Or, bookmark this live blog by San Jose Inside sister publication Santa Cruz Good Times.