In 1976, budget shortfalls halted construction on the interchange connecting Highway 101 to interstates 280 and 680. The 200-foot ramp suspended mid-air became known as the “Monument to Nowhere.”

San Jose Councilman Joe Colla got so fed up with the stalled project that he staged an elaborate photo shoot. He talked a crane operator into lifting a 1960 Chevy Impala to the edge of the unfinished ramp before daybreak and then convinced a helicopter pilot to drop him off right next to it.

In the now-famous image, Colla stands with outstretched arms over the caption, “Where Do We Go from Here?” 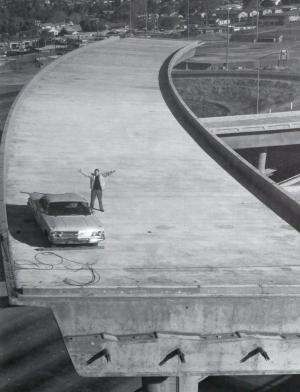 Driving the point home, Colla later led a caravan of hundreds of cars to the California capitol to lobby for the roadway’s completion. The publicity stunts paid off. Today, hundreds of thousands of people each day traffic the interchange.

Signs bearing his name will be placed along the freeways to mark the designation. A ceremony will be held at 2pm Friday at the Center for Training and Careers, 749 Story Rd., in San Jose.

County Supervisor Dave Cortese led the years-long campaign to name the interchange after Colla, who died in 1995 at the age of 75.