Santa Clara County jails have seen a sharp uptick in assaults over the past few years, partly because of state prison reforms that pushed more dangerous inmates to local correctional facilities.

It’s a trend playing out across California following the 2011 passage of AB109, a public safety realignment that sought to give more control to local agencies and to ease prison overcrowding by reassigning more inmates to county jails.

Gang-tie assaults, which accounted for half the total number of fights in the county rose 281 percent from 2011 to 2013—that’s from 16 to 61, according to a report forwarded this week to the Public Safety and Justice Committee. Some of that increase comes from stricter enforcement as the Sheriff’s Office refers more cases for investigation and prosecution.

“However, after analyzing the crime reports we believe that the data still suggest assaults between inmates are becoming more serious and frequent,” Sheriff Laurie Smith states in the report compiled from 230 hours of staff analysis.

Inmate-versus-staff assaults rose 20 percent with the rise in population since 2011, when the state enacted its AB109 prison reforms and bumped up the collective population at the main jail in San Jose and Elmwood in Milpitas from 3,500 to more than 4,000. But AB109 inmates weren’t as much to blame for the heightened violence as much as the overall crowding, Smith says. Most inmates caught for assault against staff were local inmates without gang ties.

“Assaults have been on the rise since 2011 and have risen commensurate with the rise in population,” the sheriff says. “While AB109 can be credited as the biggest reason in the population rise, it does not appear that the AB109 population or the gang-tie population as individuals is directly responsible.”

The population increases and growing challenges associated with classifying and and housing the larger number of gang-affiliated inmates—including some who formerly might have been sent to prison—put unprecedented pressure on the local system, the report continues.

“This population creates an increase in housing moves, less opportunity for out-of-cell time and sun deck time,” Smith says. “When you take into account the aging facilities and the frequent problems with plumbing, door locks, and the impact on visiting due to security concerns it is easy to understand that tensions may rise among the jail population as a whole, leading to more assaults.”

Part of the problem, too, with local jails housing a greater number of sophisticated criminals, is that inmates are less likely to cooperate with investigators after an assault, jail guards have said. The report found that victims and witnesses in about 62 percent of total violent gang-related attacks between 2010 and last year refused to talk, which hinders an investigation.

“It’s part of that no-snitch culture,” says one jail guard, who didn’t his name used. “You have more career criminals in here, so the other inmates are scared of the consequences of ratting them out.”

The report echoes that observation.

“The reasons why a victim may decline prosecution with a case vary,” it states. “In some instances, the victim may believe they can handle the situation within the context of the street gang culture. Other times, there may be concerns by the victim about further repercussions for cooperating. In any situation, a lack of … cooperation may impact the ability to prosecute these violent crimes as gang crimes.”

Here's a chart that shows the jump in the number of gang-related assaults. PC 186.22 is a law that allows prosecutors to tack on enhancements for gang activity. 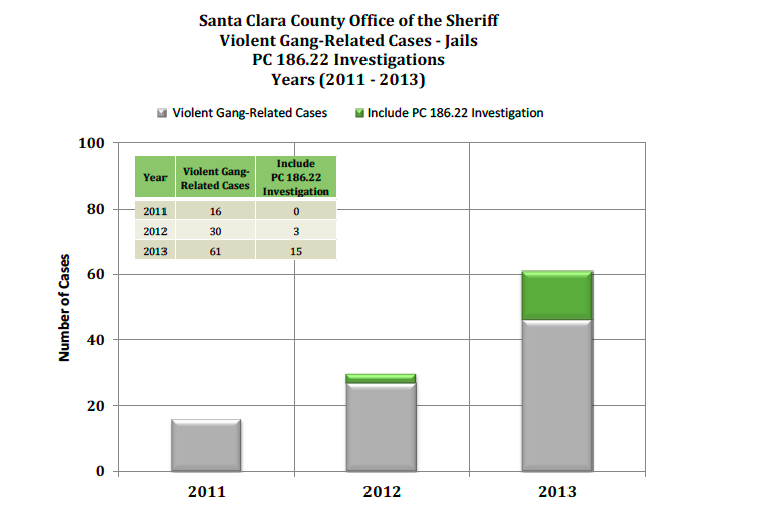