These days, Brandon Coleman has exactly one thing on his mind:

“Trying to influence the music industry to produce more original music instead of just the status quo,” says the keyboardist/vocalist/arranger.

If anyone could do it, Coleman just might be the guy. Over the past decade and change, the man sometimes known as “Professor Boogie” has collaborated with many of the most influential musicians of our era, contributing piano, keys, or arrangements to works by Donald Glover/Childish Gambino, Flying Lotus, Kamasi Washington and Thundercat (among others), as well as working as writing partner with R&B powerhouse Babyface. In 2018, he released his first solo album, the bold, conscious and interdimensionally funky Resistance, via Flying Lotus’s Brainfeeder label.

This weekend, Coleman and band make a stop downtown for San Jose Jazz’s Summer Fest. His appearance comes at a busy time in the already busy musician’s career. On top of planning and prepping for tour and his normal work writing arrangements, he’s recently started a record label, a production company and even begun producing a TV show—all while working on his second solo album.

“I feel like the music I’m doing now is just along the lines of my life,” he says. “It’s an amalgam of all of my thoughts, and all of the records that have influenced me.” 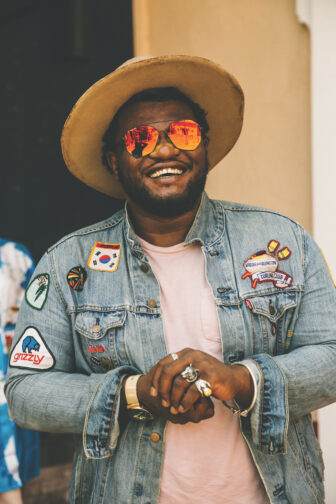 Brandon Coleman poses for a portrait. Photo courtesy of Coleman

Already, Resistance was quite an amalgam. Mixing jazz, disco, R&B, hip hop and film scores, and running them all through a funky, space-age filter, the expansive album fit in few boxes. Even its recording was unorthodox: Coleman recorded Resistance over the span of about six years, taking advantage of unused hours from sessions with his many collaborators. If you hear flecks of stardust on the P-Funk-via-J-Dilla thump of “Giant Feelings,” or feel transported to an interplanetary current on the title track, possibly that’s because both were recorded during the same session as Kamasi Washington’s galactic modern jazz goliath The Epic.

“I’d record in different studios, for different projects, and just be like, ‘I like this song, I’ll tuck it away,’” Coleman recalls.
So when Flying Lotus asked him about doing a solo record, the two sat down and started combing through all the songs he’d put together. Right away, the visionary producer started gravitating towards one thing.

“He really wanted to stick with the funky stuff,” Coleman remembers. “Once I got an idea of what the record label wanted, I pieced together songs based on that. I found all the funky stuff on my hard drive.”

Resistance is certainly funky. After a cinematic swell of strings that rises like leaves in a gentle updraft, the beat kicks in on a thick groove, setting the stage for Coleman to let loose a statement of purpose: “I’m in it for the rest of my life.” From that point on, Resistance is all swagger and float, picking up confidence with each unexpected influence brought in, from filmic woodwind flares, to interstellar disco strings.

One major component of the record is Coleman’s consistent use of vocoder, the roboticizing vocal effect originally pioneered for espionage. Vocoder appears on nearly all of Coleman’s vocal tracks on the album, sometimes in subtle ways—as on the smooth falsetto from “There’s No Turning Back”—sometimes in ways impossible to overlook, as on the melody from retro-futurist robo-sex jam “Sexy.” At all times, it is an undeniable part of Resistance.

But just as any revolution must first begin within, Coleman won’t be repeating himself while fighting for a more original music industry. He vows his next record will be bound neither by funk, nor any other genre.

“The stuff that I’m writing now is more unapologetic: I don’t really care about other people’s thoughts about my music anymore. I’ve just let that go completely. And because of that, it’s opened up a new door to wherever I can go,” he says. “The Black diaspora is so much more than just making people dance. I’m just using my creativity to help expand the diaspora.”