The go-fer for Christian West, founder and former CEO of security firm AS Solution, admitted to hatching the plan in the wake of the 2018 shooting on YouTube’s Mountain View campus. Without Nielsen, five other people wouldn’t have been suckered into a nexus of career-damaging felony indictments.

“A lot of the things changed in Silicon Valley after the YouTube shooting,” Nielsen would later testify about the impetus for the plot, according to court records obtained by San Jose Inside. “There was a shooting on the campus of Youtube—that was what we call the 9/11 of Silicon Valley, where a lot of the clients started to want to have armed personnel.” 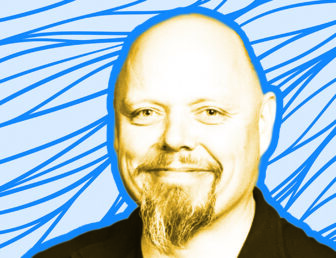 Christian West, the former CEO of AS Solution, faces felony charges in a bribery scandal in which he claims limited involvement. (Illustration by Kathy Manlapaz)

With hidden-gun permits notoriously hard to come by in Santa Clara County—where Sheriff Laurie Smith alone has the power to grant them—Nielsen began working his way into her political network.

Through a friend, The Gun Co. CEO Michael Nichols, he met attorneys Harpaul Nahal and Christopher Schumb, who eventually introduced him to Capt. James Jensen.

From the outset, Nielsen signaled a willingness to make a large donation to boost his odds of securing the permits.

Just weeks ahead of the fall 2018 election—after about six months marked by luncheons, fundraisers and meet-and-greets—he finally wrote a $45,000 check to a pro-Smith independent expenditure committee co-managed by Schumb. He later admitted to being under the impression that it would pay off in a material way.

And when Capt. Jensen allegedly told him to falsify petitions for concealed-carry licensing, Nielsen admitted to doing that too.

Yet Nielsen seems to have dodged a bullet.

The self-professed protagonist in the alleged bribery scheme is conspicuously absent from the indictment that came on the heels of an 18-month probe sparked by San Jose Inside’s inquiry into the eye-popping political contribution.

AS Solution employees who fibbed on their permit applications under penalty of perjury also escaped prosecution—at least so far.

Instead, it’s West who faces felony counts with Schumb, Nahal, Jensen and Nichols.

Among Nielsen’s colleagues is Jack Stromgen, a former AS Solution manager whose LinkedIn profile says he began working as Facebook’s head of protective services in June 2020. Stromgen testified that Nielsen directed him to commit perjury. (Committing perjury and asking someone to do it are both distinct felonies in California.)

Rachael Paskvan, another former AS Solution bodyguard who appears to have committed perjury with her paperwork, left West’s employ in September 2019, just as the District Attorney’s Office began serving search warrants in connection to the suspected pay-for-play put-up job. According to her LinkedIn page, she now serves as “manager of global protective services” at the social media giant.

Because California sheriffs can only issue the permits to residents of their own jurisdictions, Taunton tailored his application for Santa Clara County by listing a home address of “516 Jackson Drive, Palo Alto,” which lies about two blocks away from Mark Zuckerberg’s primary residence. As he would later testify, however, Taunton actually lived farther up the Peninsula in Redwood City.

Stromgen, though he lived in the East Bay, listed a Santana Row address. Paskvan lived in San Francisco and Lawrence in Dublin, though both listed Palo Alto addresses as well.

Despite Nielsen providing what prosecutors described as shifting and contradictory statements, the AS Solution manager accused of initiating the alleged bribery conspiracy may get off with a light penalty. DA Jeff Rosen wouldn’t have a case without him.

Though Rosen and the prosecutors assigned to the case say they expect more charges against more defendants, they’ve kept quiet about who’s in their crosshairs.

“We’re not going to comment on people who aren’t already charged,” John Chase, the DA’s lead prosecutor in the case, says. “We already said that we haven’t finished filing charges in the investigation. So it could just be a matter of waiting and seeing.”

Nielsen told grand jurors he’s had conversations with Chase about a reduced penalty in exchange for implicating the others. “I could still be facing some sort of charge, possible (sic) a misdemeanor,” he said, according to the transcript.

Through a spokeswoman, AS Solution declined to say much about the case, except that West no longer works for the company and that the firm has “cooperated fully” with the DA. Executive Vice President Brian Jantzen, who succeeded West at the helm of AS Solution, has been trying to repair the company’s image.

“We plan to move forward,” he tells San Jose Inside, “committed to the highest ethical standards as we continue to fulfill our responsibilities to our clients.”

The five defendants are scheduled for an arraignment at 9am Monday.