With a million acres burning statewide and two major fires burning parallel to the east ad west of Santa Clara Valley, the skies today remain shrouded in a smoky haze.

But it stands to get worse.

The SCU Complex, which poses the most immediate threat to Santa Clara County, began as a smattering of fires sparked by a siege of lightning strikes. In the days to follow, the disparate blazes morphed into three major fires roaring through 340,000 acres from the Tri-Valley and South Bay in the west to Central Valley in the east.

The relentless advance of the SCU Complex triggered expanded evacuation orders today for residents along the border of Alameda and Santa Clara counties.

Issued in the wee hours of the morning, the new order applies to anyone in the Sunol Regional Wilderness area, as well as the areas east of Calaveras Road, south of Welch Creek Road to the fire perimeter and the Alameda-Santa Clara County line.

Click here for a Cal Fire map that shows where evacuations are currently mandated (highlighted in red) and where they’re strongly advised (yellow). 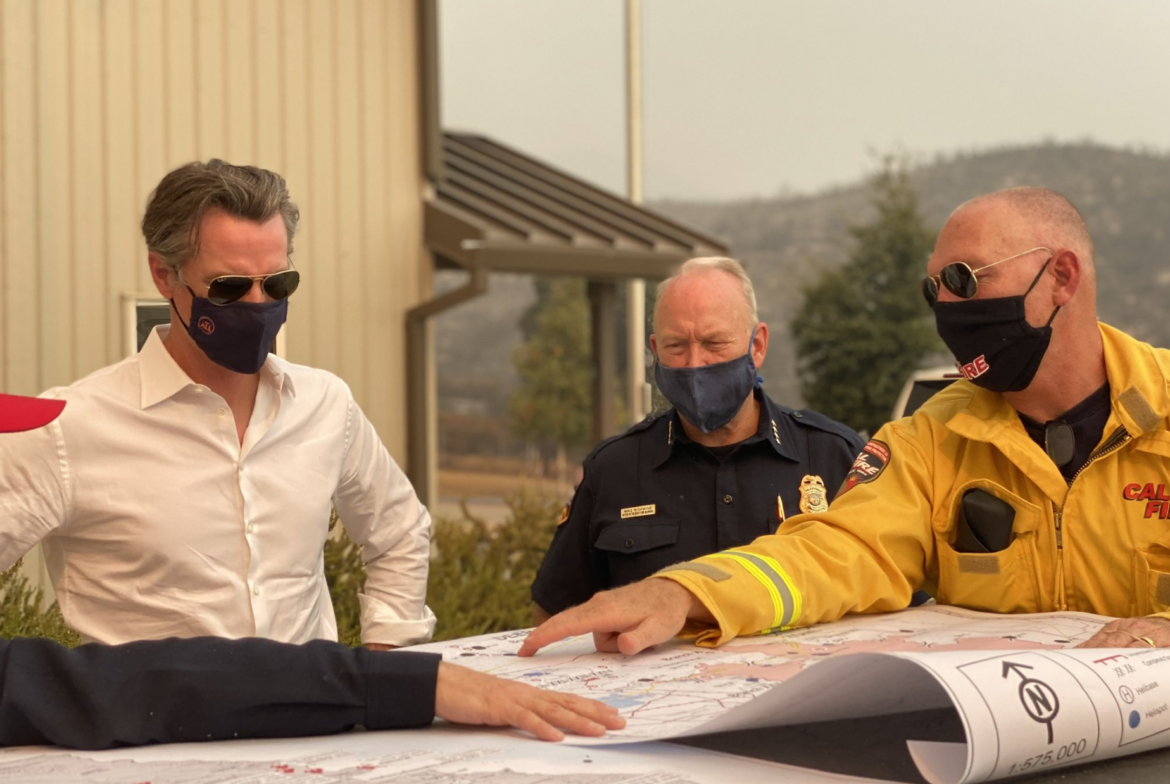 Another dry night kept the flames especially active in the Canyon zone—one of the SCU cluster’s trio of main fires spanning San Joaquin and Stanislaus counties.

Poor humidity and southwest winds also tested containment lines on its northern edge, as well as that of the Calaveras fire, which has devoured hundreds of thousands of acres of wildland in Santa Clara, Alameda and Contra Costa counties.

Gov. Gavin Newsom (right) during his visit to the SCU Complex Saturday. (Photo via Office of the California Governor)

“The period of main concern on the SCU Lightning Complex will be Sunday evening and overnight into Monday morning,” Cal Fire reported in its morning memo. “Even if the storms miss the complex, gusty outflow winds from nearby cells will be of concern for fire growth and firefighter safety in the next few operational periods.”

Today, Cal Fire said the state will deploy aircraft to help with perimeter updates on the complex east of Santa Clara Valley—the second-largest fire currently burning in California next to the LNU fires in wine country.

Further objectives, per Cal Fire, include keeping crews and civilians safe and protecting the tens of thousands of buildings and critical communications and transportation infrastructure—all with an unprecedented shortfall of resources.

The next SCU Complex update is set be livestreamed on Twitter at 4pm today.

Quick snapshot of the view from the ground of the SCU Lightning Complex damage. ? pic.twitter.com/NEdqzJVdm0

On the western side of Santa Clara Valley, the CZU Complex swelled to 67,000 acres—incinerating vast reaches of the Santa Cruz Mountains and up through the Peninsula.

So far, 77,000 people have been evacuated from the mountain fires, which have incinerated 115 buildings and scorched the ancient redwoods of Big Basin State Park.

By the latest measure from Cal Fire, the CZU is just 5 percent contained.

The LNU Complex of lightning fires up in the North Bay have consumed more than 340,00 acres, becoming the second biggest fire in California history since record-keeping began about a century ago.

At 17 percent containment, the LNU fires have destroyed 845 buildings, damaged 231 others, injured several civilians and firefighters and and killed four.

Statewide, 13,000 firefighters are battling an unprecedented array of conflagrations.  With California firefighters stretched so thin from battling so many fronts all at once, Gov. Gavin Newsom has called on other states as well as Australia and Canada for help.

“We now are engaged formally with mutual aid from 10 different states,” Newsom told reporters at a Friday press conference. “We’ve been on the phone with governors all throughout the United States, not just the Western states, trying to reach out as far as the East Coast to see if we can get resources here into the state of California. And not one governor has not been responsive.”

Thank you to @calfireSCU and all the volunteers working around the clock to keep Californians safe. pic.twitter.com/wO26ebLJzF

During a tour of the region on Saturday, the governor flew into the SCU Complex evacuation zone to survey the damage. In a tweet hours later, he posted photos that showed aerial views of the fires east of Mt. Hamilton and commended Cal Fire “and all the volunteers working around the clock to keep Californians safe.”