An old yellow cottage in Delmas Park has become a point of contention in a debate about the future of downtown San Jose.

When Dean Hanson bought the 96-year-old single-story home at the corner of Lorraine Avenue and Montgomery Street, he had a vision of replacing it with a six-story apartment. The 5,000-square-foot corner lot lies in the thick of a blighted neighborhood north of I-280 and west of Highway 87, ostensibly ideal for the kind of dense development Hanson proposed.

Shortly after acquiring the house this spring for $450,000, he asked the city to rezone the parcel from light industrial to commercial, which would allow for housing and ground-floor retail. The request comes up for consideration at Tuesday’s City Council meeting.

But the tight-knit community of 1,000 residents soundly opposed the plan pitched by an out-of-towner (Hanson lives in Folsom). First of all, it would add no new parking in an already car-crowded corner of town, residents argue. And second, they say, it would continue the practice of splitting up the neighborhood through scattershot parcel-by-parcel development. 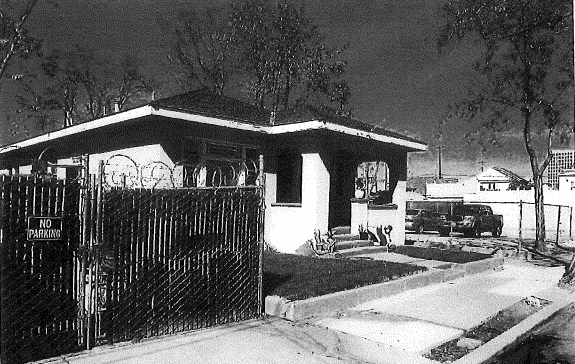 A home next-door to a razor-wire-fenced body shop on Lorraine Avenue, where incompatible zoning has led to a proliferation of unlikely neighbors. (Photo by Phil Hood)

In the 1950s, the city opened up the neighborhood, which once consisted entirely of single-family homes, to industrial uses. The result: a hodgepodge cluster of homes sidled alongside smog stations, warehouses and concertina wire-encircled auto body shops.

“The proposed development which accompanies this request for rezoning echoes the mistakes of the 1950s,” Delmas Park resident Phil Hood wrote to the city, protesting Hanson’s plan. “If you allow the development by fight of a six-story building on a .10 of an acre lot on a street lined with single-story homes without a comprehensive look at the surrounding area and no guarantee that development will integrate with anything else—history will likely repeat itself."

Hanson’s potential micro-development also complicates matters for a family that spent the past four decades buying up the bulk of the neighborhood.

Nick D’Arpino began working at S&S Welding in 1959, bought the business in 1970 and proceeded to collect property around it. The D’Arpinos now own 81 percent of Delmas Park—26 parcels in all. They’re holding out for the city to implement its Diridon Station Area Plan, an ambitious blueprint to transform 250 acres of downtown into dense, public transit-friendly hub of housing, industry, retail, entertainment and, just maybe, a new A’s stadium.

“When fully developed the Diridon Station Area will be the economic engine of San Jose,” Ron Biagini, the D’Arpino family lawyer, wrote to the city. “It will be a premier urban village second to none anywhere in the country. How extraordinary is the opportunity before us to redevelop five acres of land within the Diridon Station Station Area on a fresh, clean pallet?”

While Hanson’s plans fit in with conventional city zoning, they fly in the face of the D’Arpino family’s efforts to pave the way for cohesive development, like a destination with hotels, shopping centers, town homes and public spaces, Biagini continued.

“In the past few months, in talking to council members and planning staff, it has become clear that there are policies in place to support and promote infill development of small paresis of less than 10,000 square feet,” he wrote. “But these same polices also make it visually impossible for private assemblers, like the D’Arpinos, to finish their task.”

Deanna Libert, also part of the D’Arpino family, said she worries that approving Hanson’s rezoning request would set a risky precedent, allowing other micro-developments to build away without any parking accommodations.

Hanson reminded the planning commission in earlier meetings that the D’Arpinio family could have bought the house at 565 Lorraine Ave. when it was on the market this March, but did not.

Downtown Councilman Sam Liccardo isn’t too keen on Hanson’s vision for the site. But, he acknowledged, the property owner is incentivized to pursue piecemeal development by the city’s own rules, which allow projects on less than 10,000 square feet to provide no parking. The city’s trying to change that.

“With the adoption of the Diridon Station Area Plan, the council has explicitly directed that we untangle these incompatible uses and work to create a more integrated, consistent urban design, in part, by incentivizing consolidation of parcels,” Liccardo wrote in a memo.

Planning commissioners already denied the rezoning request. It’s up to the council to make a final decision.