A fifth Santa Clara County sheriff’s deputy has tested positive for COVID-19 and is currently quarantined at home. The deputy worked in the Custody Bureau with some of the other officers who previously fell ill from the highly contagious virus.

“At this point, there is no evidence to show that any inmates have been exposed as a result of the deputies,” Sgt. Michael Low said in a news release. “The four custody deputies that tested positive all worked on the same team. As a precaution, three other deputies assigned to the same team that have not displayed any signs or symptoms have been self-isolating at home.” 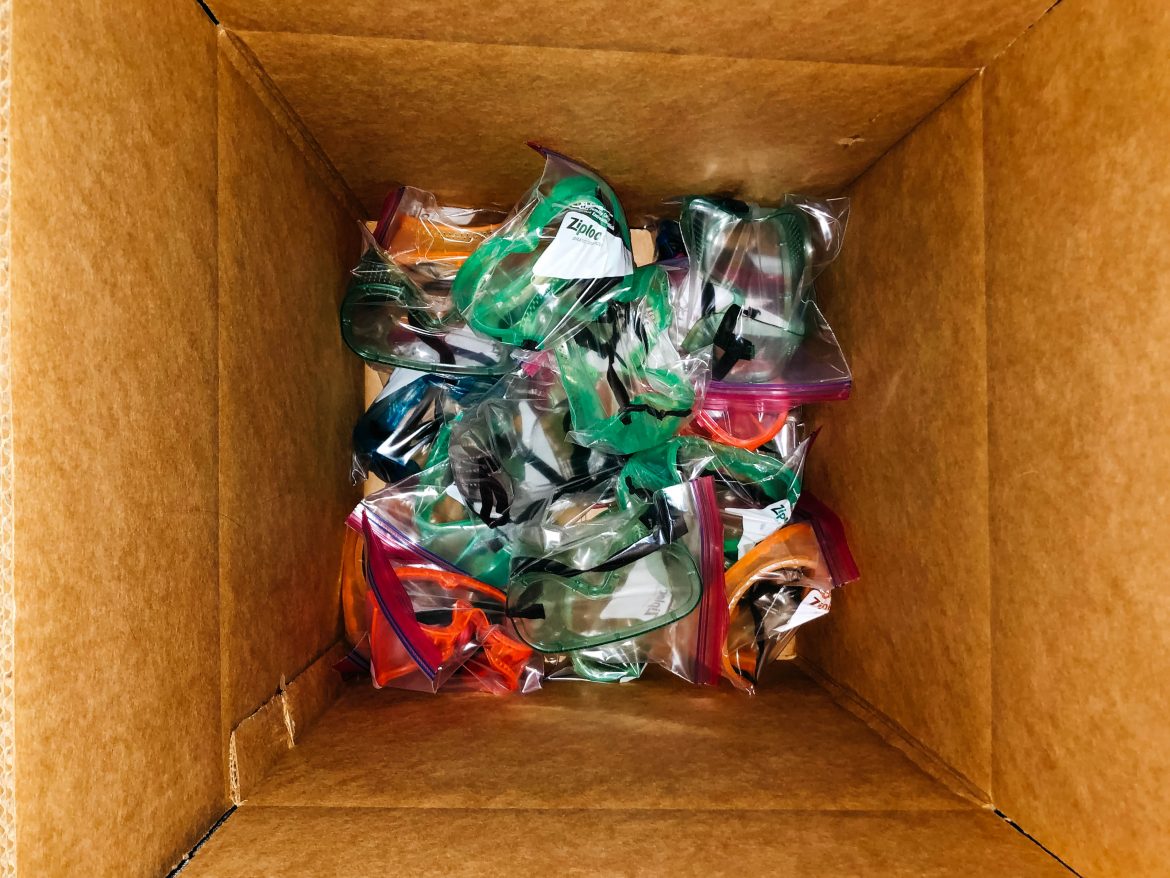 (Courtesy of The Tech Interactive)

The safety glasses and goggles were had been used for activities and programs in the museum’s labs, but were UV sterilized by The Tech and packaged individually before being donated.

Santa Clara County health officials reported out the largest spike in new cases of COVID-19 on Wednesday afternoon: 84. There have now been 459 total confirmed cases since the first one was reported on Jan. 31, although county officials expect the actual number is in the thousands. 137 people have been hospitalized.

Health officials also reported that one more person has died, bringing the local death toll up to 17. Information about the individual’s age or whether they had a pre-existing condition was not readily available.

The Santa Clara County Public Health Department also released an age group breakdown of cases on Wednesday. So far, 41 to 50-year-olds represent the largest number confirmed cases with 101 total, while those under the age of 20 represent the smallest fraction at 17.

Gov. Gavin Newsom’s daily press briefings have become a staple for Californians looking to keep up to date with the latest on the spread of the coronavirus. On Wednesday afternoon, Newsom solidified why one study ranked the Golden State first in taking the most aggressive action in the country against the pandemic.

The governor announced that 24.5 million N95 respirator masks have been delivered to health care workers and 100 million more are on the way. A yet to be disclosed number of gowns, shields and other personal protective equipment is also in transit.

“For those health care leaders that are demanding more and deserve more, I want them to know when those get off the docks, when they get through the airport in customs we’re going to get them out as quickly as we humanly possibly can,” Newsom said.

Newsom also addressed the state’s financial well being—or lack thereof—by stating that more than one million Californians have filed for unemployment since March 13. Wells Fargo, Citi Bank, JPMorgan Chase and US Bank have all agreed to waive mortgage payments for 90 days for those that have been impacted by COVID-19. Bank of America will be waiving montage payments for 30 days, and 200 state charter banks and credit unions will provide forbearance on foreclosures and mortgage payments.

But while homeowners are getting some financial relief, reporters pressed Newsom on why he has yet to enact a statewide eviction moratorium. The governor signed an executive order the other week that would allow local lawmakers to pass their own moratoriums. However, supporters of the blanket policy say only 50 local governments have done just that.

I am joining over 30 of my colleagues on a letter to advocate for a statewide moratorium on evictions during the #COVID19 crisis.

CA has taken some good steps on this front, but we need to go further.

A comprehensive statewide approach is needed to keep people in their homes. pic.twitter.com/Dp0iNqaC3X

Newsom responded to the criticism, stating that his team has been “working overtime” on reviewing the legal parameters of a statewide moratorium.

When it comes to ramping up testing, the governor said more than 66,000 people have been tested in California—an increase of more than 27,000 from the day prior. 2,535 people have tested positive and 53 have died as of Wednesday morning. 51 percent of the confirmed cases fall into the 18 to 49 age group, prompting Newsom to call on young people to follow the stay at home order.

“We can bend the curve,” he said. “We can defeat this virus. But we can’t defeat it unless we commit to fulfilling our individual obligations and our collective responsibilities to meet this moment.”

With less people venturing out to work or school, the Santa Clara Valley Transportation Authority will be slimming down its service starting Monday, March 30.

Light rail frequency will be cut back to two-car trains running every 30 minutes, and all bus and light rail routes starting after 9 pm will be cancelled, except for Route 22. The Express 181 bus, which travels from Diridon Station to the Warm Springs BART station, will also be adjusted to match BART’s reduced schedule.

Schools throughout the Bay Area are going to stay closed a little bit longer than originally planned. Seven Bay Area county health officers and six county school superintendents made the announcement this morning that students will not attend in person classes through May 1 to help slow the spread of the coronavirus.

“The well-being of our student’s, families and communities is our primary concern,” Santa Clara County Office of Education Superintendent Mary Ann Dewan explained. “We will continue to take all necessary steps to prepare schools for reopening. Meanwhile, it is absolutely crucial that we work together to slow the spread of COVID-19, by adhering to the shelter-in-place orders and continuing to support learning at home.”

Last week, California Gov. Gavin Newsom told us that K-12 campuses could potentially stay shut for the rest of the school year.

The confirmed case count in Santa Clara County is somewhere around 400. But officials now say the actual number of people infected with COVID-19 is much, much higher.

The disparity owes to the intractable lack of testing we’re seeing in the U.S. A dangerously slow response on the national level put everyone behind the curve in fighting the pandemic. And now, we’re playing defense, as we reported in our cover story this week, which you should definitely be sure to read.

The good news is that statistics are showing the effectiveness of the dramatic lockdown measures in place. Compared to counties that let spring breakers party on the beach or revelers celebrate Mardis Gras without a care in the world, we’re seeing a relatively flatter curve on epidemiological charts tracking the viral outbreak.