Michelle Thong, stationed behind a Macbook plastered with a whimsical whale sticker, surveys the eclectic clutch of volunteers perched on swivel-seats at a narrow conference table in one of San Jose’s warmly lit co-working spaces. “Lots of new faces today,” she chirps. “That’s good—that means more ideas to go around.”

In addition to working as a business officer for San Jose’s Office of Economic Development, Thong is co-founder of Code for San Jose, a collective of civic-minded hackers, computer programmers, user experience analysts, a librarian, coders, engineers, a self-described “social media gnome,” various public sector employees, a marketing rep for eBay and someone who trains astronauts for NASA.

Over slices from Pizza My Heart, they chat about how to carve something meaningful out of the mountains of inchoate data available from public agencies.

Across the table, Daniel McCue tweaks a website that allows bicyclists to look up and report road hazards. A brainchild of fellow brigade member Zhila Emadi, the Cycle Safe Project is meant to appeal to the South Bay’s booming cycling scene.

“I’ve been plugging away at it whenever I have time,” McCue says, taking a break from shaping prevenient code into something more functional.

Emily Ramos, who manages social media for the Tech Museum of Innovation, has fine-tuned a website that makes it easier to track money in the San Jose mayor’s race.

A sleek beta version shows that, leading up to the June primary election, Supervisor Dave Cortese culled 48 percent of his monetary support from outside San Jose. Councilman Sam Liccardo, 55 percent.

“We really want to gear this up for the election,” says Ramos, a Code for San Jose regular. “The information is already there, it’s just we laid it out in a way that’s simpler to digest.”

“Whatever you want to explore, that’s what you’ll work on,” Thong says, citing examples of what designers, data geeks, policy wonks and coders dreamt up in other communities. “This is a ‘bottom-up’ organization—we’re a platform for citizens.”

Six months ago, Thong teamed up with Kalen Gallagher, a startup entrepreneur by day and Campbell Union High School trustee by night, to form Code for San Jose. “I wanted to do something that was related to my interest in environmental and social challenges,” she says. “Being involved with Code for San Jose became an interesting marriage for me of what I do now in local government and what I used to do in the technology sector.”

The group meets every other Thursday and is one of scores of brigades, as members call them, spun off from Code for America, a national nonpartisan nonprofit that aims to “harness technology to solve community problems.” 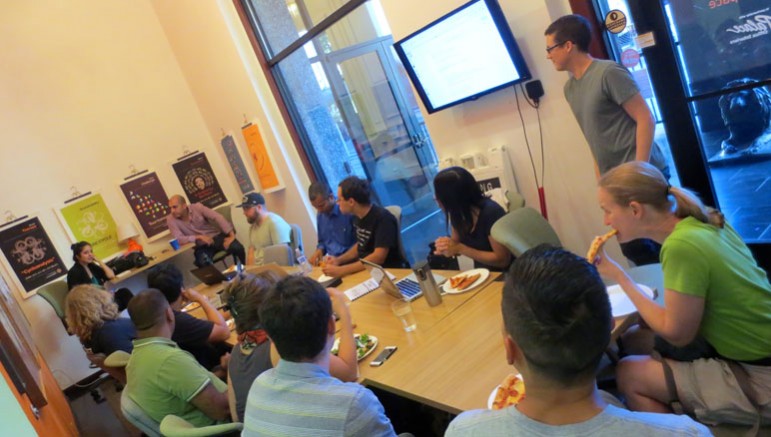 Code for San Jose meets every other Thursday.

In San Francisco, when a third of food stamp recipients were unnecessarily cut from benefits, Code for America created an app called Promptly, which sends text alerts to keep the needy enrolled in public assistance.

In Oakland, volunteers developed a participatory budgeting app to make it easier for citizens to influence the municipal budget. Hundreds of residents also came together to redesign the city website in a single day.

Everything created by brigades is open source, shared freely among communities. Newcomer cities like San Jose aren’t starting from scratch.

“I think there’s a lot of talent in this city,” adds Gallagher, who in black-framed glasses, dark-wash Levi’s, tweed Van’s and a T-shirt looks every bit the teacher-turned-techie. “I grew up here, worked here, taught school here and, after getting elected, saw firsthand how government works.”

Which is to say, not efficiently enough.

The data is there—homelessness, dropout rates, demographics, income levels—data that, depending on how it’s used, Gallagher suggests, “can free our community.”

After years of lobbying by nonprofits, journalists and technologists, government at virtually every level is promoting open data, galvanized by the idea that information belongs to the public as much as roads, parks and libraries.

The U.S. Census, he points out, stirred up contention over what questions were asked, how they were asked and what was done with the information. The stakes are high—congressional representation and hundreds of billions in federal fund allocations—but the numbers are rife with inaccuracies. Immigrant populations are often under-counted. In 1990, the census errantly totaled an extra 4 million white people.

Another source of controversy could be law enforcement stats. In San Jose, the number of citizen complaints against officers has been an open book. But while community complaints against officers have become more frequent, the San Jose Police Department dismisses virtually every one of them. The data shows that citizen complaints against cops in 2013 reached their highest point in four years, yet the department conducted 83 percent fewer internal investigations into officer misconduct. What the data doesn’t show is the cause for the dramatic drop. Are cops better behaved, understaffed or are they more inclined to look the other way if a colleague screws up?

Thong would rather not speculate, saying she wants group members to decide which topics to tackle. “The movement really is in its early stages,” she says. “We’re still working the basics and trying to get this group off the ground.”

President Obama launched a federal open data portal in 2009, but it took several years before other Bay Area municipalities localized the idea.

San Jose rolled out an open data initiative in 2013, starting with permit-tracking software to give applicants a better idea of their project’s progress and keep city staff accountable. Later, it created a website to host demographics, graffiti stats, budget documents and other information. Palo Alto cobbled together its open data hub around the same time, teaming up with Stanford students for its first 24-hour hackathon challenge: coding an app using geographical data provided by the city.

In March, VTA posted an online survey asking the public what data to prioritize. A few topics emerged above the rest: real-time locations of all vehicles, ridership numbers and geo-coordinates of all stations.

“What is new is putting it in a more readable format,” Kraatz says. “That helps us internally as well by putting a fresh set of eyes on the data. We don’t know what people will do with all this information, but that’s kind of the point.”